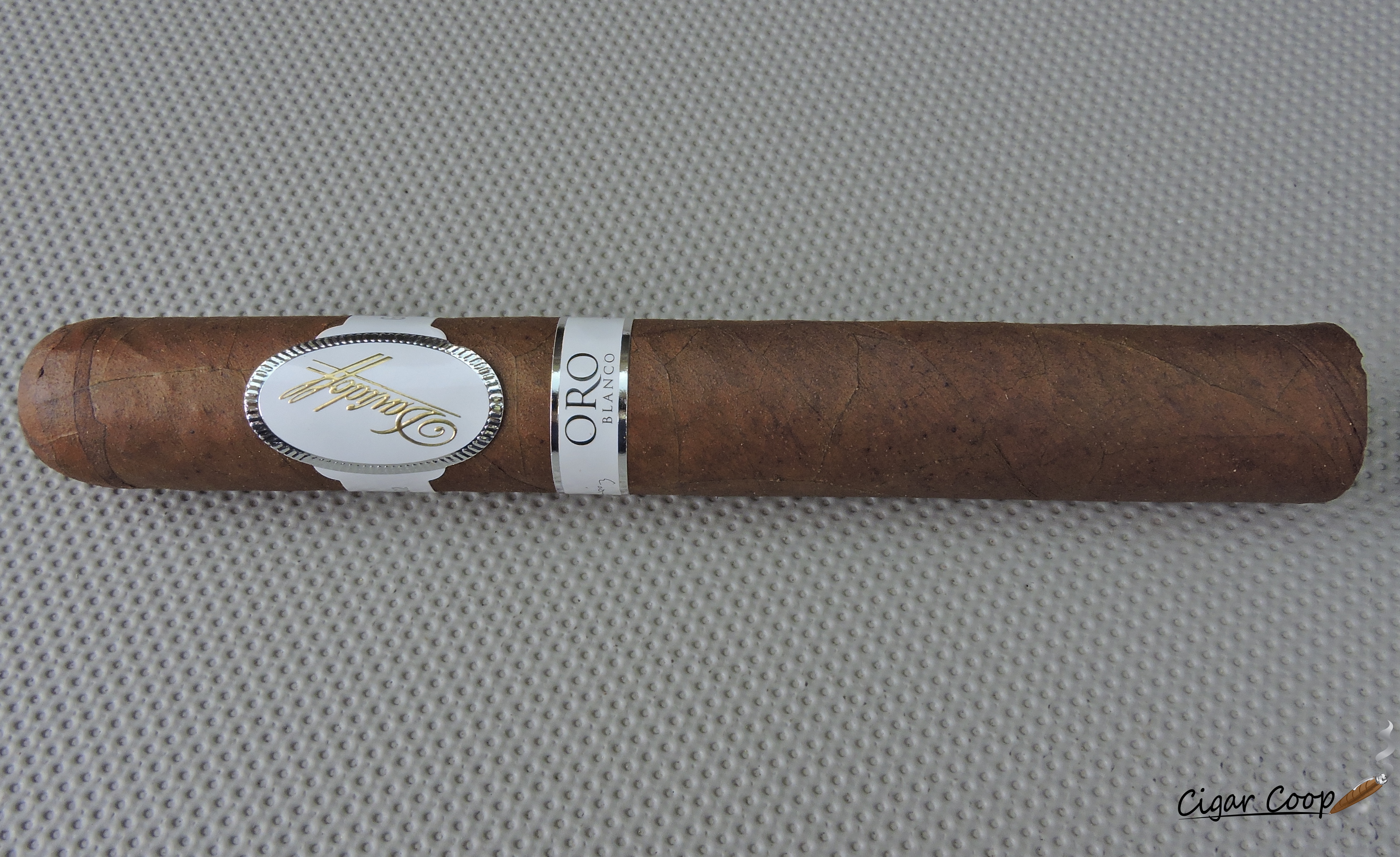 Back in 2014, word came that Davidoff was going to release its first vintage smoke of tobaccos from 2002 called Davidoff Oro Blanco. However, it wouldn’t be the vintage tobacco that would become the story. At the time Oro Blanco was announced, Davidoff CEO Hans-Kristian Hoejsgaard proclaimed it would be the most expensive cigar that would ever be made by Davidoff. Davidoff would keep people guessing for a while on the price, but eventually revealed this cigar would be priced at $500.00 per cigar. Today we explore the story of the Davidoff Oro Blanco, and I’ll give an assessment of my personal experience with smoking this cigar.

First up, let’s get right to the pricing thing. This is a cigar that is not positioned as an everyday cigar. It’s a cigar that plays in the luxury consumer product segment – and there is a market for that. For example, we’ve seen the pricing for Pappy Van Winkle Family Reserve 23 Year whiskey close to $3,000.00 per bottle. Davidoff also isn’t the most expensive cigar to hit the market either. Gurkha has two releases: His Majesty’s Reserve (infused with Louis XIII Cognac) and Gurkha Maharaja priced at $1,000.00 and $2,000.00 respectively. 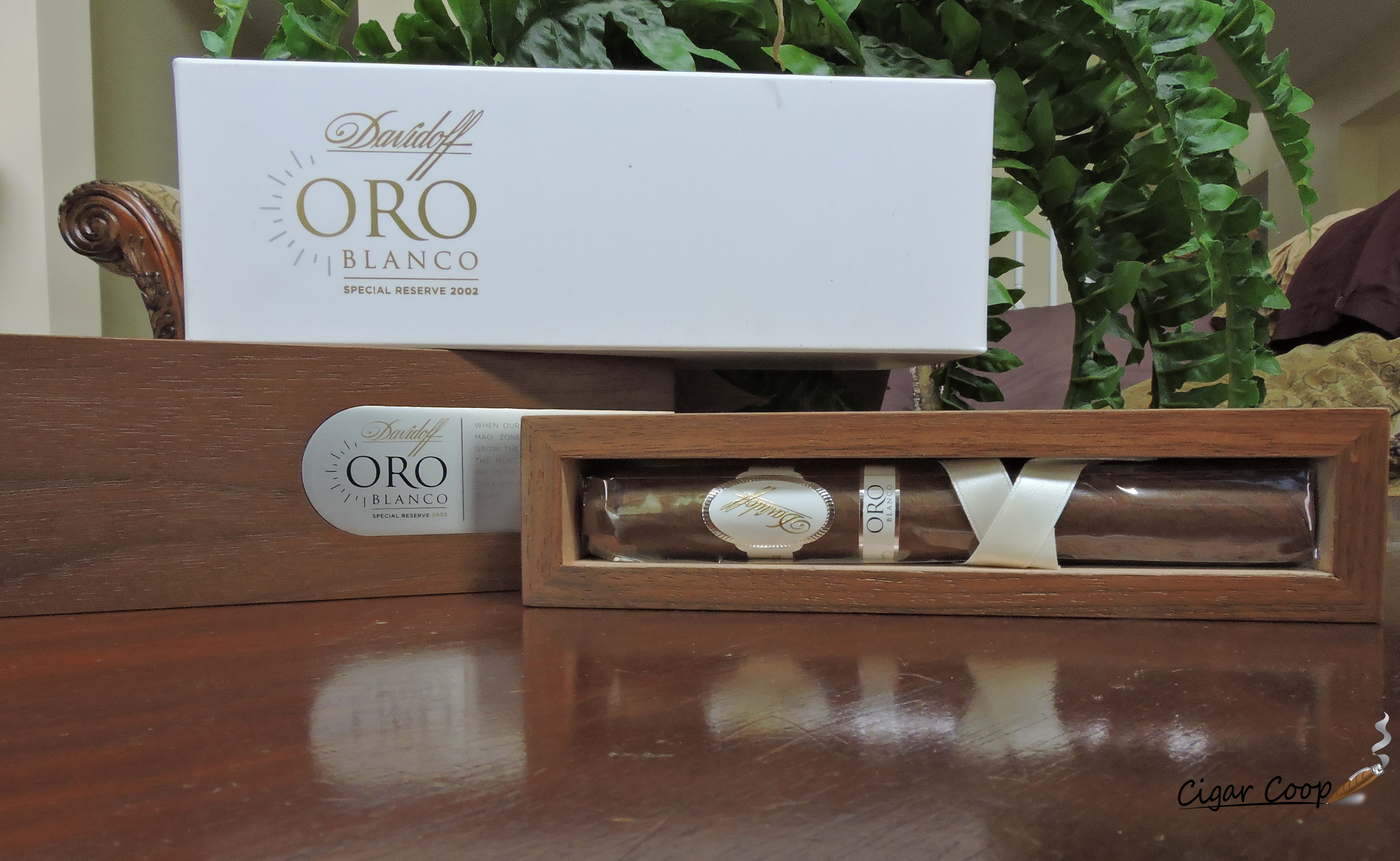 In terms of reviewing a cigar like this on Cigar Coop, we assess on only two components. The first is merit – which translates into a numerical score. The price is not factored into the numeric score. The second is our value assessment – where price plays a role in most cases. We will come back to these points at the end to discuss it.  While we are equipped to assess the cigar, it creates a dilemma in that it is very unrealistic to recommend someone go out and buy a $500 cigar. We faced this dilemma when we assessed the Padron 50th Anniversary (which initially retailed for around $100) and most recently with Dunbarton Tobacco & Trust’s Muestra de Saka Unicorn (which also had a $100 price point).

The tobaccos are a big part of the story here. According to Davidoff, all of the tobaccos used come from a 2000 to 2001 crop grown in the Mao region of the Dominican Republic where the Mao, Gurabo, and Yaque del Norte rivers meet. These tobaccos were aged for at least 12 years after harvesting. The blend was put together by Davidoff Master Blender Eladio Diaz and was rolled by some of Davidoff’s most skilled rollers with over 15 years experience. Because of the scarcity of the tobaccos and the skills required for this cigar, this is released in small batches.  The cigar used for this assessment was part of a batch that was released early in 2018. 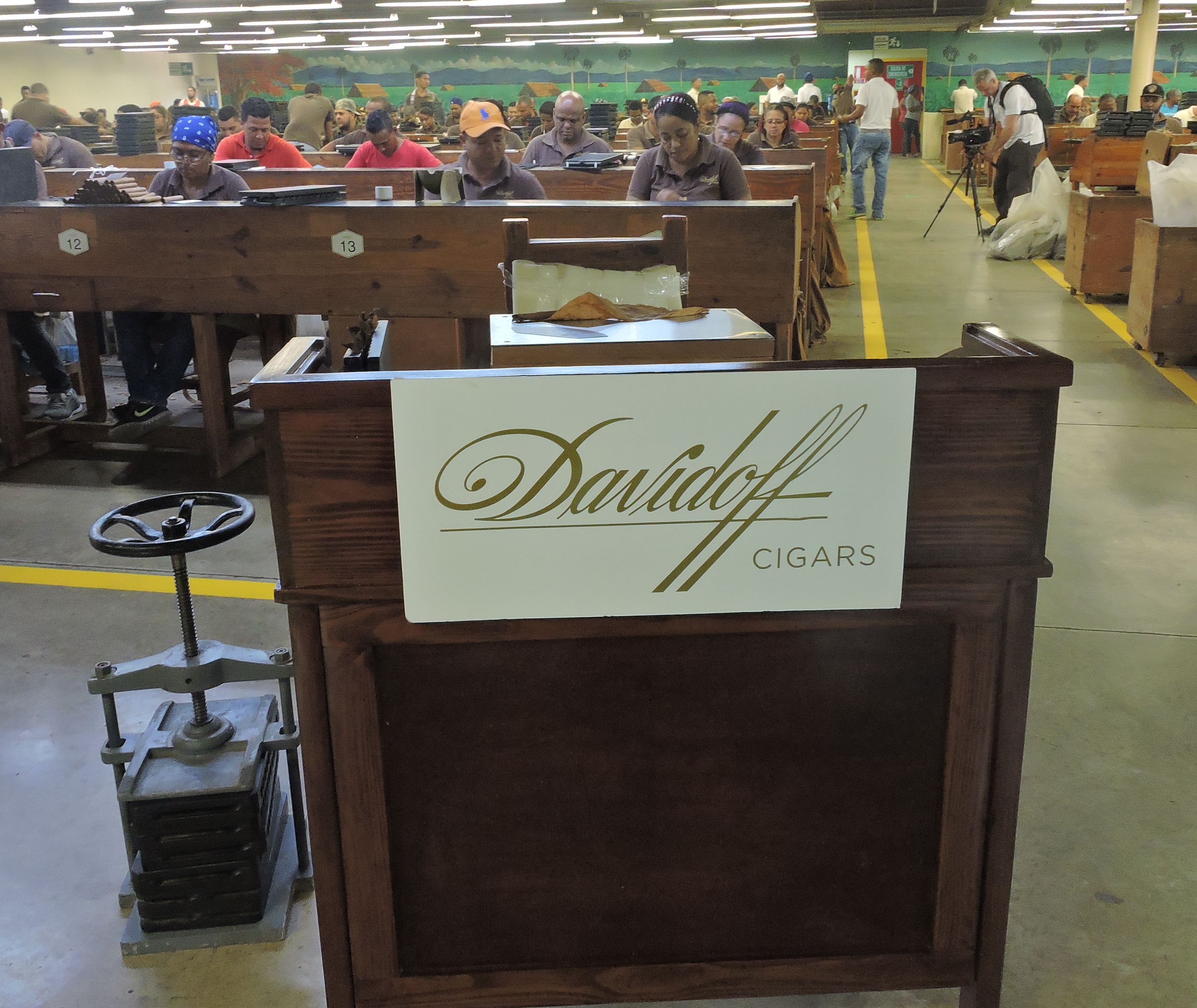 A Davidoff Master Rolling Table at the Cigars Davidoff factory

Finally, for most reviews, we do smoke at least two cigars. In the case of the Davidoff Oro Blanco, this was assessed on a single smoking experience.

As mentioned, the cigar is a Dominican puro from a 2002 vintage crop. 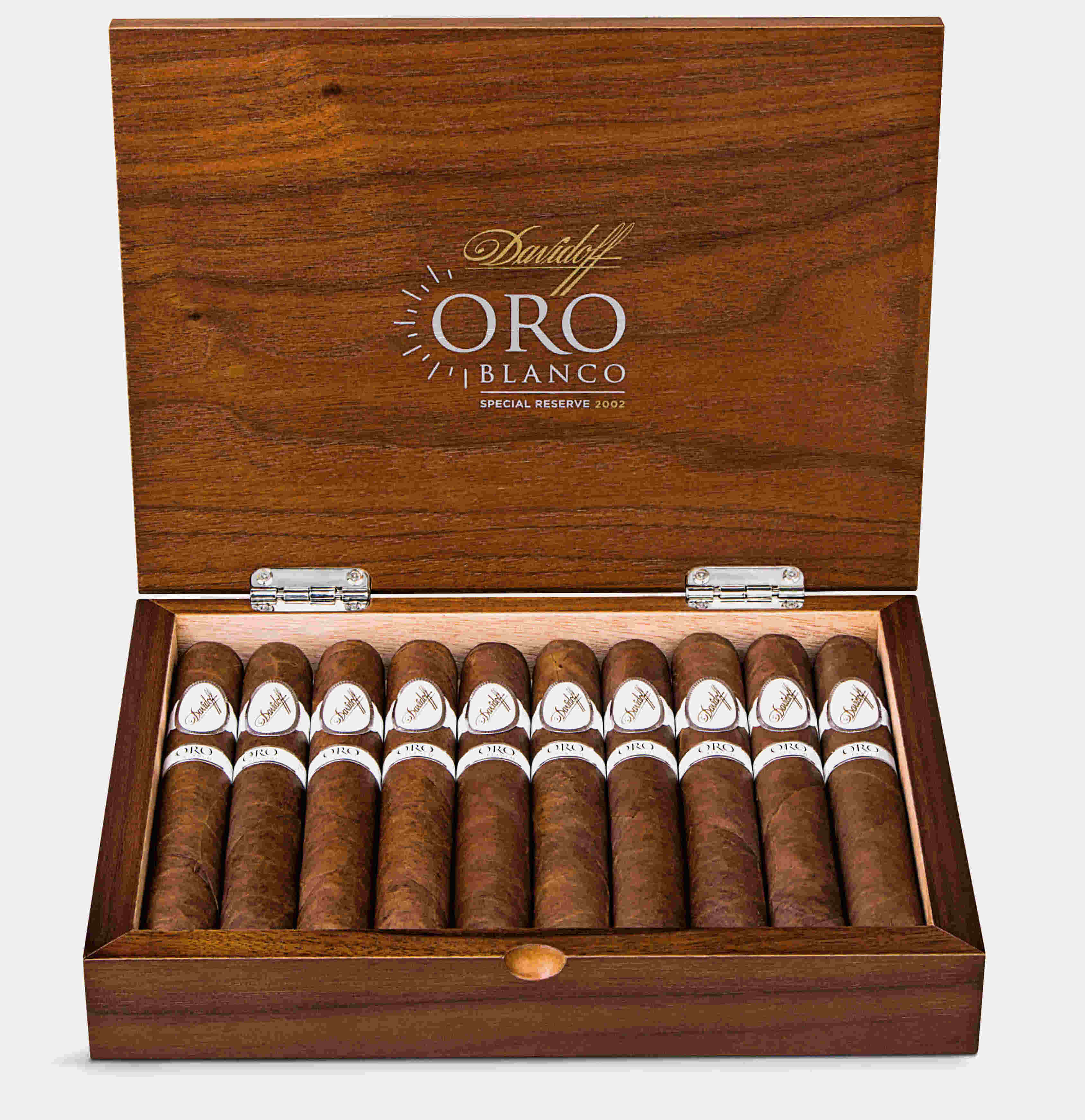 We will first breakdown the actual appearance of the cigar. We will also discuss the unique packaging for the single box option of the Davidoff Oro Blanco.

The Dominican wrapper of the Davidoff Oro Blanco was on the darker side. In fact, it looked one shade less than a traditional maduro wrapped cigar. There was a slight rosado tint to the wrapper. While there was some oil on the surface, the real story here is the texture of this wrapper. This texture was almost like holding silk. Holding the Oro Blanco in your hand, you can very much tell this is a true ultra-premium wrapper. There were some thin visible veins and thin wrapper seams. Finally, the Oro Blanco was a well packed cigar.

There are two bands on the Davidoff Oro Blanco. The primary band is a derivative of the classic Davidoff white band.  It features the name “Davidoff” in classic cursive gold-colored font on an oval field of white. The oval is surrounded with silver trim. The word “GENEVE” (in silver font) flanks to the right of the oval field. To the left of the oval, is the text “SPECIAL RESERVE 2002” in gold font.

The secondary band is white with silver trim on the top and bottom. Front and center on the band is the text “ORO BLANCO” in silver font. On the left side of the band is Eladio Diaz’s signature and to the right side is the text “MASTER BLENDER” – both in darker silver font. 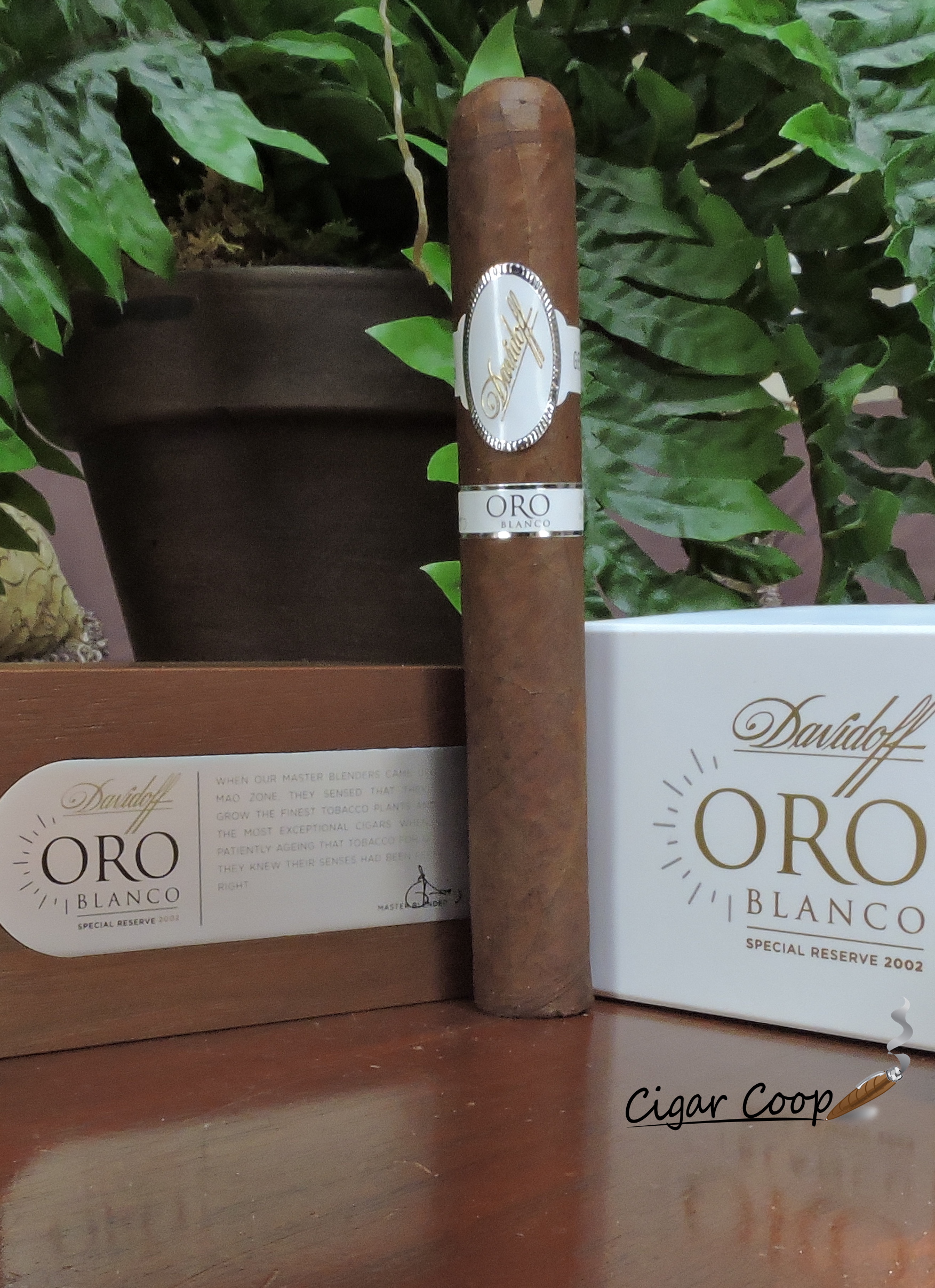 As mentioned abofe, for this cigar experience I  used the single-box packaging model.  This box comes packaged in a white colored cardboard box – complete with a warranty seal. 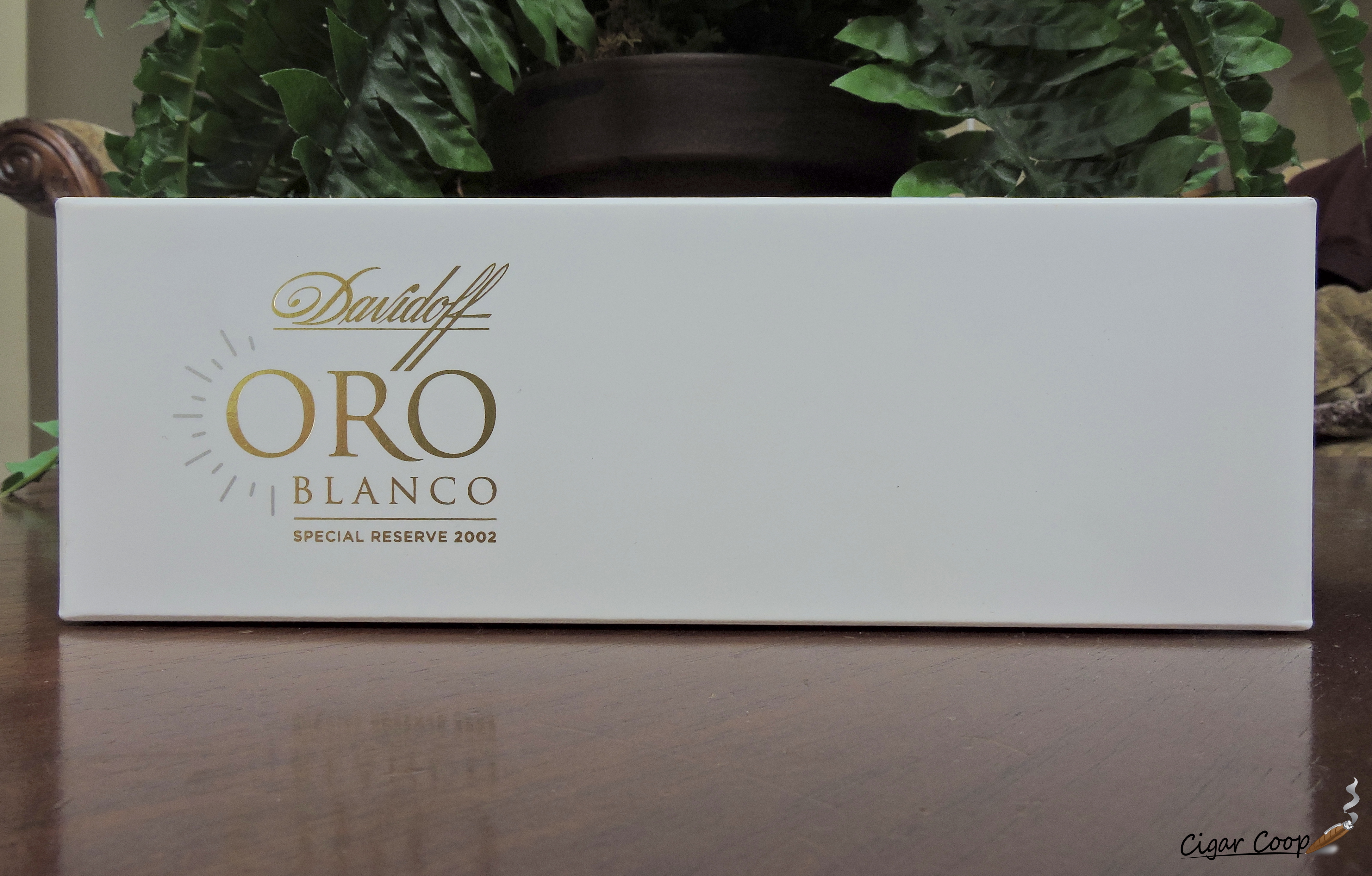 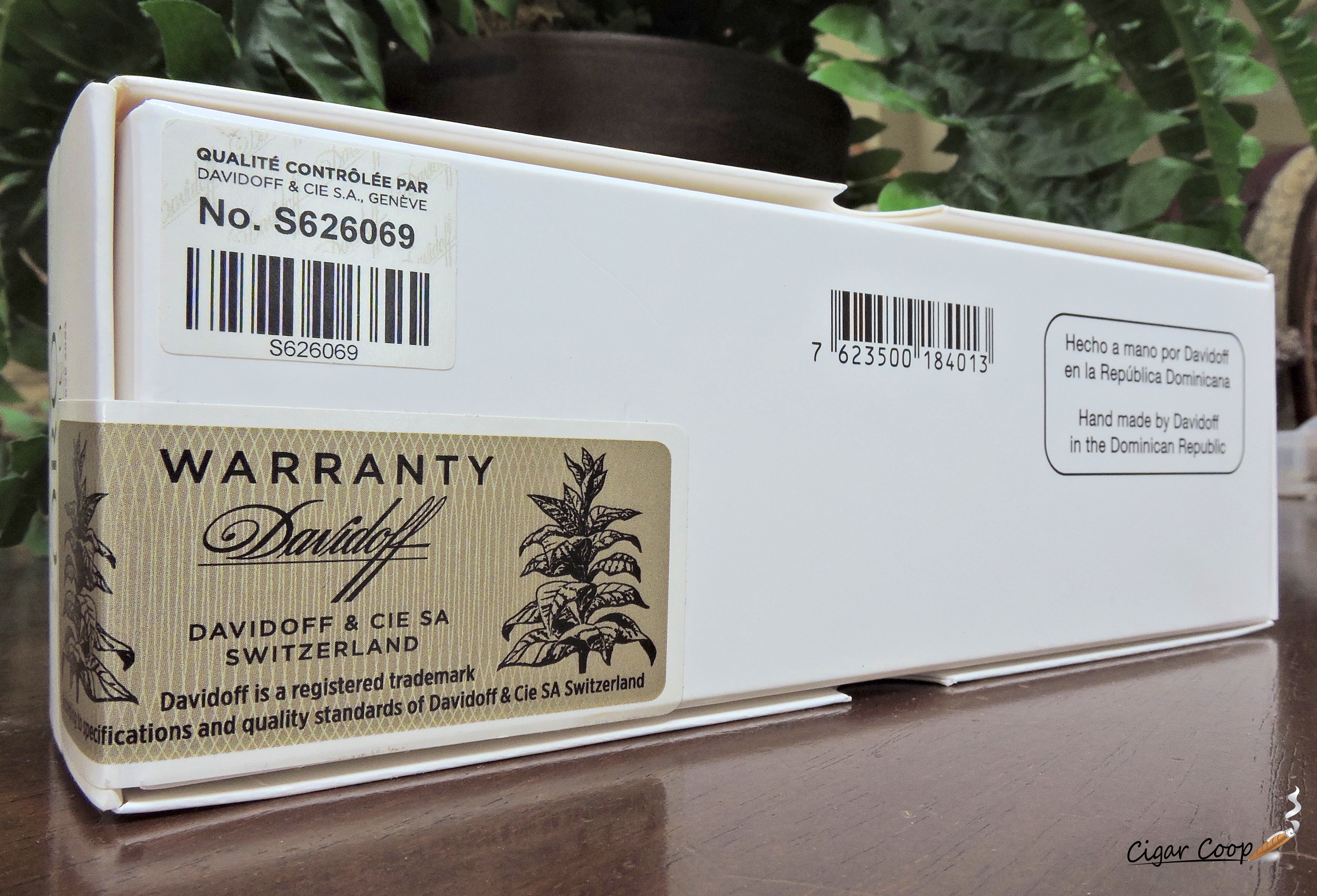 The box is made of wood with a metal name-plate on it. One thing about the actual box – it’s quite heavy when held in your hand. 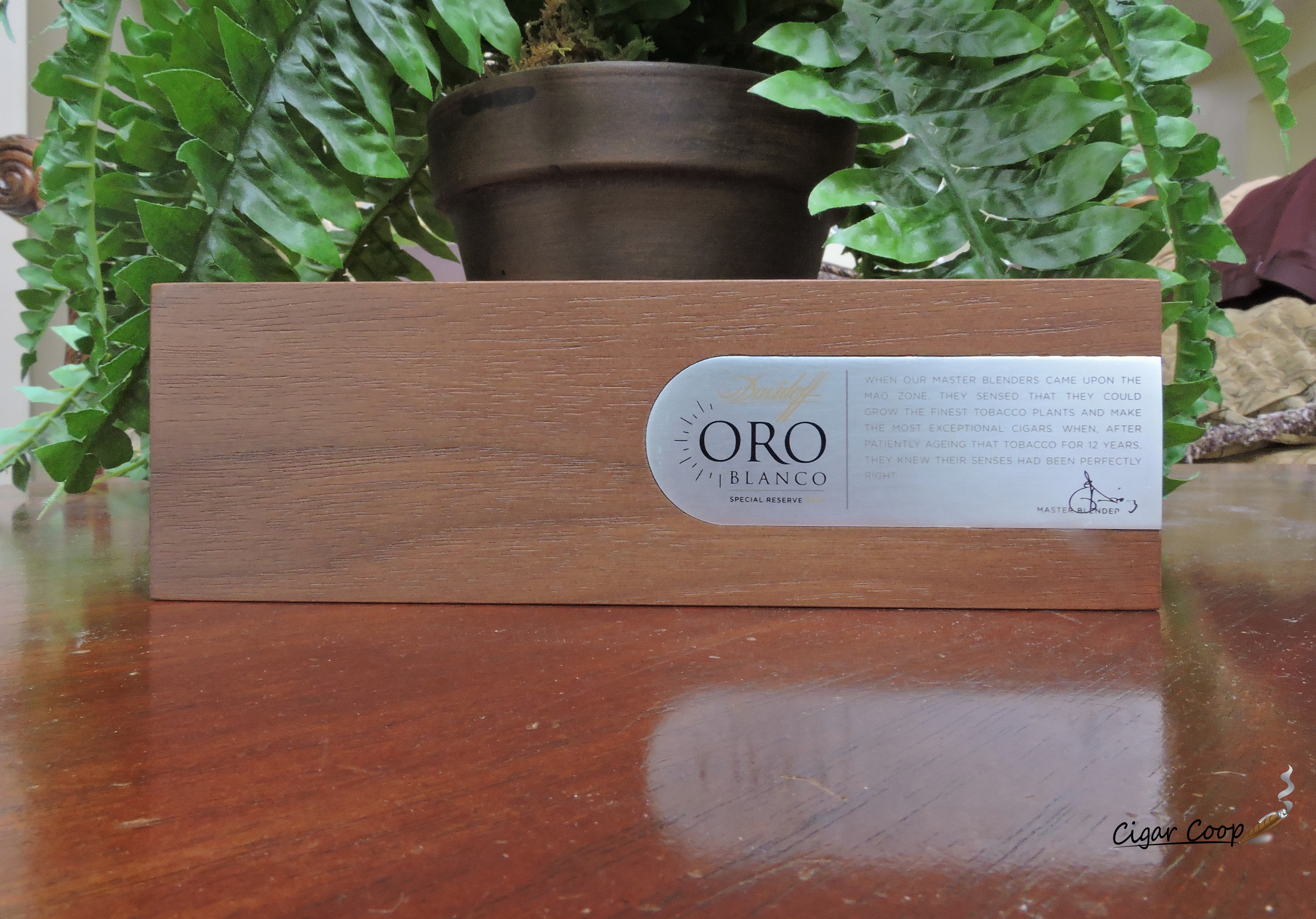 The coffin that houses the actual Davidoff Oro Blanco literally slides out of the side of the box. There is a strip of cedar covering the top of the coffin. 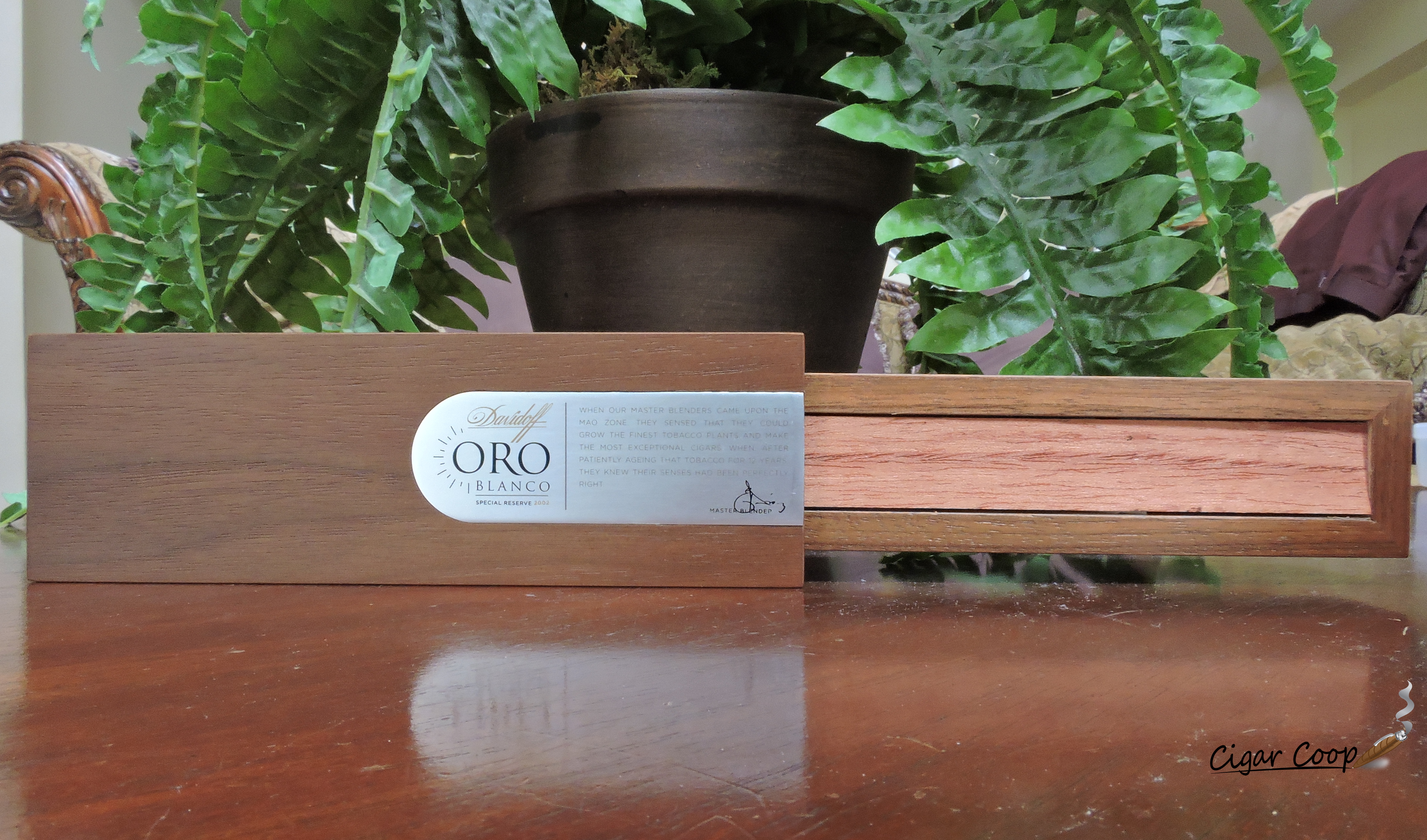 Coffin and the Individual Box of the Davidoff Oro Blanco

The actual cigar sits in the coffin with cellophane around it. 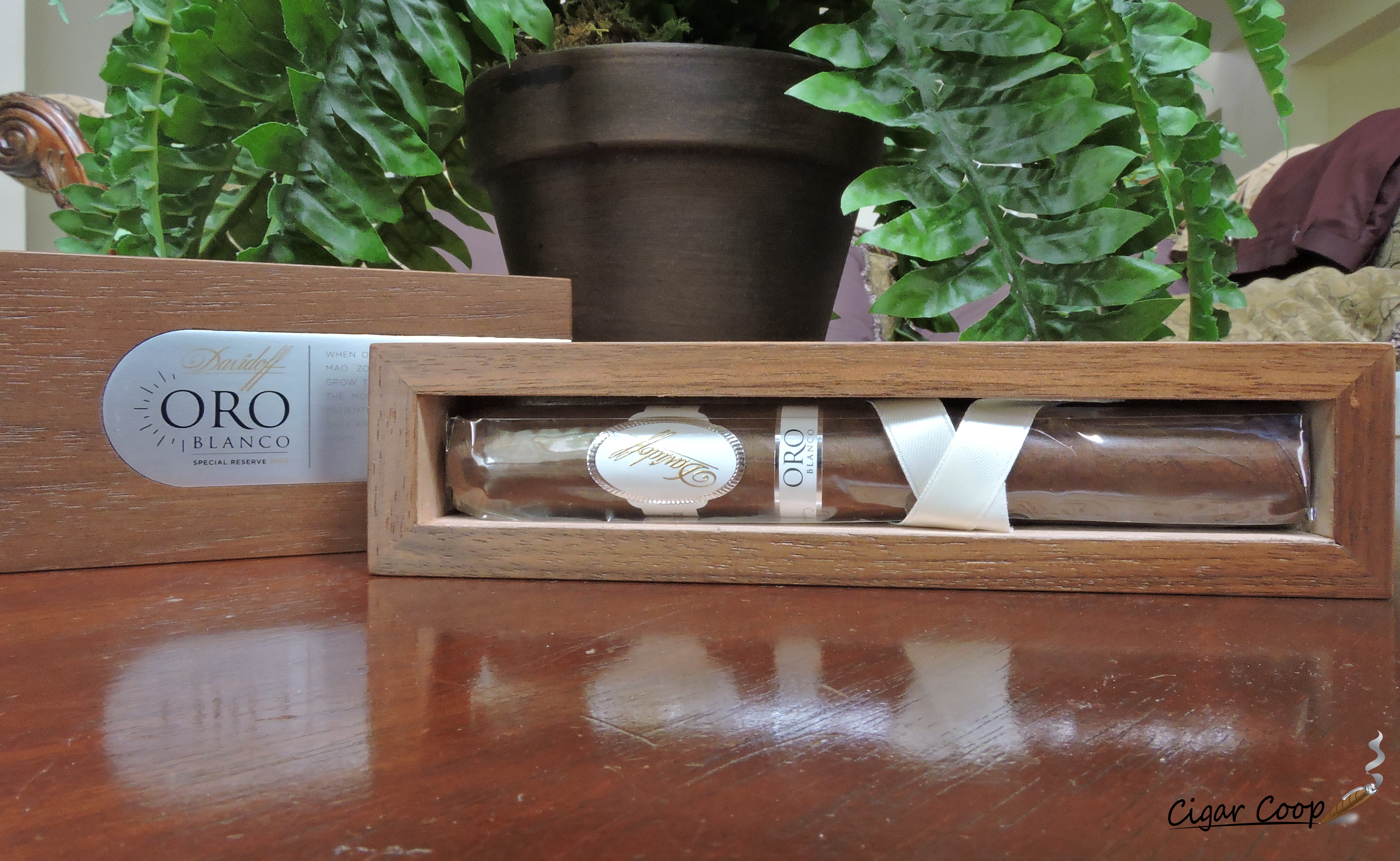 Coffin of the Davidoff Oro Blanco

Any time you are going to cut a cigar, a choice of cutter is extremely important. You want a sharp and clean blade to make the cut. When it comes to a cigar such as the Davidoff Oro Blanco, it is even more important.  If you mess up the cut, it could have catastrophic impacts on your investment. I opted to use my Colibri SV-Cut and specifically use a straight cut. Once the straight cut was made, I moved on to the pre-light draw. The cold draw delivered a mix of cedar, nut, earth, and natural tobacco. The flavors were definitely indicative of well-aged and well-fermented tobacco. Overall, I considered this to be an excellent pre-light draw.

The toasting ritual for the Davidoff Oro Blanco was as important as the first cut. The key here was not to blister this cigar and get a nice even burn to start things. I opted to use my ST Dupont lighter to accomplish this – and it was done successfully. 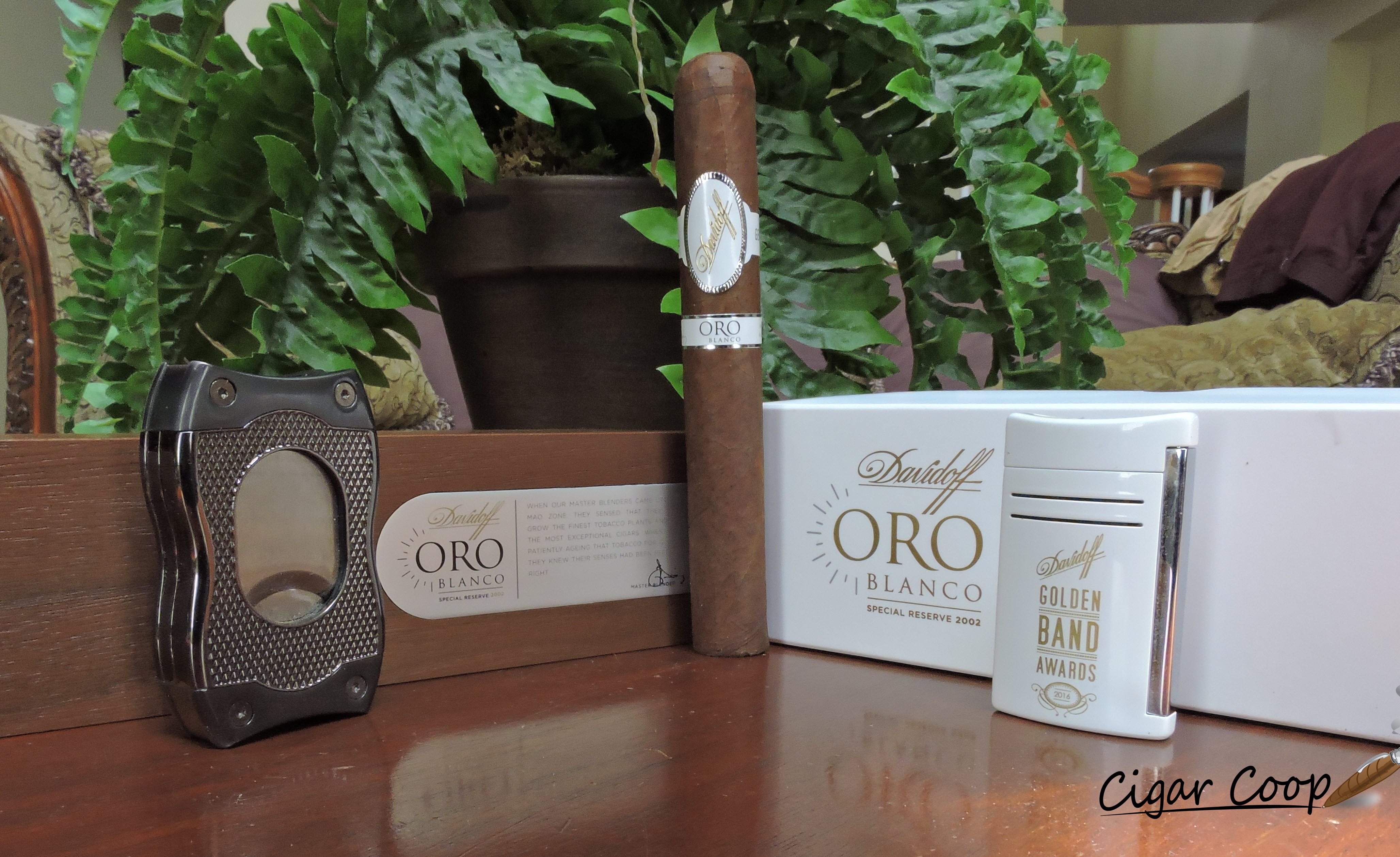 Out of the gate, the Davidoff Oro Blanco delivered a nice dose of cream and cedar notes. In the background, there was a combination of natural tobacco, citrus, and mushroom notes. As the Oro Blanco moved through the early stages, there was a subtle black pepper note that entered the equation as a background note. Meanwhile, the retro-hale produced a sweet cedar note.

When the second half of the smoking experience of the Davidoff Oro Blanco commenced, the natural tobacco notes remained in control. Of the background notes, there was still a nice amount of citrus and cedar.  The pepper notes held steady, but the mushroom and cream flavors had pretty much dissipated.

As the Davidoff Oro Blanco moved into the last third, a black coffee note joined the natural tobacco in the forefront. The black pepper slightly kicked up a little more and I could still detect cedar and citrus. This is the way the smoking experience of the Davidoff Oro Blanco came to a close. The resulting nub was firm to the touch and cool in temperature.

In terms of burn, the Davidoff Oro Blanco scored quite well. The cigar had no trouble maintaining a straight burn path. There was an occasional touch of jaggedness on the burn line, but for the most part, this didn’t warrant anything in the way of additional or frequent touch-ups. The resulting ash was medium gray. This was a firm ash that came off the cigar in clean chunks. As for the burn temperature and burn rate, both were ideal. 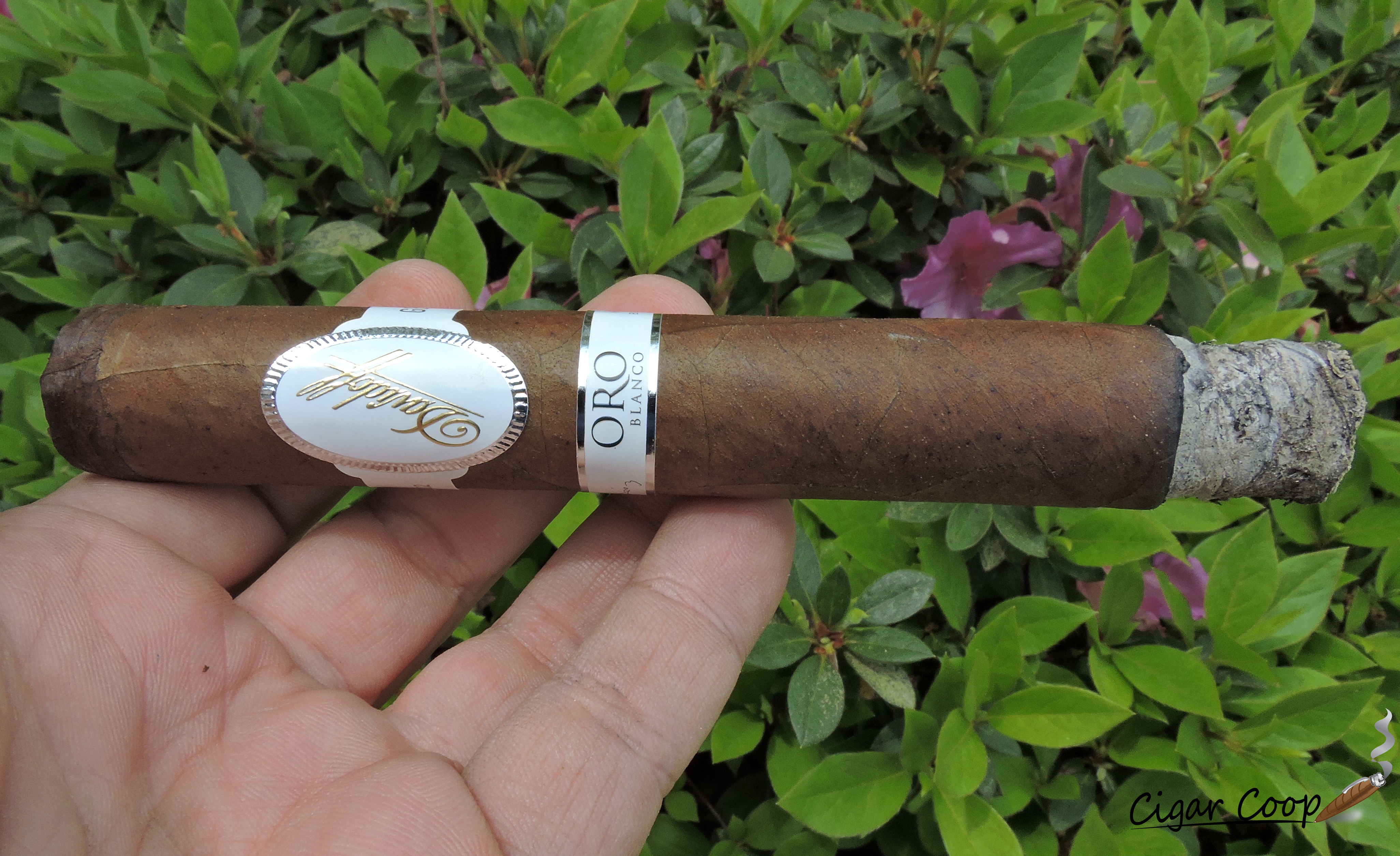 I found the draw to the Davidoff Oro Blanco to be outstanding. It had a touch of resistance – which is something that I like. At the same time, this was a cigar that I found had a nice amount of smoke production. 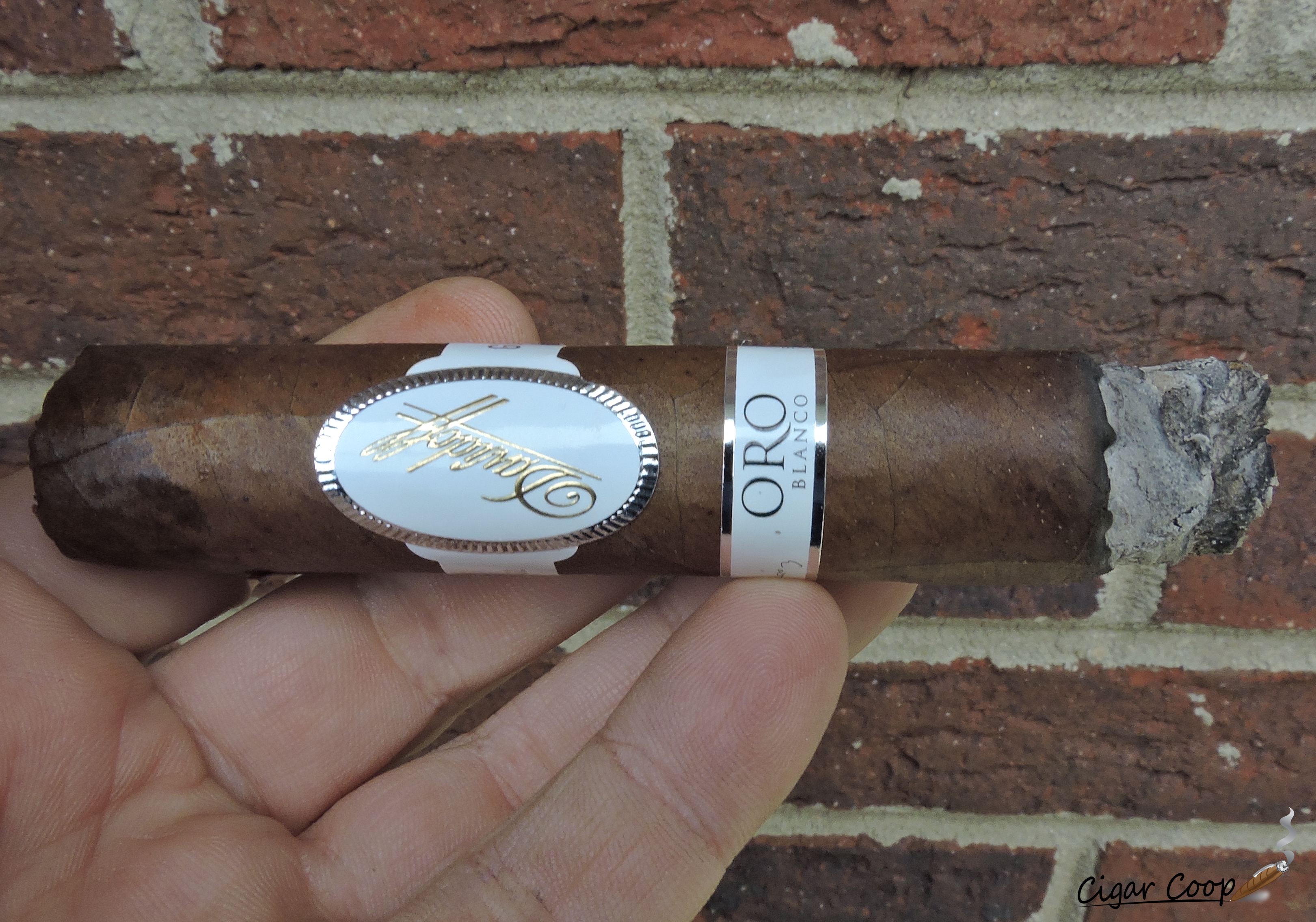 I found the Davidoff Oro Blanco to be on the upper end of medium for both strength and body. Along the way, there was a slight increase in the intensity of both attributes, but the cigar stayed in the medium range. If you regularly smoke the Davidoff White Label, you will probably feel the Oro Blanco has a little more in the way of intensity and boldness.

In terms of strength versus body, I found both attributes of the Davidoff Oro Blanco balanced each other nicely with neither attribute overshadowing the other.

Anytime you review a cigar that is quite pricy, there are two questions that have to be answered: 1) How good is it? 2) Is it worth the price?

In terms of how good the cigar is, this comes down to the merit rating – and it’s something we don’t factor price into the equation. Simply put, the Davidoff Oro Blanco is an amazing cigar that fires on all cylinders – flavor, complexity, and construction. In particular, the Oro Blanco excels in the flavor category. It is my opinion that this is the best Davidoff I ever smoked. However, there really isn’t any way I can say this cigar is worth paying $500 for. What I can say – this cigar makes the case for not only being the best Davidoff released, but an all-time great release overall. Once I was done smoking it, I wanted another – something that wasn’t going to happen. I will say, if you’re willing to spend $500 to splurge on a cigar, this is a good choice. It’s a cigar that any cigar enthusiast can enjoy.

Given this is a cigar at an epic level, it’s one worthy of seeking out. While I’m not saying go out and spend $5,000 on a box, what I can say is this cigar on its own earns the highest level – meaning if you have a chance to smoke this, and are willing to spend the money, you need to smoke it. Therefore it is worthy of our highest rating – The Oasis.

* Based on a single smoking experience