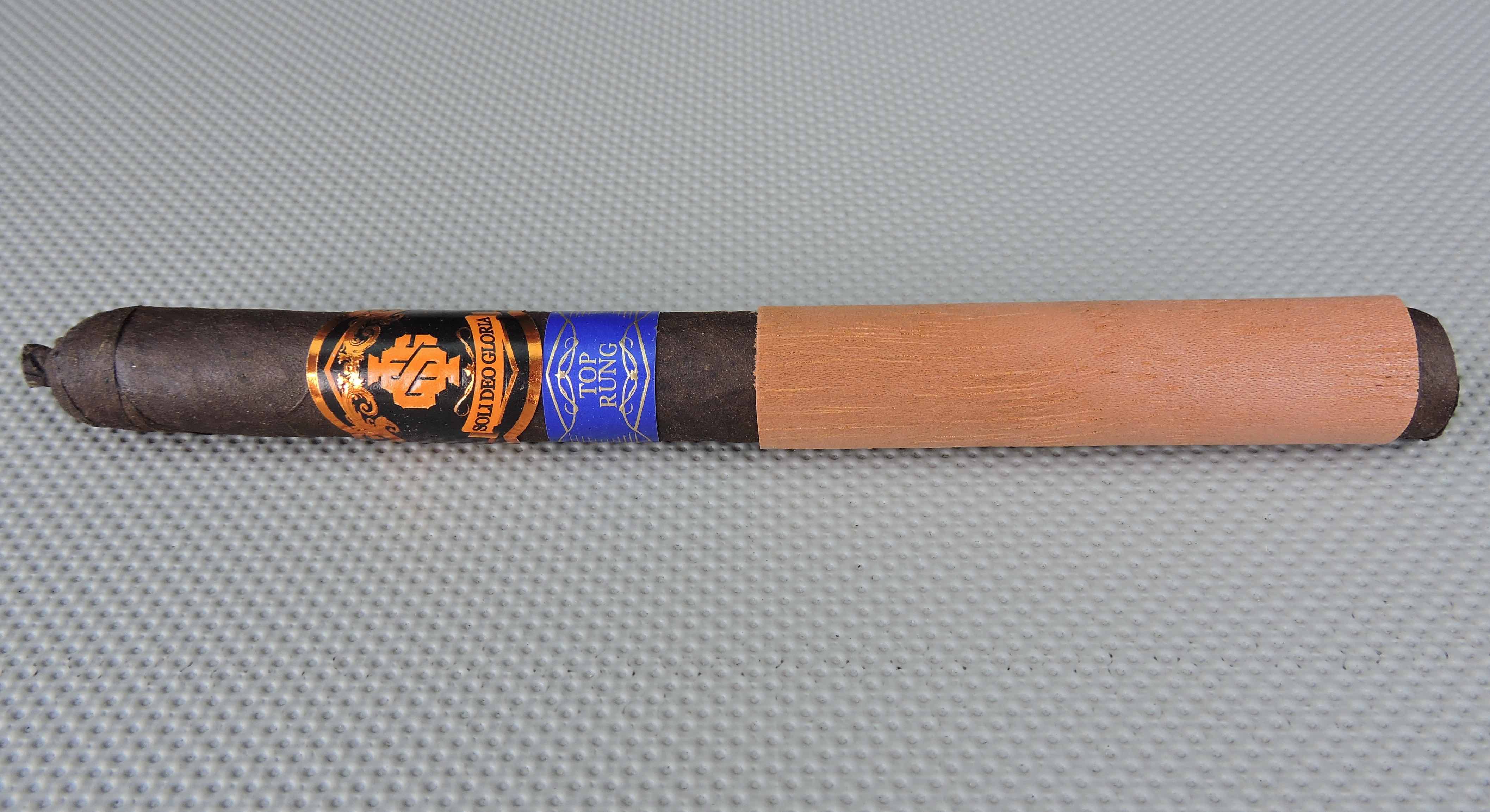 Earlier this year, Southern Draw Cigars launched a project called IGNITE. The project was launched as a collaboration between Southern Draw Cigars and some of its key retail partners. The IGNITE releases would feature some new offerings packaged in collectible jars. Each release has a charitable donation component, where a portion of the sales is donated to charity. The first release would be the IGNITE Top Rung which would feature a box-pressed lancero marca of the Southern Draw Jacobs Ladder blend. The charity selected was Cigars for Warriors, a program designed to send cigars to troops deployed overseas. The funds raised help offset the costs involved with collecting and transporting the cigars. The box-pressed lancero was the fourth vitola to be released in the Jacobs Ladder line.

At the time of this assessment there have been four releases in the IGNITE series:

The IGNITE Top Rung made its debut at the 2018 Texas Cigar Festival, and immediately after the trade show as made available to Casa de Montecristo retailers. Since then, there have been some limited shipments that have been made to select retailers. A total of 5,000 jars each containing ten cigars were produced. The jars are divided evenly between white and black color options. The cigars are all identical except for the packaging options. 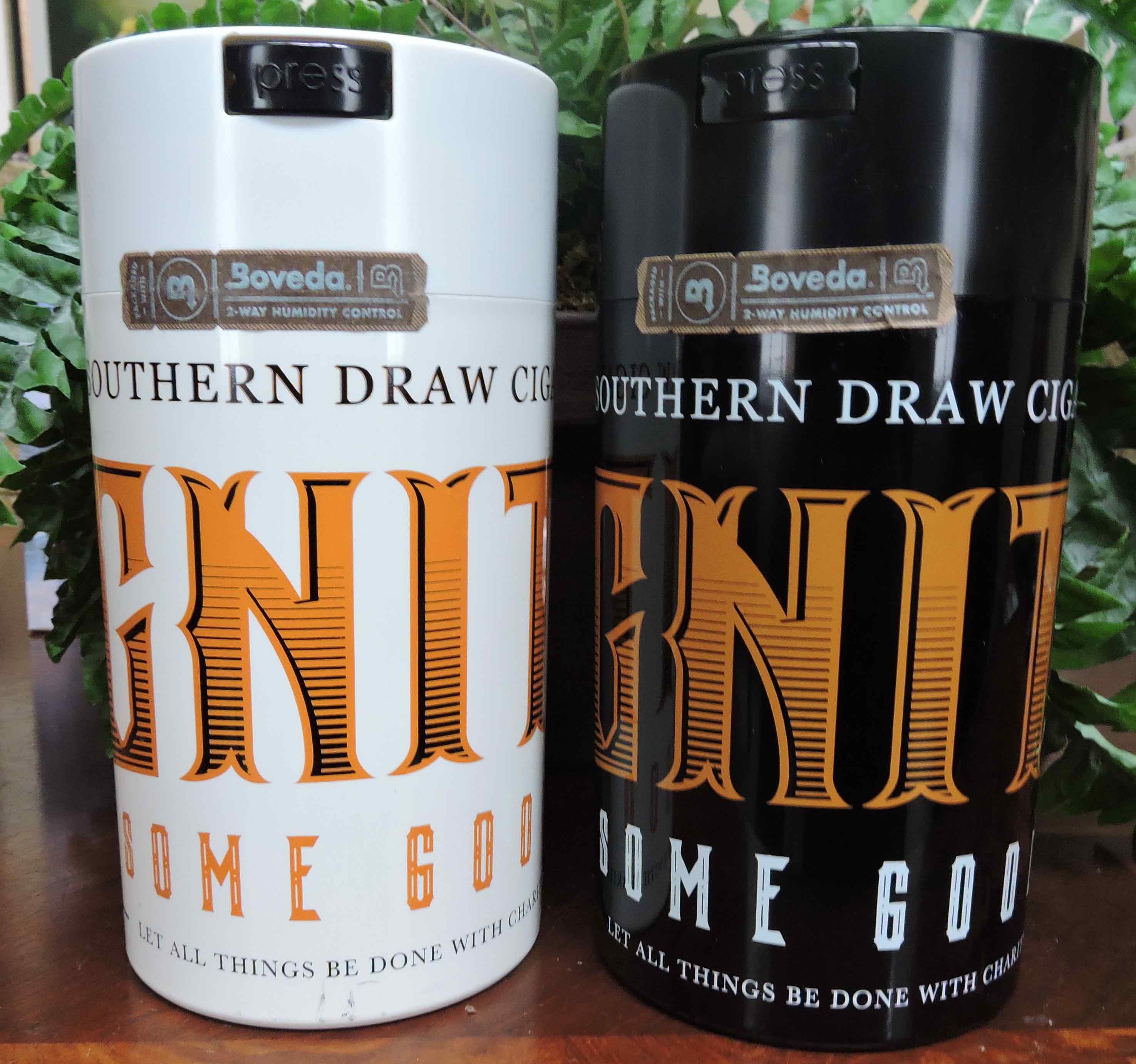 Without further ado, let’s break down the IGNITE Top Rung and see what this cigar brings to the table.

Jacobs Ladder is highlighted by a dark Pennsylvania Broadleaf wrapper, The blend also utilizes an Ecuadorian Maduro wrapper and an all-Nicaraguan filler highlighted by proprietary tobaccos. As with all Southern Draw Cigars, they are produced out of AJ Fernandez’s Tabacalera Fernandez factory in Estelí, Nicaragua.

The IGNITE Top Rung is different than the other three sizes of Jacobs Ladder in that it comes in ten-count jars. The remaining three sizes come in 20-count boxes. In addition, the Toro was made available for a limited run of 2-count pecata cases.

The cigars inside the jars also contain banding that matches the jar. Each jar ships the cigars packaged in a ten-count bundle. There is also a Boveda 2-way humidification packet inside the jar. 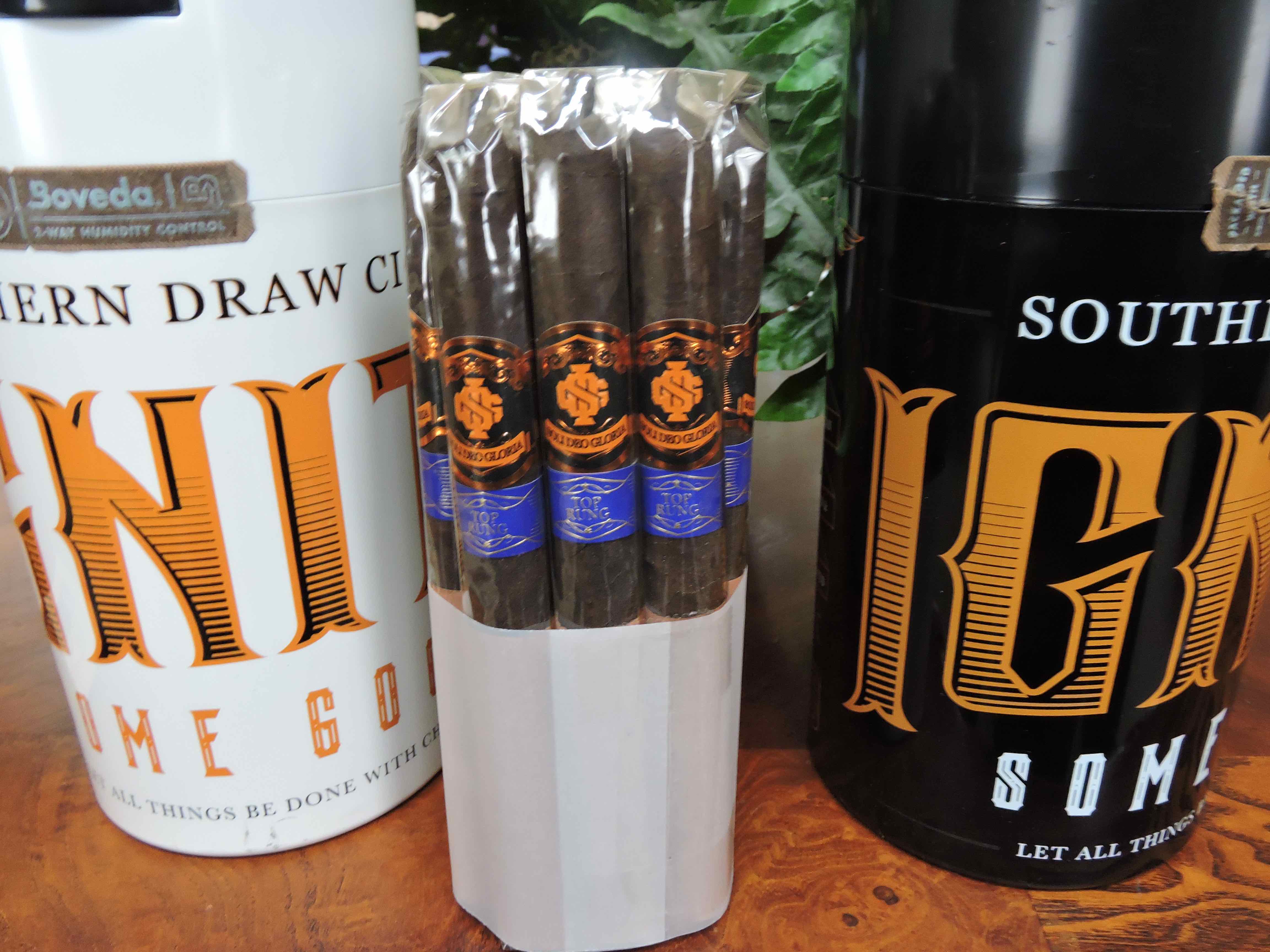 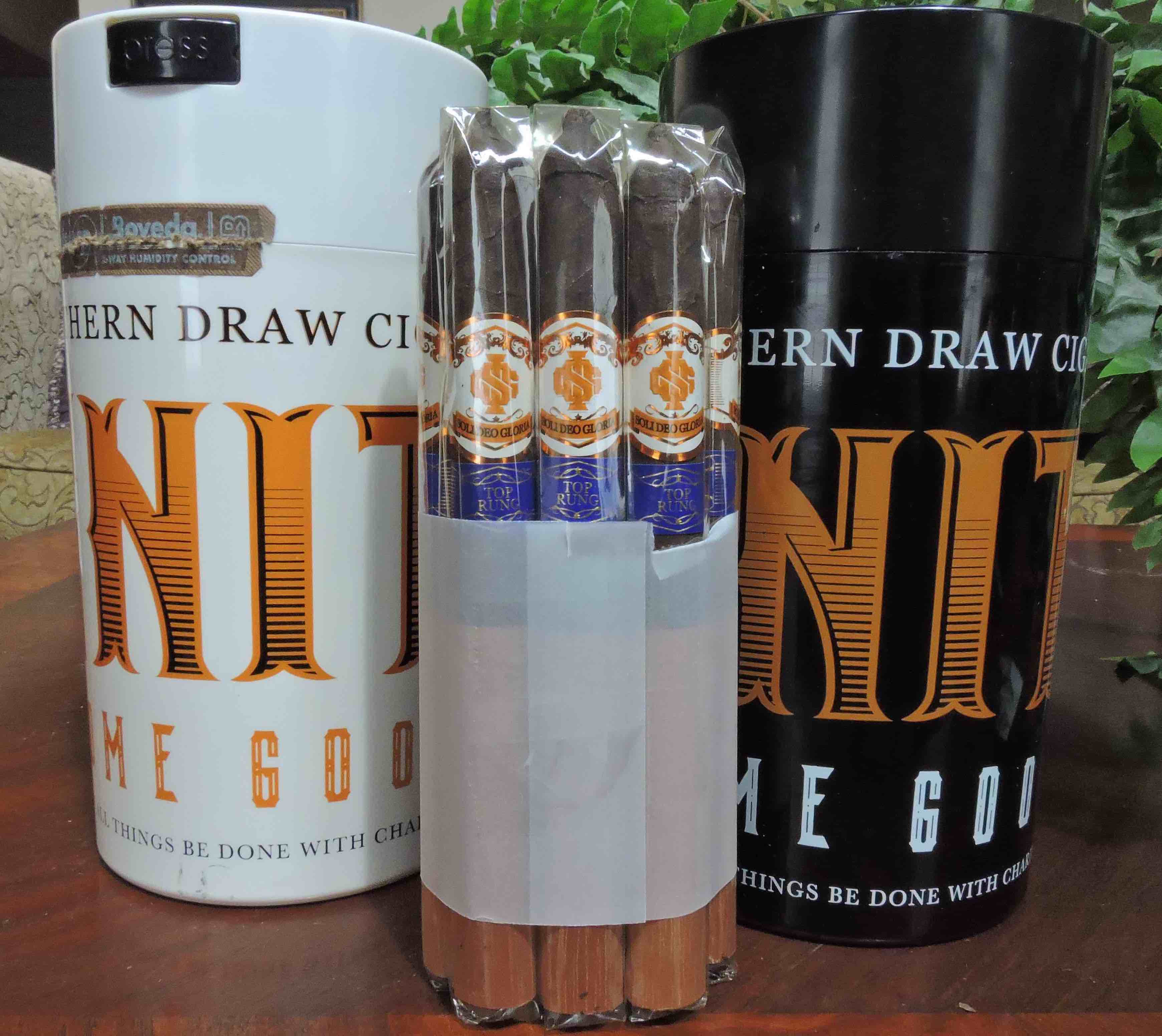 The top of each jar of the IGNITE Top Rung has a Cigars for Warriors decal. 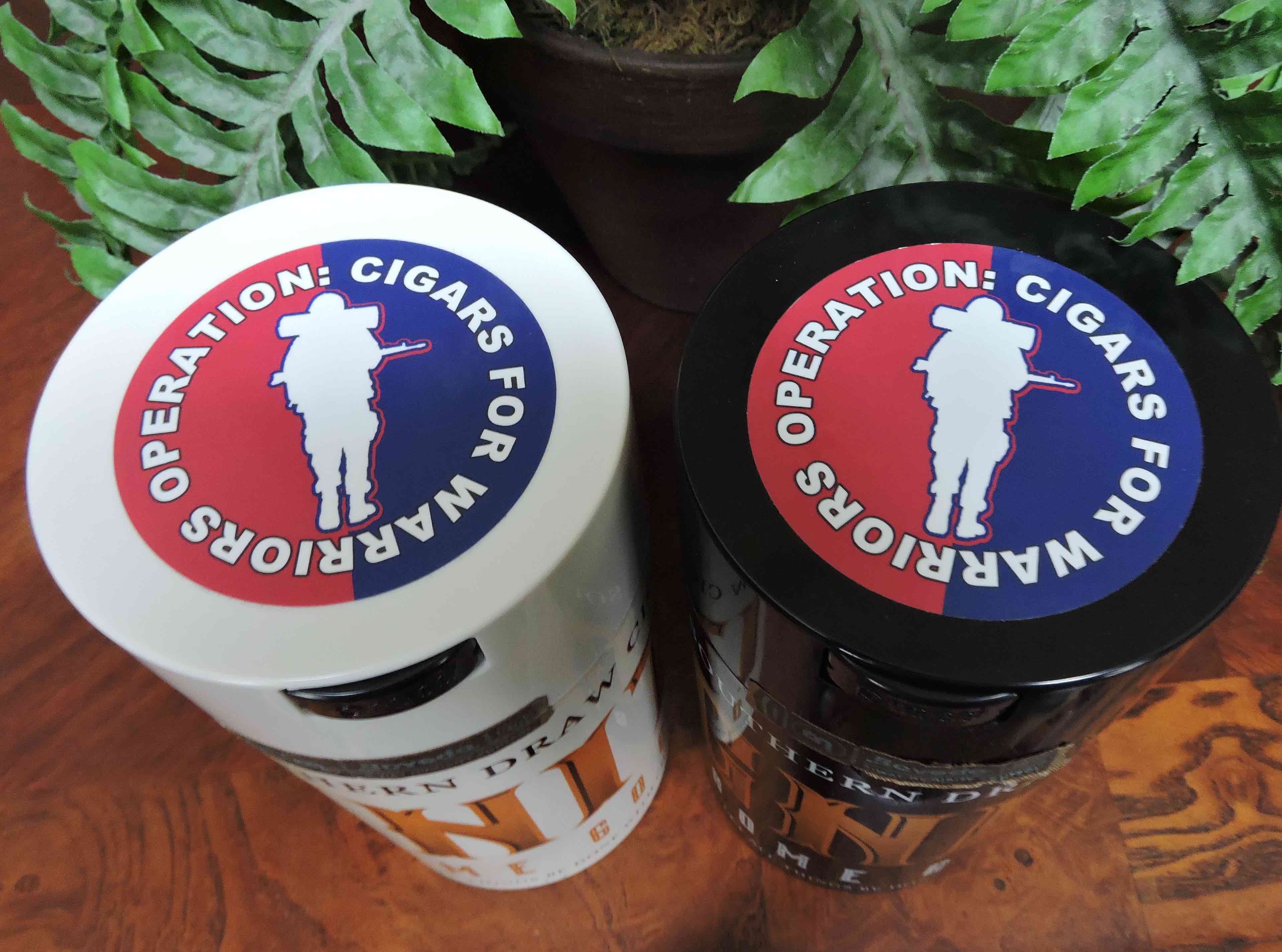 There is also a secondary band located just below the primary band that has a purple background. This features the text “TOP RUNG” in gold font. There are also gold adornments surrounding the text. The Top Rung is unique compared to the other IGNITE releases in that it has a different name. (The other releases use the standard line name – i.e. Rose of Sharon, Firethorn, and Kudzu on the secondary band).

There is also a cedar sleeve covering about half of the length of the cigar. The cedar sleeve is not only common to both the black and white banded editions, but across the whole line. 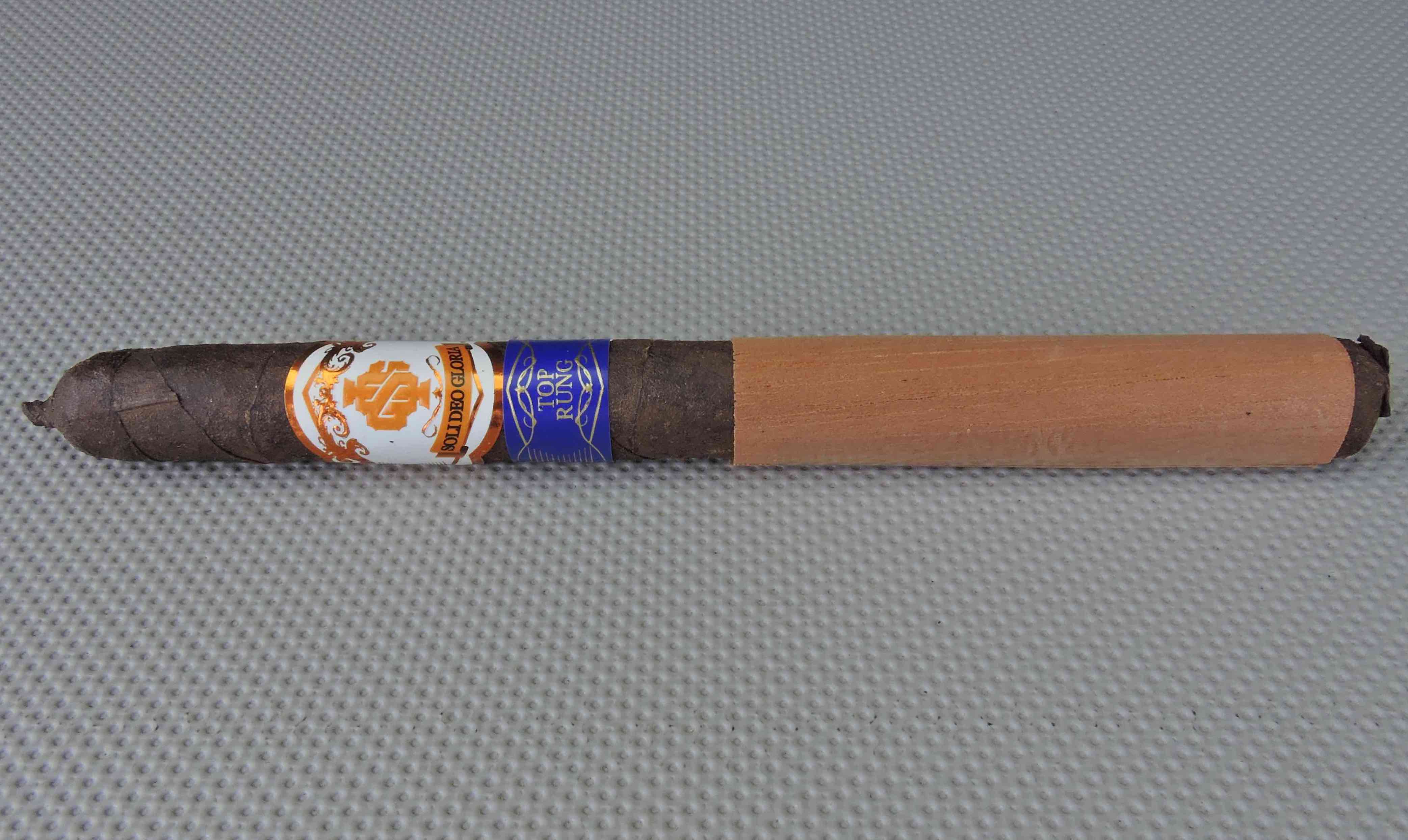 The Pennsylvania Broadleaf wrapper of the IGNITE had a dark chocolate color to it. There was a slight amount of mottling on the surface of the wrapper. At the same time, there wasn’t much in the way of oil on the surface. The darker color of the wrapper did a good job of minimizing the number of visible wrapper seams. There was a slight amount of visible veins. The cigar has a covered footer and is finished with a pig-tail cap. 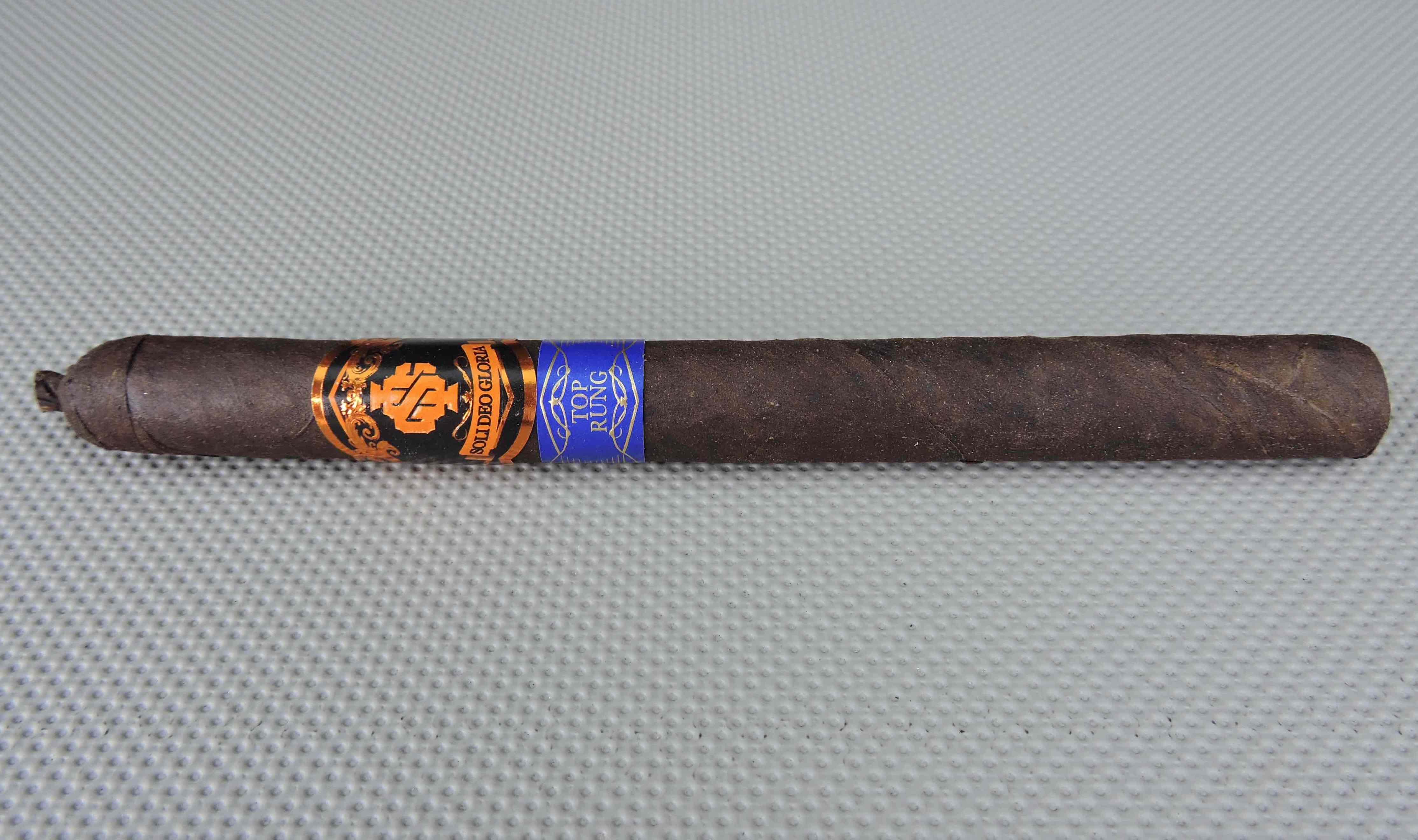 As mentioned above, the IGNITE Top Rung is a box-pressed lancero. This cigar has a very subtle Cuban press. In fact at first glance, it might look like a parejo, but once you set the cigar on a surface, you will definitely see it’s pressed.

After removing the cedar sleeve, the first step was to cut and test the dry draw. As opposed to pulling off the pig-tail cap, I used a straight cut to remove the cap of the IGNITE Top Rung. It was then on to the pre-light draw ritual. The dry draw delivered notes of mocha, wood, and cream. At this point, I was ready to light up the IGNITE Top Rung and await what the smoking experience would have in store.

Going through the second third, there was an increase in the cedar. At times the cedar showed some classic woody flavors. By the midway point, the cocoa and dried fruit receded from the forefront and were replaced by an earthy note. The later stage of the second third saw the earthy notes primary, the cocoa, dried fruit, and cedar notes close secondary notes while the pepper and mineral notes a little further behind. The cream notes dissipated.

The last third of the IGNITE Top Rung saw the cocoa and dried fruit make a slight comeback moving close to the forefront where the the earth notes remained grounded. The cedar, pepper, and mineral notes still remained in the background. This is the way the IGNITE Top Rung came to a close. The resulting nub was cool in temperature and slightly soft to the touch.

The IGNITE Top Rung performed excellent when I came to bur. This is a cigar that had a relatively straight burn line and had no problem maintaining a straight burn path. The amount of touch-ups this cigar needed was minimal. The cigar produced a relatively firm ash that had a very light gray color to it. Meanwhile the burn rate and burn temperature were both ideal. 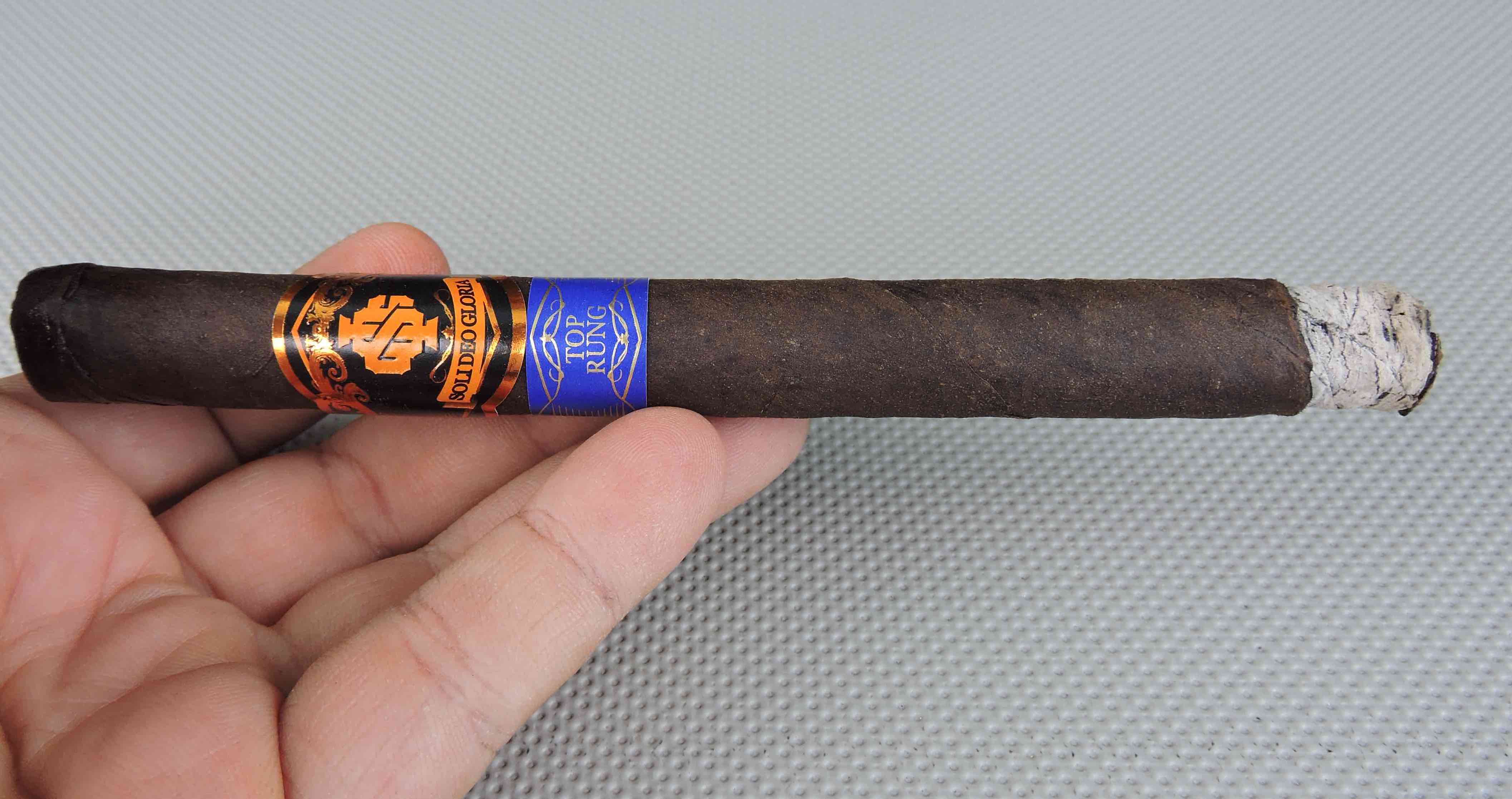 The IGNITE Top Rung not only looked like a parejo, but while I was puffing on it, it had the feel of a parejo. The cigar had a nice balance of openness and resistance to it. In the end, this was a cigar that was easy to derive flavor from.

No doubt when it comes to the boldest cigar in the Southern Draw portfolio, that honor belongs to the Jacobs Ladder blend. When it came to the IGNITE Top Rung, I did find this blend to be a little more dialed back in terms of strength and body compares to the other Jacobs Ladder sizes.

One comment on the canisters – they work great. They have a nice vacuum seal to it, and when using a boveda humidification pack, they are reusable. As for the cigar, I wasn’t sure how the Jacobs Ladder would perform in a 40 ring gauge format, but the blend came through with flying colors. While it is slightly dialed back in strength and body from the Robusto format, I still found the nuances the blend has to offer shined nicely. Even though there was a little more in the way of complexity with the lancero, I still found the richness of the flavors of the Robusto to have a slight edge. Nonetheless, this was still an excellent offering by Southern Draw Cigars. It’s a cigar for the experienced cigar enthusiast who wants a bold smoke. As for myself, it’s a cigar I would purchase again and it’s one that easily merits box worthy consideration.