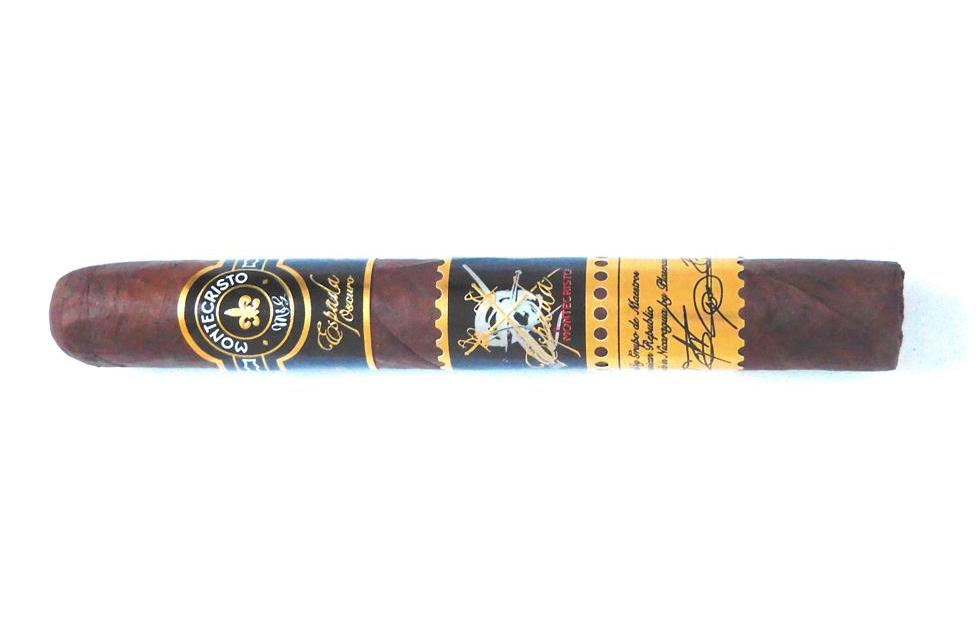 Without further ado, let’s turn our attention to the Montecristo Espada Oscuro Guard and see what this cigar brings to the table.

As mentioned, the Montecristo Espada Oscuro is a Nicaraguan puro featuring an Oscuro wrapper. It is produced at the Plasencia factory in Nicaragua

The Montecristo Espada Oscuro is available in three sizes. Each size is presented in 10-count boxes 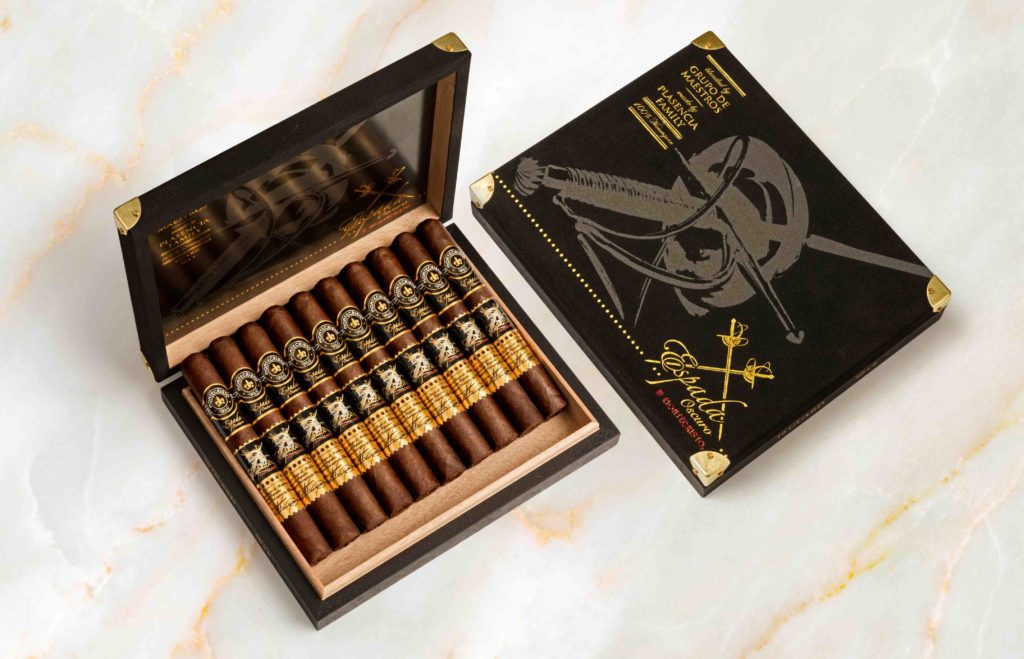 The Nicaraguan Habano Rosado Oscuro wrapper had a classic roasted coffee bean color with a slight rosado tint. As opposed to an oily surface, I would classify this wrapper as having a silky complexion. The wrapper had some visible veins and any wrapper seams that were visible were on the thin side.

There are three bands on the Espada. The primary band is a variation of the standard Montecristo band featuring a black background and the signature fleur-de-lis in gold.  The black background has a glossy look to it. A gold circle surrounds the fleur-de-lis. The text “MONTECRISTO” is in white font above the white circle. There is gold trim on the outer edge of the band – which also has a circular effect around the front of the band.  There are four pinstripes moving outward to the left and right with the middle pinstripes having a “wave” like effect (the inner ones are white, the outer ones are gold).  The band has a simulated “extension” on the lower portion of the band – which almost looks like a secondary band.  This “extension” also has a glossy black color.  On the extension is the text “ESPADA”  and “OSCURO” in gold cursive font. To the left and right is the text “MONTECRISTO” in red font.

The second and third bands start around the halfway point and go two-thirds of the way to the footer. The band has the appearance of two attached adhesive stamps (in fact there is some light adhesion on the back – although it is not attached to the wrapper). The top stamp is black in color. Sitting on the background are two gold crossed swords over a silver knight’s head. Below the swords are the text “Espada” in gold cursive font with “MONTECRISTO in red font. The bottom stamp has a certificate-like look signed by Grupos de Maestros.

After removing the two secondary bands from the Montecristo Espada Oscuro Guard, a straight cut was used to remove the cap. Once the cap was removed, it was on to the pre-light draw experience. The cold draw delivered a mix of chocolate, citrus, and cedar. This was a satisfactory pre-light draw experience. At this point, it was time to toast up the footer of the Montecristo Espada Oscuro Guard and see what the smoking phase would have in store.

At the start of the smoking experience for the Montecristo Espada Oscuro Guard, the chocolate, citrus, and cedar notes picked up right where the pre-light draw left off. The chocolate notes moved to the forefront quickly and were joined at the hip with a malty note. Meanwhile, the citrus and cedar moved into the background and were joined by notes of baker’s spice. As the Espada Oscuro Guard moved through the first third, the citrus notes floated between the forefront and background. Meanwhile there was a layer of red pepper on the retro-hale.

During the second third of the Montecristo Espada Oscuro Guard, a combination of earth and natural tobacco displaced the chocolate at the final third. By this stage, the malt quality to the chocolate had dissipated The chocolate receded into the background joining the citrus, baker’s spice, and cedar. During this stage, there was an additional layer of mixed pepper that emerged on the tongue.

There was not much change going into the final third. The earth and natural tobacco remained primary. The pepper notes were more prominent, but were not close to overtaking the flavor profile. Meanwhile notes of citrus, baker’s spice, cedar, and chocolate rounded things out. This is the way the Montecristo Espada Oscuro Guard came to a close. The resulting nub was firm to the touch and cool in temperature.

There was some unevenness on the burn line that did require some touch-ups to keep the burn path straight. While the touch-ups did the trick of keeping the burn on track, there were slightly more touch-ups than I normally prefer. The resulting ash had a silver gray color. This was an ash that was on the firm side. The burn rate and burn temperature were both ideal. 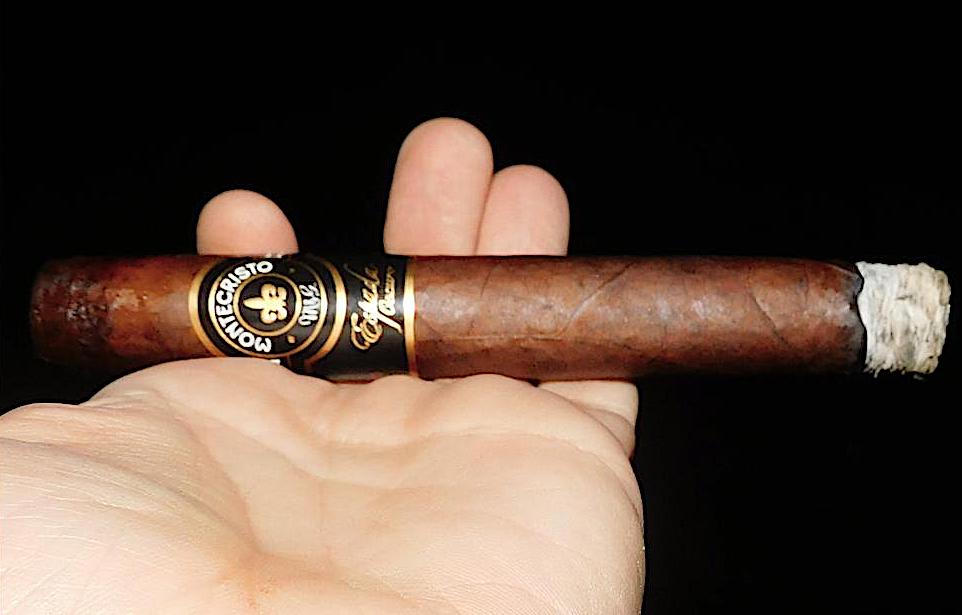 In terms of the draw of the Montecristo Espada Oscuro Guard, it had a touch of resistance – which is something that I have said many times on assessments I have written is a positive. This was a cigar that also produced abundant layers of smoke.

The Montecristo Espada Oscuro Guard delivered a medium strength, medium-bodied smoking experience from start to finish. There wasn’t much variance in the intensity levels of either attribute. In terms of strength versus body, both attributes balanced each other nicely with neither attribute overshadowing the other.

Since the original Montecristo Espada was released in 2014, I have been quite impressed with the Nicaraguan versions of the Montecristo brand. The Montecristo Espada Oscuro Guard adds to an impressive track record of the Montecristo coming out of Nicaragua. It’s a cigar that excels in the most important category – flavor. While not very high in flavor transitions, there were plenty of flavor nuances with each puff of the cigar taken. In the end, while not inexpensive, this is still an approachable cigar – one that I can recommend to any cigar enthusiast. As for myself, this is a cigar I would buy and smoke again. At 90 points, it reaches the Cigar Coop Standard of Excellence.