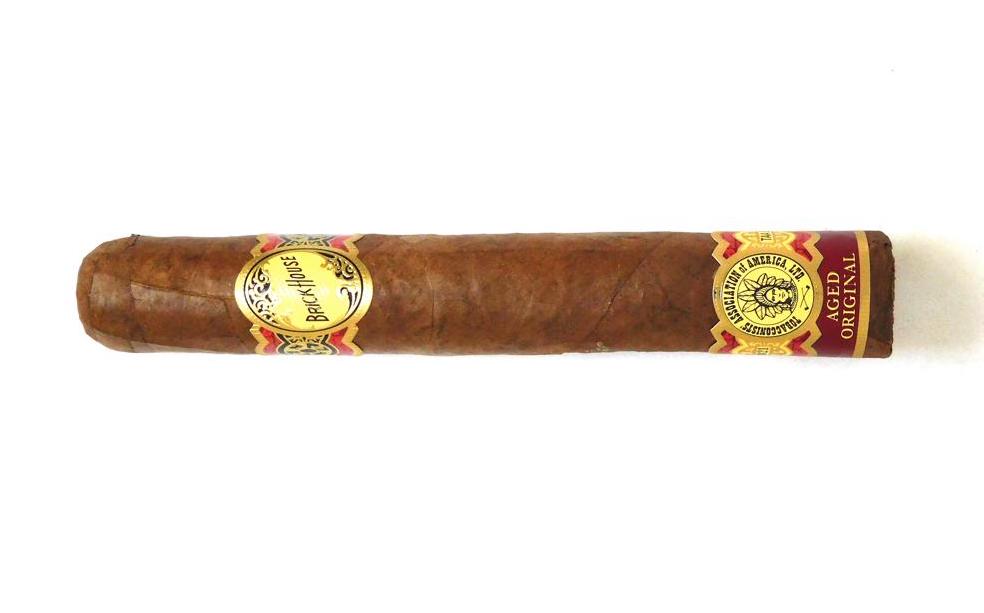 TAA Exclusive Series consists of cigars made by leading manufacturers that are exclusively sold at TAA member retailers. The TAA is a small group of retailers. At press time the number of retailers is approximately 80. The TAA describes as: 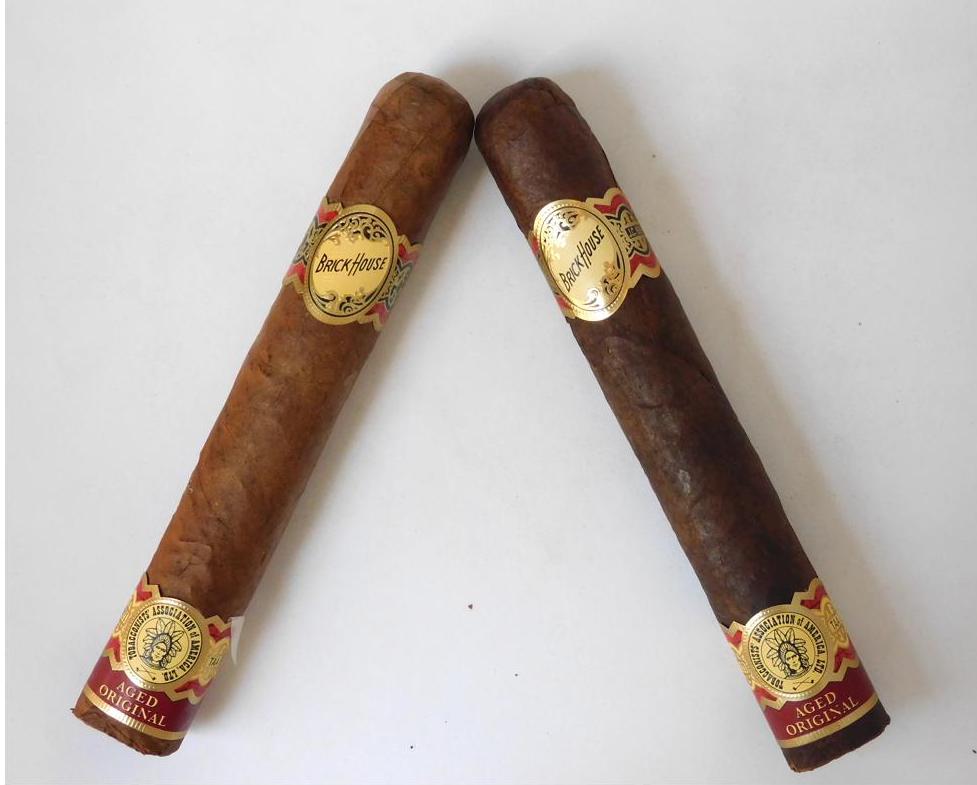 Without further ado, let’s break down the J.C. Newman Brick House Beginnings Natural and see what this brings to the table.

The Brick House Beginnings Natural is highlighted by an Ecuadorian Havana Wrapper over a blend of Nicaraguan tobaccos. The cigar is produced out of J.C. Newman’s PENSA factory in Estelí, Nicaragua.

The Ecuadorian Havana wrapper of the Brick House Beginnings Mighty Mighty Natural had a medium brown color with a Colorado red hue to it. There was a slight amount of oil on the surface of the wrapper. There were some visible veins and visible wrapper seams. There are two bands on the Brick House Beginnings Natural. The primary band is the same one found on the core Brick House and Brick House Maduro lines. It consists of a pale yellow, gold, black, and red color scheme. The center of the band has an oval field with gold trim along with some gold and black adornments. On the center of the band is the text “BRICK HOUSE” arranged diagonally from the lower left to the upper right. The left and right side of the band has gold, black, and red adornments.

A straight cut was used to commence the smoking experience of the Brick House Beginnings Mighty Mighty Natural. Once the cap was removed, the pre-light draw ritual began. The cold draw delivered earth, wood, and black pepper. Overall this was a mundane pre-light draw that really didn’t do much to excite me. Since the pre-light draw is not factored into the score or value rating, there was no loss of points here. At this point, it was time to remove the footer band of the Brick House Beginnings Mighty Mighty Natural, toast up the cigar and see what the smoking experience would have in store.

Right out of the gate, the Brick House Beginnings Mighty Mighty Natural started out with notes of natural tobacco and earth. In the background were notes of dried fruit, wood, and red pepper. As the cigar progressed through the first third, the earth notes took over as the primary notes. In the background, there were slight undertones of caramel and baker’s spice that were present with the other background flavors. The retro-hale delivered a light cedar note.

During the second third, the Brick House Beginnings Mighty Mighty Natural saw the earth notes morph to more of a bread note. The natural tobacco, fruit, wood, and red pepper notes remained in the background. During this time, the retro-hale transitioned to have more in the way of an additional layer of red pepper. The caramel and baking spice undertones that were present dissipated.

The final third didn’t see much change. The bread/earth notes remained primary. The pepper was now a close secondary note and the natural tobacco, fruit, and wood rounded things out. This is the way the Brick House Beginnings Mighty Mighty Natural came to a close. The resulting nub was soft to the touch and cool in temperature.

In terms of the burn, there were frequent touch-ups required to keep the burn on a straight path and the burn line relatively straight. While the touch-ups did the trick, more were required than I prefer. The resulting ash wasn’t overly firm, but it wasn’t loose or flakey. This was an ash that had a silver-gray color to it. As for the burn rate and burn temperature, both were ideal. 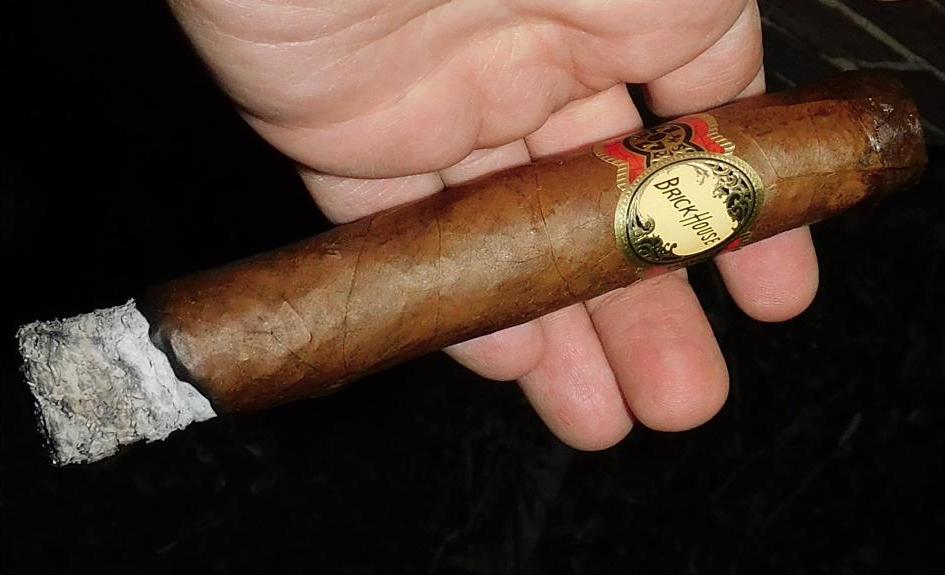 Overall the draw of the Brick House Beginnings Mighty Mighty Natural performed quite well. There was a touch of resistance, which is something that I like. At the same time, there were no issues puffing on this 60-ring gauge cigar and it was a low-maintenance cigar to derive flavor from.

The Brick House Beginnings Mighty Mighty Natural delivered a medium strength, medium-bodied smoking experience from start to finish. There wasn’t much in the way of variance of the intensity levels of the strength and body. At the same time, the strength and body balanced each other nicely with neither attribute overshadowing the other.

This is the second of the two TAA “Beginnings” cigars released by J.C. Newman that I have smoked. While both the Maduro and the Natural scored a respectable 88 points each, the relative experience compared to the regular production versions was different. With the Maduro, I actually found the Beginnings version of the Mighty Mighty to not deliver as solid a smoking experience as the regular production. With the Natural, I found the Beginnings version of the Mighty Mighty Natural to deliver a better version than the regular production one. The aging seemed to do well and a lot of the nuances were allowed to stand out on the Natural. I would say this was a huge difference, except the Brick House Beginnings Natural Mighty Mighty still performed better. Given the Beginnings is going to cost $2.00 more, that difference is not great enough to warrant me spending the extra dollars. I recommend trying a sample and seeing what you think.

As for the 2021 TAA Exclusive Series, this is just another average installment for what as a whole is a series that is supposed to represent the best of the best of the cigar industry.