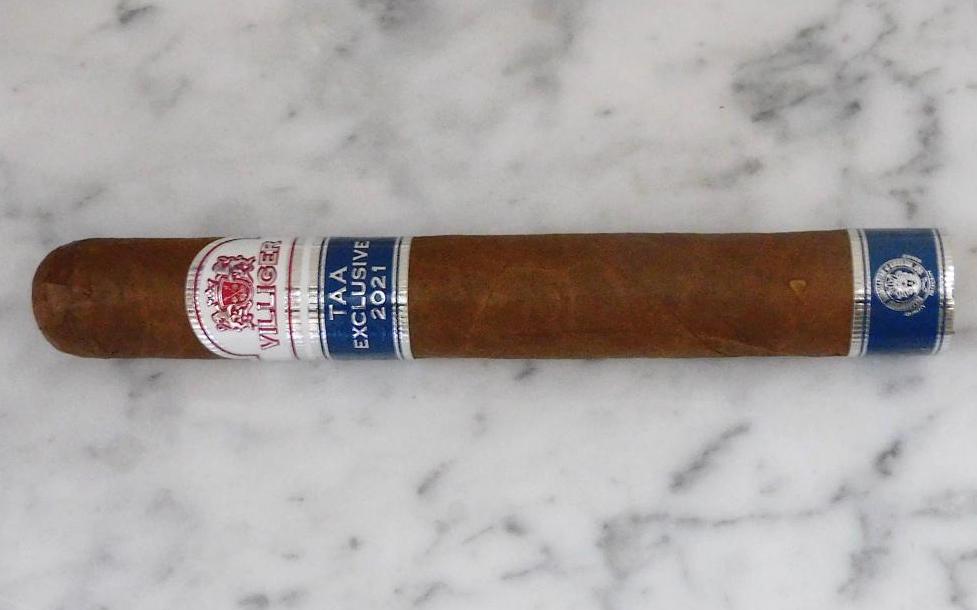 In 2021, Villiger Cigars would introduce its second cigar that would be a part of the 2021 Tobacconists Association of America (TAA) Exclusive Series. Since Rene Castenada became the President of Villiger Cigars North America, he has paid particular attention to the handmade business of Villiger, using multiple factories (including Villiger’s own) to produce the cigars. For the Villiger TAA Exclusive 2021, Castenada would turn to a factory Villiger has worked with before – Jochy Blanco’s Tabacalera La Palma. Today we take a closer look at the Villiger TAA Exclusive 2021. 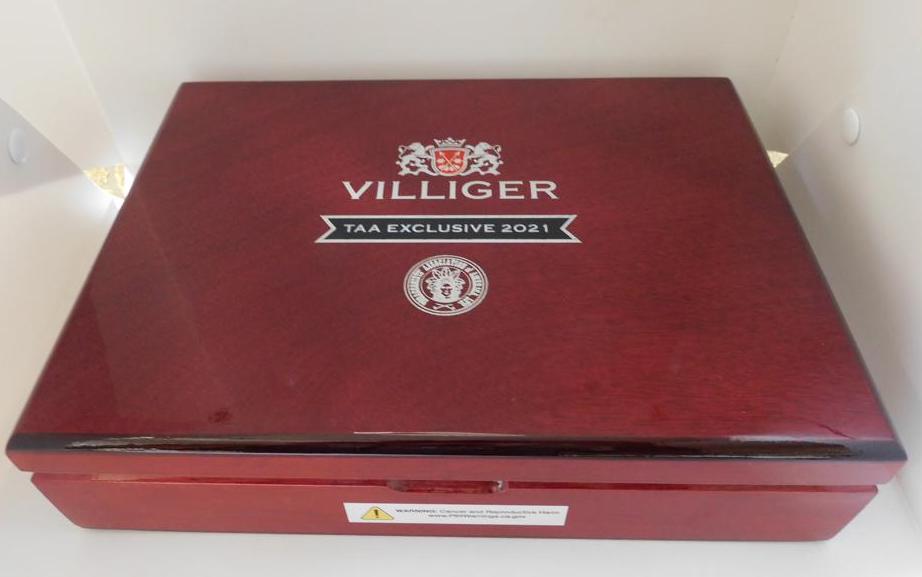 Packaging of the Villiger TAA Exclusive 2021

TAA Exclusive Series consists of cigars made by leading manufacturers that are exclusively sold at TAA member retailers. The TAA is a small group of retailers. At press time the number of retailers is approximately 80. The TAA describes as:

The following have been Villiger Cigars TAA Exclusive Cigar Offerings.  In parentheses is the factory that produced each.

Without further ado, let’s break down the Villiger TAA Exclusive 2021 and see what this brings to the table.

The Villiger TAA Exclusive 2021 comes in one size – a 6 x 54 Toro. The cigars were presented in 20-count boxes with a total production of 350 boxes. 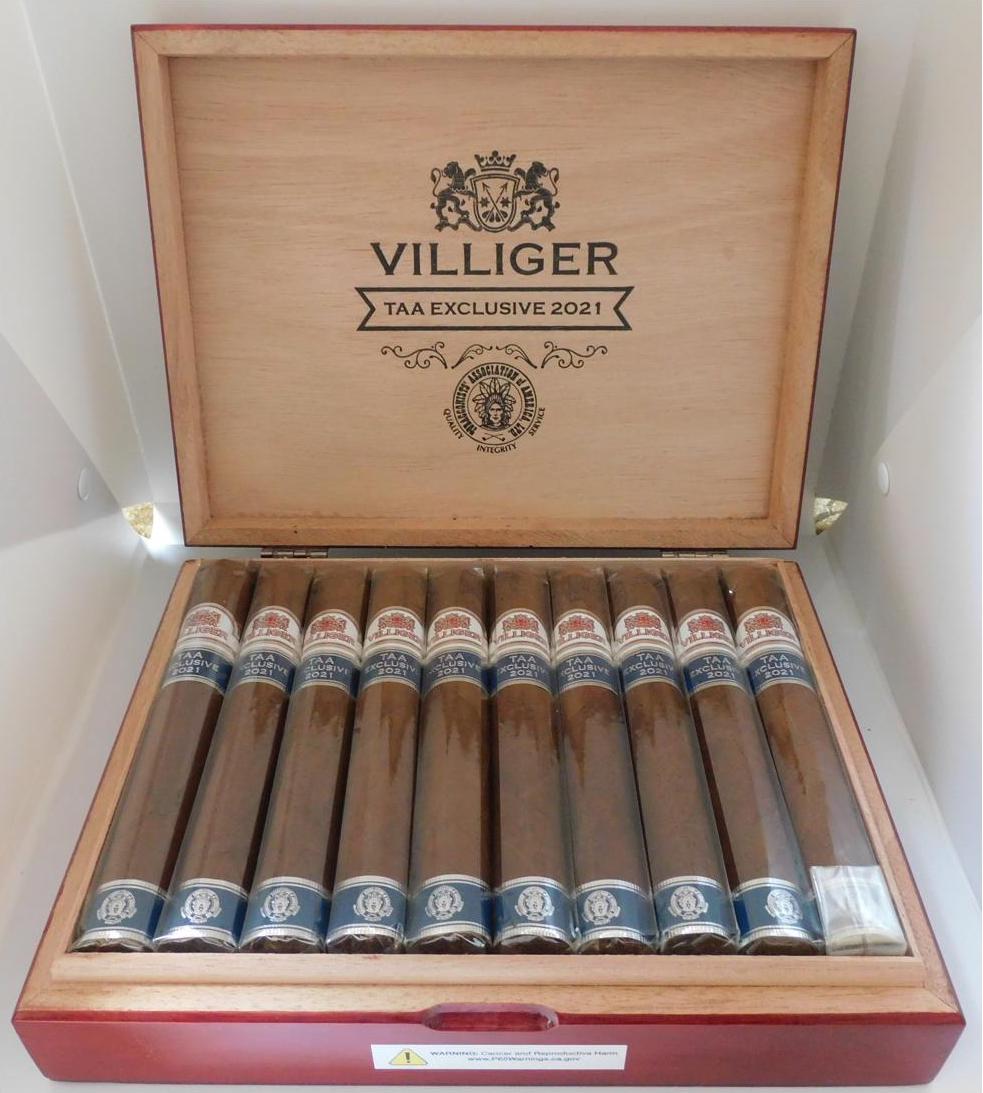 The Ecuadorian Habano wrapper of the Villager TAA Exclusive 2021 had a cinnamon color to it. The surface of the wrapper did not have much in the way of oils. There were both visible veins and visible seams. 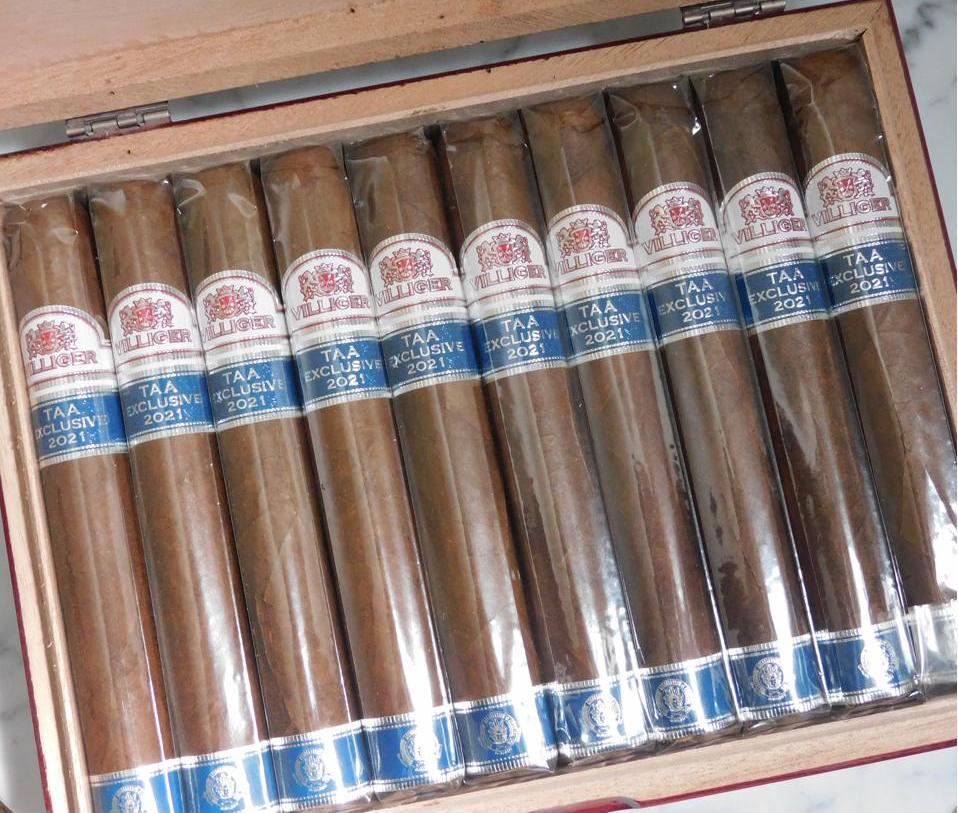 Close Up of the Villiger TAA Exclusive 2021

There are two bands on the Villiger TAA Exclusive 2021. The upper part of the primary band is a semicircle with a white background surrounded by silver red trim. Sitting on that semicircle is a red and silver Villiger coat of arms – and just below that is the text “VILLIGER” in silver-red font. The lower portion of the band has a blue background. Sitting on that portion of the band is the text “TAA EXCLUSIVE 2021” in silver font. The upper and lower portions of the band are separated by silver, red, and white stripes.

The secondary band is blue with silver trim and silver font. Prominently on the center of the band is the TAA logo.

A straight cut was used to commence the cigar experience of the Villiger TAA Exclusive 2021. Once the cap was removed, it was on to the pre-light draw ritual. The cold draw delivered notes of cedar, natural tobacco, and a touch of fruit. Overall this wasn’t a bad pre-light draw, but it wasn’t the most exciting one either. Since the pre-light draw is not factored into the numeric score or value rating, there was no loss of points here. At this point, it was time to remove the footer band of the Villiger TAA Exclusive 2021, toast up the footer and move into the smoking phase.

Out of the gate, the Villiger TAA Exclusive 2021 delivered notes of natural tobacco. This was complemented in the background by notes of earth, baker’s spice, black pepper, and earth. As the cigar progressed through the first third the earth notes joined the natural tobacco as a primary note. Meanwhile, there was an additional layer of black pepper.

During the second third of the Villiger TAA Exclusive 2021, some cedar notes emerged in the background. Both the cedar and black pepper gradually increased in the second third. Just past the midway point, the earth notes pushed out the natural tobacco, becoming the sole primary note. The natural tobacco joined the cedar, pepper, and baker’s spice notes. It was also around this time the fruit notes developed into a citrus note with astringent qualities.

By the last third, the cedar notes joined the earth notes in the forefront. Instead of rounding out the flavor profile, the background notes were quite muddled. The astringent citrus and pepper notes were more prominent and overshadowed the natural tobacco and baker’s spice. This is the way the Villiger TAA Exclusive 2021 came to a close. The resulting nub was soft to the touch and cool in temperature.

The Villiger TAA Exclusive 2021 had a relatively straight burn line and relatively straight burn path. At the same time, this cigar did require frequent touch-ups to keep on a straight path. While the touch-ups did the trick, there were more touch-ups needed than I prefer. The resulting ash was light gray in color and skewed toward the firm side. As for the burn rate and burn temperature, both maintained ideal levels. 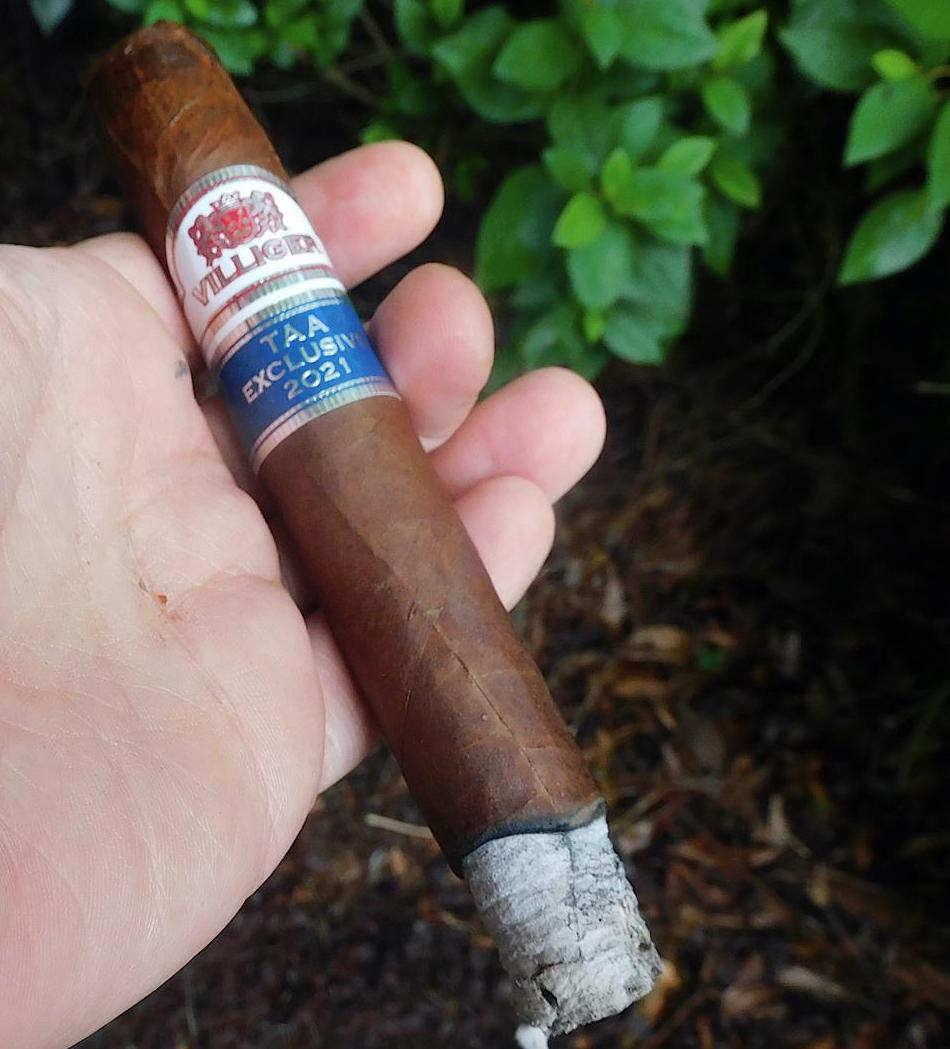 The draw to the Villiger TAA Exclusive 2021 was more open than I prefer, but it didn’t really affect the experience other than it did allow for ample smoke to be produced.

The strength and body of the Villiger TAA Exclusive 2021 started out in the medium range. There was a nominal increase in the intensity of both attributes throughout the experience. The body came very close to moving into “medium to full” territory.

I’ll be very direct. This is another miss of a TAA Exclusive cigar. The TAA Exclusive Series is positioned as an elite series of cigars, and in most cases, the cigars simply do not live up to that label. The Villiger TAA Exclusive 2021 had a good first third but broke down in the final 2/3 in the category that matters the most – flavor.  It was the first third that got this cigar up to an 86. Villiger, Tabacalera Palma, and the TAA are capable of doing better. Not much more I can add here, this one was a miss for me and not one I could recommend.