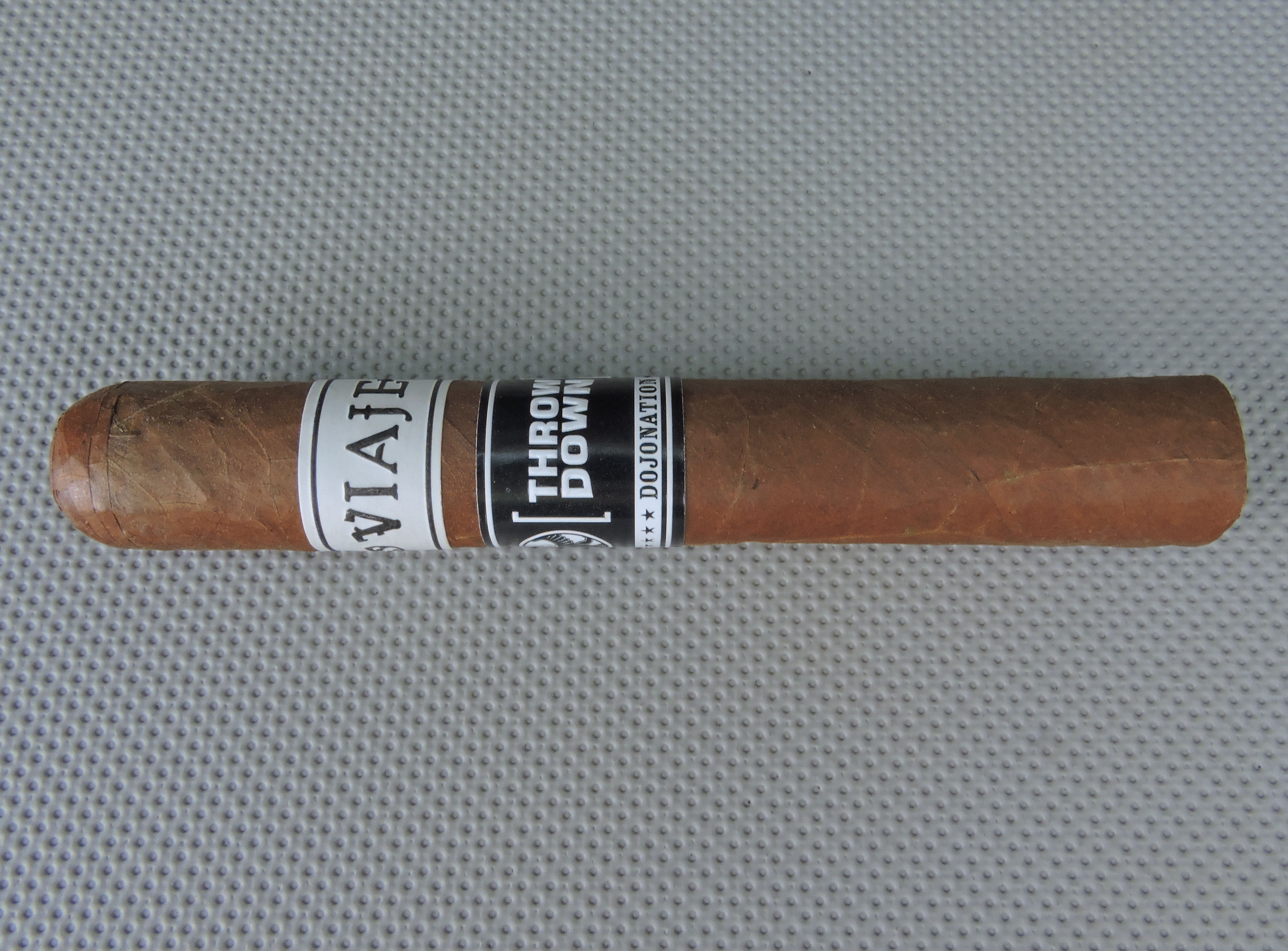 The Viaje Throw Down Dojonation is one of two cigars of the Viaje Throw Down set. The Viaje Throw Down is a collaboration between Viaje Cigars and two leading cigar media entities Cigar Fedaration and Cigar Dojo. Under this collaboration, Cigar Dojo owner Eric “Master Sensei” Guttormson and Cigar Federation owner Logan Lawler, each selected a blend from a group of “contender blends” that were provided by Viaje owner Andre Farkas. The concept was for each brand owner to select a blend that best represents his brand’s community. The cigars would then be produced and packaged together in ten count bundles containing 5 cigars of each of the blends and made available as a shop exclusive for the Cigar Federation Store. These cigars would become known as the “Viaje Throw Down – Dojonation” (Sensei’s blend) and “Viaje Throw Down Fed Head” (Lawler’s blend). As an added twist, consumers would then be able to “vote” for their favorite blend making this a collaboration a competition. Recently we assessed the Fed Head and today we turn our attention to the Dojonation. Overall we found the Dojonation to be an outstanding cigar. As for which cigar is our winner in the Throw Down, we will save that for the end.

Back when we assessed the Fed Head, we went through the connection of Cigar Dojo, Cigar Federation, and their history on collaborating on projects with manufacturers.

On a recent episode of Cigar Chat, Farkas, Lawler, and Master Sensei stated that this a one time limited release project.  A web site – www.throwdowncigar.com has been setup for consumers to make their final vote.

Without further ado, let’s take a look at the Viaje Throw Down Dojonation and see what this cigar bring to the table:

For completeness we list both blends. Most of the information on the tobaccos as well as what factory Viaje used for this cigar have not been disclosed. The blends do use two staple wrappers found across Viaje lines – Criollo ’98 (Dojonation) and San Andres Maduro (Fed Head).

The Criollo wrapper of the Viaje Throw Down Dojonation has a medium brown color. There is a light coating of oil on the wrapper. Despite the fact I found the surface of the Dojonation to be slightly bumpy, I still found the wrapper had well hidden wrapper seams and thin visible veins.

There are two bands on the Viaje Throw Down Dojonation. The primary band is the one found on the Viaje White Label Project (WLP) series – namely a white background with “Viaje” visible boldly in black font. There is a thin black pinstripe at the top and bottom of the band.

The second band has a black and white color scheme. Most of the band has a black background. At the center of band is the text “THROW” with the text “DOWN” below it – both in white font. There are two brackets that surround the text. To the left of the text is the Cigar Federation logo in white. To the right of the text is the Cigar Dojo logo in white. There is a white stripe toward the bottom of the band with the text “DOJONATION” in black font – surrounded by black stars.

Before smoking the Viaje Throw Down Dojonation, I went with a straight cut to remove the cap.  After removing the cap, I proceeded with the pre-light draw. The dry draw provided a nice mix of natural tobacco, cherry / marshmallow notes, and some generic wood (not cedar) notes. Overall I considered this to be an excellent pre-light draw experience. At this point, I was ready to light up the Dojonation and see what the cigar experience would have in store.

The Viaje Throw Down Dojonation started out with a short, moderate spurt of black pepper. The pepper quickly subsided to the background and gave way to notes of natural tobacco, fruit, and caramel sweetness. At the same time there were some generic wood notes present in the background. As for the retro-hale, it was a nice combination of black pepper and some of the fruit sweetness.

Throughout the first half of the Dojonation, I found the natural tobacco to be present in the forefront. The fruit and caramel notes alternated in intensity, and at times formed a nice fusion.

By the second half, the natural tobacco changed to an oak-like note. The fruit and caramel notes slightly diminished. On one sample these sweet notes were a little more prominent during the second half than the other sample. By the last third, the pepper spice moved to the forefront joining the oak. This is the way the cigar experience Dojonation came to a close. The resulting nub was soft to the touch, but cool in temperature.

When I assessed the Viaje Throw Down Fed Head, I talked a lot about the quality and consistency improvements around Viaje Cigar release. The Dojonation cigar held up to this improved quality. Overall I found the burn path of the Dojonation to remain straight. There was a slightly irregular burn line, but for the most part this was cosmetic and easily remedied with touch-ups. I didn’t find this cigar needed an abnormal amount of touch-ups. The resulting ash was charcoal gray. The ash was on the firmer side and came off the cigar in clean chunks. The burn rate and burn temperature were ideal. 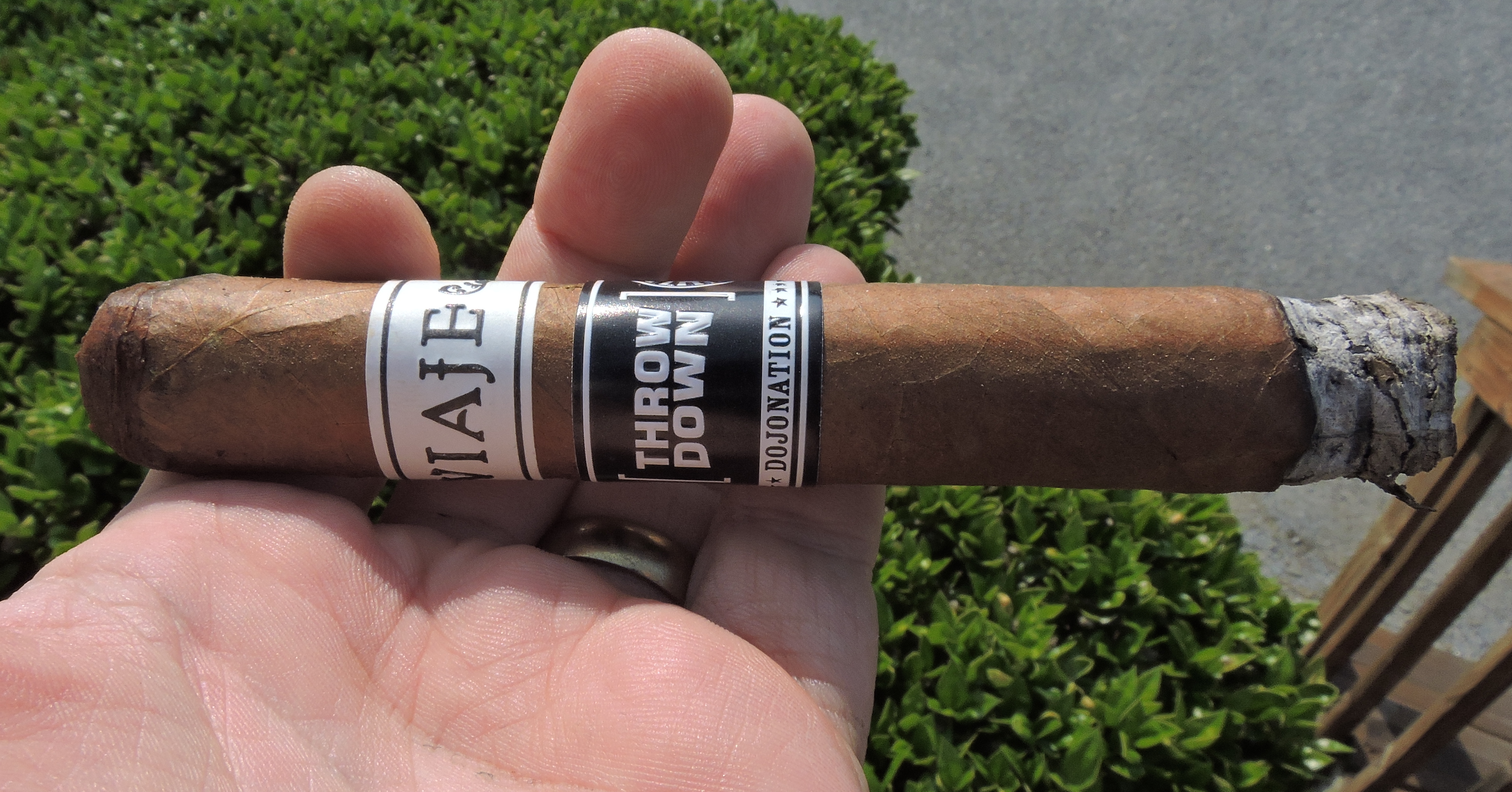 Burn of the Viaje Throw Down Dojonation

The draw performed very well.  I found it be more on the open side, but it was not a loose draw.  This was a low maintenance cigar to derive the flavors from.

In terms of Viaje’s Criollo wrapper releases, I have tended to gravitate to the darker colored criollo cigars (such as Super Shot and Holiday Blend) that have delivered more of a full strength cigar. I categorize the Viaje Throw Down Dojonation as being a lighter colored criollo that does not deliver a full strength cigar. With the Dojonation, I found this to be a very good cigar. It was flavorful with excellent construction. This is a cigar I would recommend to an experienced cigar enthusiast, but it’s also a nice cigar for the novice looking for something a little fuller. As for myself, this is a cigar I would smoke again. Considering the Dojonation cigar on its own, this is easily worth a box / bundle split.

Of course, given the nature of what Viaje Throw Down is, ultimately a winner needs to be selected. Both cigars are excellent and are worthy of purchasing and smoking. While I found Dojonation to offer a little more in complexity, I still found the Fed Head to deliver better flavors. In boxing terms, it’s the Fed Head by a close, but unanimous decision. However, a rematch certainly is in order.