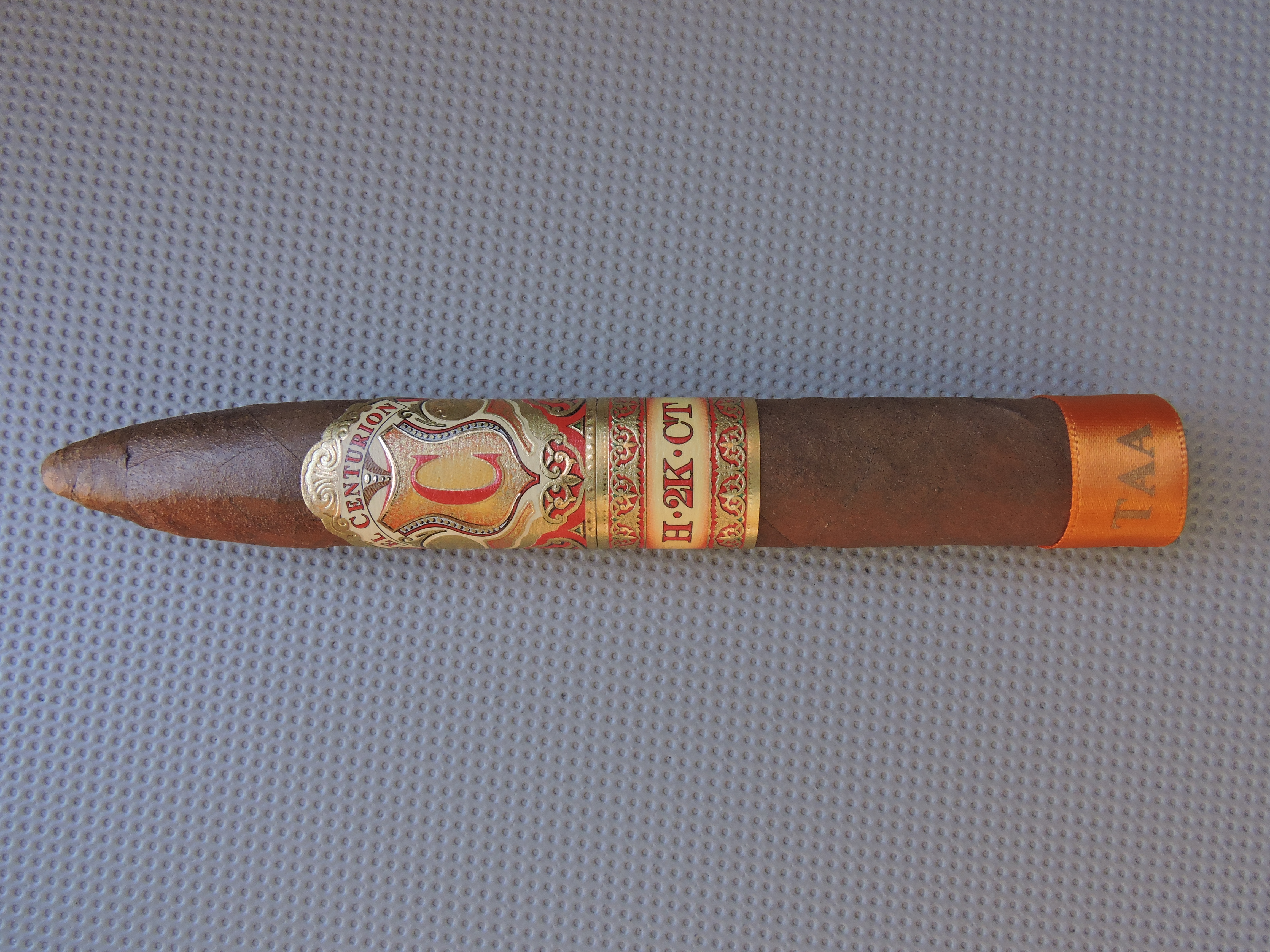 El Centurion is a brand that made its debut in 2007 as a limited edition cigar by Don Pepin Garcia. The brand returned in 2013 – this time with a new blend, new packaging, and now as a regular production cigar under My Father Cigars. As mentioned, the El Centurion H.2K.CT is an all-new offering under the El Centurion umbrella.

As mentioned, the release of the El Centurion H.2K.CT Box Pressed Torpedo is the fourth exclusive cigar for the TAA by My Father Cigars. An interesting footnote is that four separate My Father brands have been used for TAA cigars.

Without further ado, let’s break down the CLE Azabache 50 x 5 and see what his cigar brings to the table:

In addition to the unique Hybrid wrapper from Connecticut, the remainder of the blend consists of all Nicaraguan tobaccos grown by the Garcia family, owners of My Father Cigars.

Production of the El Centurion H.2K.CT Box Pressed Torpedo has been limited to 2,000 ten count boxes.

The Hybrid wrapper of the El Centurion H.2K.CT Box Pressed Torpedo had a medium to dark brown color to it. There was some oil coating the surface of the wrapper. There were also some thin visible veins and thin visible wrapper seams. The box-press of the cigar was on the firm side.

There are two bands on the El Centurion H.2K.CT. The primary band features a color scheme consisting of a red, gold, and an orange/peach combination. At the center of the band is a big red “C” on a shield shape. The shield has an gold/orange color Above the shield is an pale yellow ribbon with the text “EL CENTURION” in red font. To the left and right of the shield are gold medallions. In black font, the text “PREMIUM BLEND” and “MY FATHER CIGARS” to the left and right of the shield respectively. To the far right of the band, there is a small signature of Don Pepin Garcia. The remainder of the band has red and gold adornments on it.

Prior to lighting up the El Centurion H.2K.CT Box Pressed Torpedo, I used a straight cut to remove the tip of the cigar. As what I do with most torpedo cigars, I used my Credo Special T cutter with the 36 ring gauge hole to get an ideal cut for this figurado. This allowed me to take advantage of the tapering of this cigar. From this point, I commenced with the pre-light draw. The dry draw delivered a combination or orange spice, leather, and wood. Overall I considered this to be a satisfactory pre-light draw. At this point, i removed the ribbon of the El Centurion H.2K.CT Box Pressed Torpedo, lit up the cigar and moved on to the smoking phase.

The start of the El Centurion H.2K.CT Box Pressed Torpedo had a mix of white pepper, wood, and citrus notes. Early on the citrus notes moved into the background with the white pepper and wood notes remaining primary. As the H.2K.CT Box Pressed Torpedo moved through the first third, the pepper also receded into the background. The wood notes remained primary and from time to time there were also some coffee notes mixed in. Meanwhile, the retro-hale added additional layers of citrus and white pepper. I also detected some black pepper notes mixed in.

The second third saw the wood notes remain primary. The citrus and coffee notes still made their way into the forefront from time to time, but primarily remained in the background. Meanwhile I saw some of the black pepper notes join the white pepper in the background. Toward the start of the second half, the black pepper notes displaced the white pepper and began to increase in intensity.

Overall the burn performed quite well on the El Centurion H.2K.CT Box-Pressed Torpedo. The cigar maintained a straight burn path. There was some curviness on the burn line from time to time, but this was easily remedied with a few touch-ups. The H.2K.CT Box-Pressed Torpedo was never in danger of tunneling nor canoeing.  For the most part, the this cigar had a firm ash. There was some occasional flaking from time to time as well. The ash itself had a salt and pepper color to it.  Meanwhile the burn temperature and burn rate were ideal. 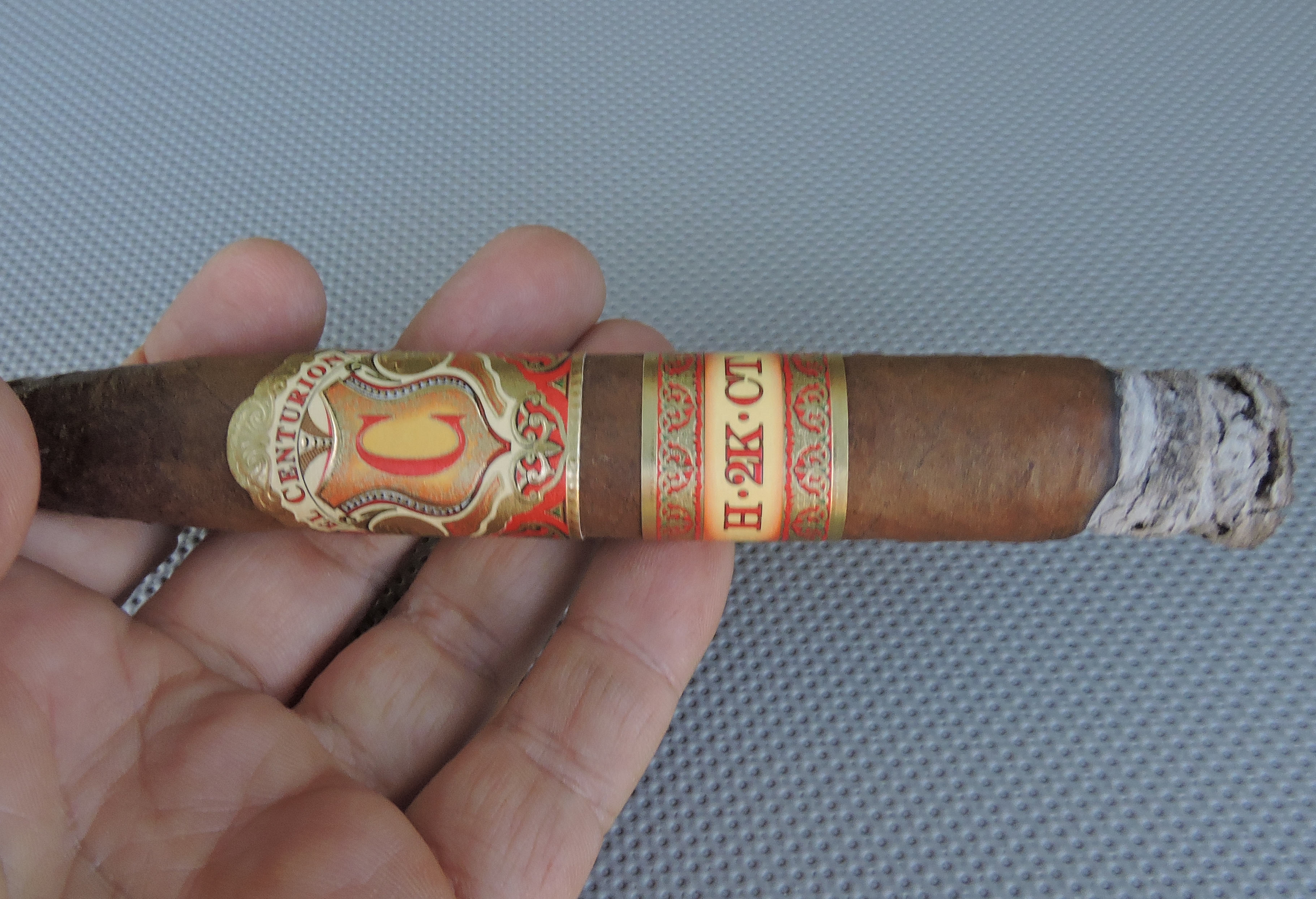 The draw to the El Centurion H.2K.CT Box-Pressed Torpedo performed quite well. This cigar maintained an ideal amount of resistance. As I puffed on this cigar, I found the area where I clipped the cigar to keep the smoke flowing quite well.

In terms of both strength and body, I found the H.2K.CT Box-Pressed Torpedo to be in the medium to full range. There was a slight increase in both attributes along the way, but overall I still found this cigar remained medium to full. Both the strength and body balanced each other nicely with neither one overshadowing the other.

I will admit when the El Centurion H.2K.CT  blend was released, my experiences were mixed with it. I had found the Corona and Toro sizes to be enjoyable, but also one dimensional. I didn’t know what to expect with the H.2K.CT Box Pressed Torpedo, but I was pleasantly surprised. I found the flavors to be more refined, and I also found this format to deliver an excellent level of complexity.

On the other hand, while this is a nice cigar, my expectation is that a TAA cigar should score a little higher – but that’s been an on-going critique I’ve had about many TAA Cigars in general. In terms of the H.2K.CT Box Pressed Torpedo, it’s still a cigar I’d recommend. It’s great for a seasoned cigar enthusiast, and a nice cigar for a novice to “graduate” to something in the “medium plus” range. As for myself, this is a cigar I would smoke again – and it’s worthy of picking up a fiver.