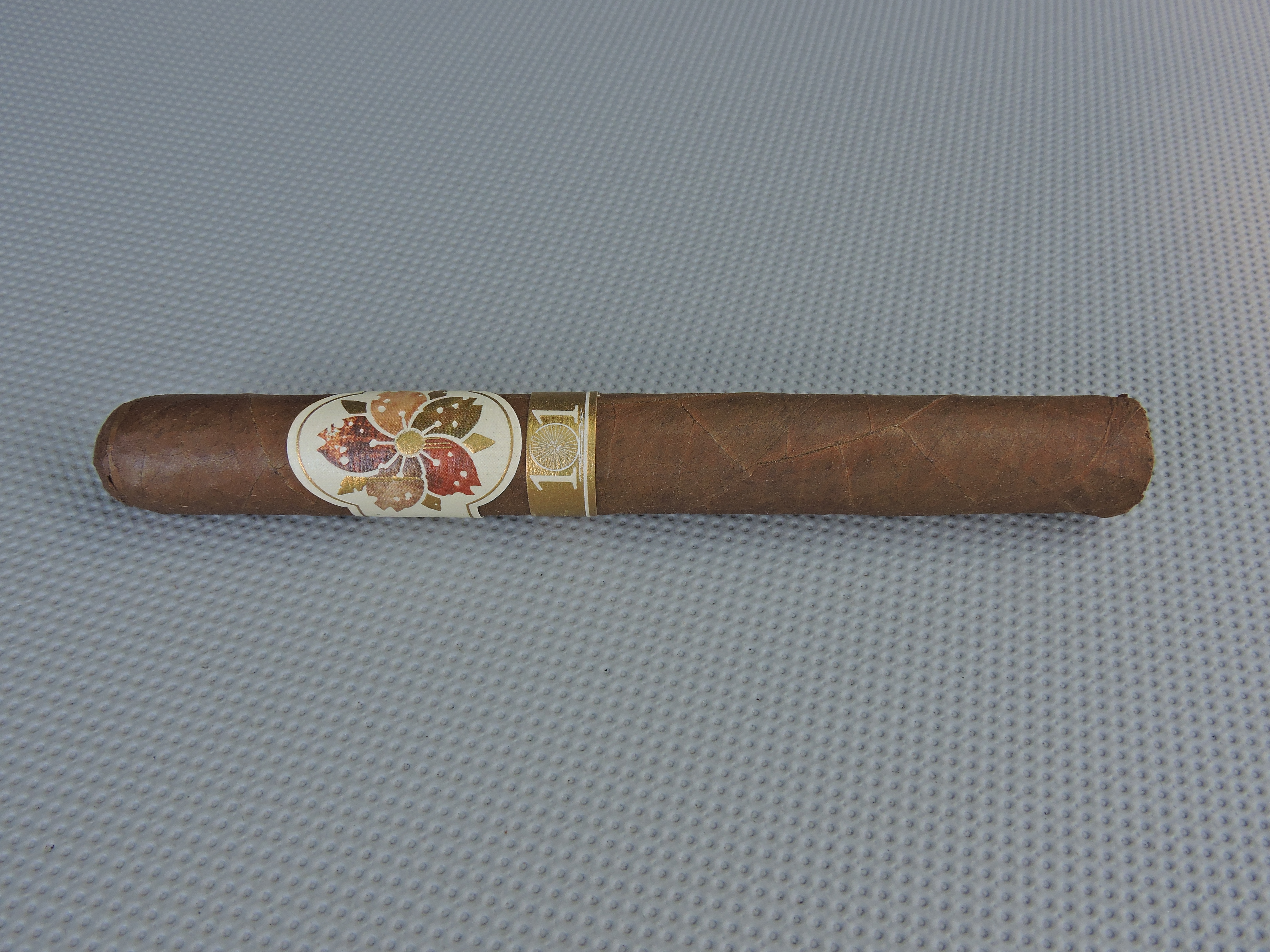 Hit & Run is one of two collaborations released in 2017 by Matt Booth and Robert Caldwell. Booth is best known as the owner of the Room 101 lifestyle brand, which includes cigars. For Booth, these two collaborations marked a return to the cigar industry after a brief hiatus. In January 2017, Booth announced he was ending his long-time partnership with Davidoff Cigars For over seven years, Davidoff had been handling the production and distribution of Booth’s Room 101 cigar brand. While Booth stopped short of calling it a retirement, it didn’t take long for him to come back. In terms of teaming with Caldwell, it provided Booth a mechanism for distribution and access to some of the production facilities Caldwell had been working with. About six months after stepping away, the first two collaborations were announced. These collaborations weren’t officially branded as Room 101 releases. Today we dive deeper into the Hit & Run collaboration in the Corona Gorda size.

The Booth-Caldwell alliance didn’t completely come out of left field. While the two were long-time friends, both shared a common connection in that each worked with Christian Eiroa. For Booth, when he entered the cigar industry, it was Eiroa who had provided production and distribution for his Room 101 brand. Things would shift to Davidoff following the sale of Camacho to Davidoff in 2008. When Eiroa founded C.L.E. Cigar Company, he partnered on a venture called Wynwood Cigars. The partnership was dissolved late in 2013 and just six months later, Caldwell had formed his own company, Caldwell Cigar Company.

Prior to splitting with Eiroa, Caldwell had been producing his cigars out of Honduras and a Miami factory the two owned in the Wynwood section. While he would eventually branch out to working with other factories, the first place Caldwell would work with to handle his production would be Tabacalera William Ventura. With Hit & Run, the alliance with Caldwell also led him to work with this factory – Booth’s first production in that country.

The duo also released a second collaboration called “The T”. This would see Booth and Caldwell team up with AJ Fernandez to produce the line – the first time the duo would work with Fernandez. Originally it was announced that the cigar would be called “The Truth,” but to avoid a potential trademark battle, the release was renamed to “The T“. For Booth, it would be his first cigar he would produce out of Nicaragua. Both Hit & Run and “The T” have been described as limited releases, but it’s unclear whether these are one and done or on-going limited production.

Hit & Run would also have an interesting soft-launch. The project started showing up at select retailers in early July concurrent with the announcement of the project. This was followed by a more-official launch at the 2017 IPCPR Trade Show.

Without further ado, let’s break down the Hit & Run Corona Gorda and see what this cigar brings to the table.

While Booth has been known for several Ecuadorian Habano blends in the Room 101 portfolio, this blend incorporates an Indonesian binder and Dominican filler – a combination not seen in a Room 101 blend before. 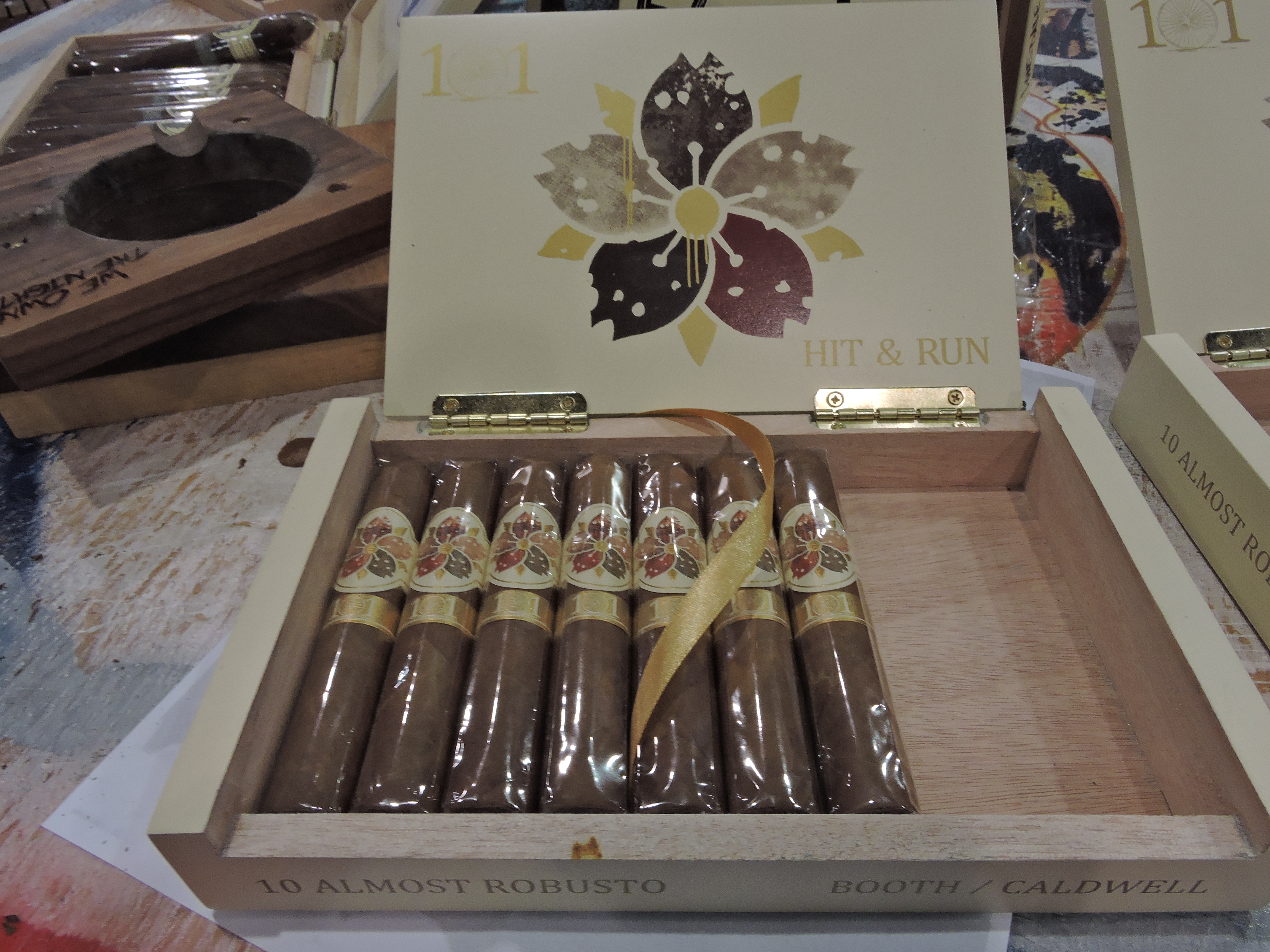 There are two bands on the Hit & Run. The primary band has an antique white background. Prominently on the front of this band is an autumn-colored Sakura (Cherry Blossom) – a design seen on much of Booth’s work in the past. On the left side is the text “2017” in a dull gold font and on the right side is the text “LTD” – also in a dull gold font. There is also a dull-gold frame surrounding the band.

The secondary band has a metallic gold background. There is a “101” on the center of the band. The band is a mashup of Room 101 and Caldwell Cigar Company as the “0” in the “101” looks like the Caldwell bicycle wheel logo.

Right out of the gate the Hit & Run Corona Gorda delivered a mix of plum, caramel, wood, and red pepper notes. The early stages saw the plum and caramel combination move to the forefront early on. The wood and red pepper settled into the background – and there was an additional layer of plum sweetness and red pepper on the retro-hale.

The last third saw the natural tobacco notes remain primary. The pepper was more prominent on the tongue than at any other point, but it was still far from overwhelming. I still detected a hint of caramel, plum, and grain. This is the way the Hit & Run Corona Gorda came to a close. The resulting nub was cool in temperature and slightly soft to the touch.

There were a few isolated cases of jaggedness on the burn line, but overall the Hit & Run Corona Gorda maintained a straight burn path. The resulting ash was light gray in color. On each sample smoked, there was a slight looseness in the ash during the first 3/4″ of the smoke, but this rectified itself for the remainder of the smoking experience. Meanwhile, the burn rate and burn temperature were both ideal. 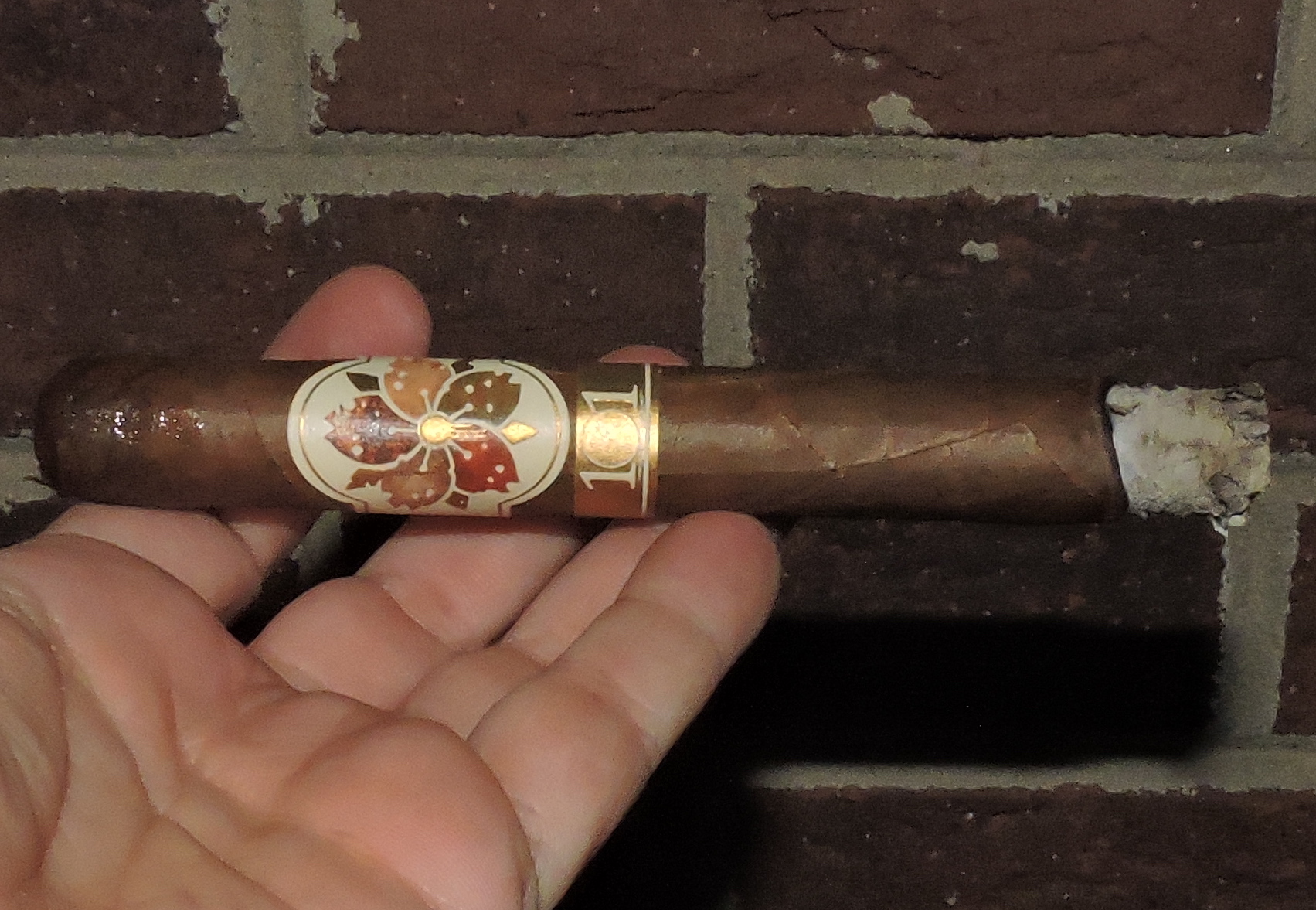 The draw to the Hit & Run Corona Gorda performed quite well. It had a nice balance of resistance and openness. This was a low maintenance cigar to derive flavor from.

While Matt Booth was never known for producing cigars with a lot of strength, the Hit & Run Corona Gorda is still one of the milder ones I’ve smoked. This is a cigar that pretty much stayed mild to medium in strength from start to finish. There was a slight uptick in strength at the midway point, but the Hit & Run Corona Gorda still remained in mild to medium territory.

Because this was a mild cigar, it didn’t mean there was no depth to the flavors. Overall I found the Hit & Run to be a medium-bodied smoke from start to finish. Like the strength, there was a slight uptick in the intensity level of the body, but the body didn’t quite advance out of the medium range.

Overall, the Hit & Run Corona Gorda is a very pleasing cigar. If you like a cigar with a lot of flavor transitions and flavor nuances, this is going to be the cigar for you. This is a very different cigar than anything Booth has released in the Room 101 line – and that’s understandable because Hit & Run is a cigar made with different tobaccos at a different factory and in a different country. At the same time, I didn’t find this was a “cookie cutter” of anything in the Caldwell portfolio either. One additional note – I’ve found the vitolas in Hit & Run to be quite distinct when it comes to flavor profile. While it’s tough to pick a “favorite”, I would put the Corona Gorda size at the top.

Hit & Run is a cigar that can be enjoyed by both the novice and experienced cigar enthusiast. As for myself, it’s a cigar I’d smoke again and it certainly warrants box worthy consideration.