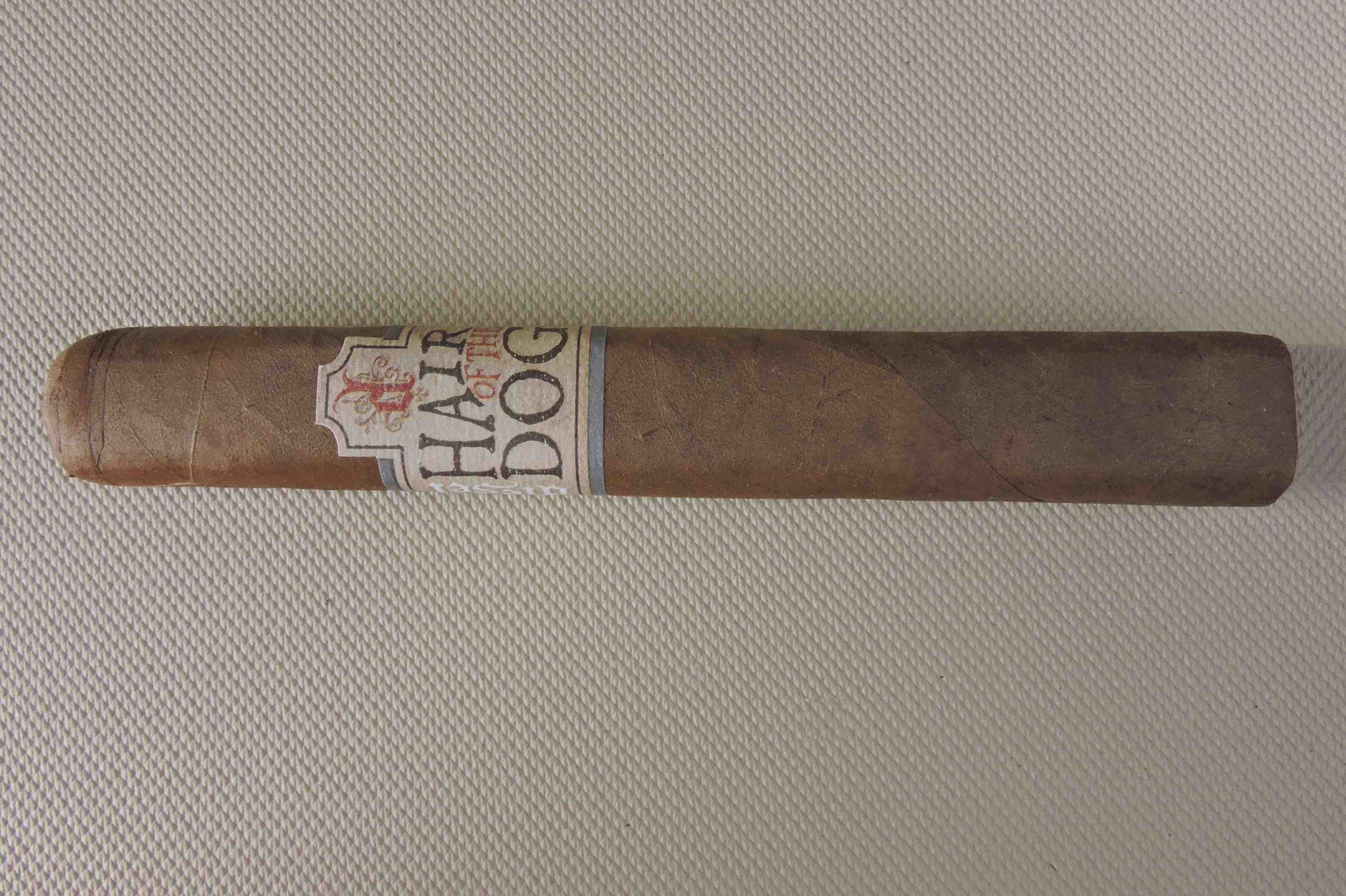 Diesel Hair of the Dog

The Diesel Hair of the Dog is a limited edition project released by General Cigar in 2019. It’s a project that has been done in collaboration between General Cigar and AJ Fernandez. Diesel is a brand under the General Cigar portfolio that has been gaining considerable traction over the past two years.  For many years, Fernandez produced cigars for the Diesel brand for Cigars International and its distribution arm Meier & Dutch, owned by General Cigar’s parent company Scandinavian Tobacco Group. In 2017, the Diesel brand was moved into General Cigar’s portfolio as a brick and mortar line. At that time, the Diesel Grind was shifted to General as a brick and mortar exclusive. This was followed up by the widely successful Diesel Whiskey Row in 2018, and there are plans for the Diesel Whiskey Row Sherry Cask (both of these collaborations with were done with Rabbit Hole Distillery) to be released next month. Sandwiched in between the two Whiskey Row releases was the Diesel Hair of the Dog. Today, we take a closer look at this project.

The name Hair of the Dog originally referred to a method of treatment of a rabid dog bite by placing hair from the dog into the wound. Legend has it that those hairs will prevent evil consequences. It also is an expression referring to a hangover cure where drinking more of the same alcohol consumed will lessen the original effects suffered. It somewhat fits into the theme of spirits that we have seen the Diesel brand use with the Whiskey Row projects.

Without further ado, let’s break down the Diesel Hair of the Dog and see what this cigar brings to the table.

Diesel Hair of the Dog marries an Ecuadorian Habano wrapper over an Ecuadorian Sumatra binder. The fillers consist of a blend of Nicaraguan Habano tobacco. The cigar is produced at AJ Fernandez’s Tabacalera Fernandez factory in Estelí, Nicaragua.

The Ecuadorian Habano wrapper of Diesel Hair of the Dog has a medium brown color to it. The wrapper has a sheen of oil on the surface of it. While there are some visible veins, the wrapper has a relatively smooth surface. Most of the wrapper seams are not very noticeable. The cigar itself has a Cuban Trunk press style to it.

The band of the Diesel of the Hair has a beige background with gray trim. On the center of the band is the text “HAIR OF THE DOG” with “HAIR” and “DOG” in large gray font and “OF THE” in smaller font. Above the text is a red “d” sitting over darker beige adornments. To the left of the text is the text “diesel” in white font.

The cigar experience of the Diesel Hair of the Dog commenced with a straight cut. Once the cap was removed, it was on to the pre-light draw ritual. The cold draw delivered a mix of wood, floral, and natural tobacco. I didn’t find this to be the most exciting pre-light draw, but given we do not incorporate the pre-light experience into the rating, there was no loss of points here. At this point, it was time to light up the Diesel Hair of the Dog and await what the smoking phase would have in store.

The Diesel Hair of the Dog kicked off with notes of earth, natural tobacco, floral, and a mix of black and red pepper. Early on the earthy notes developed a creaminess and moved into the forefront. The natural tobacco, pepper, and floral notes settled into the background. Meanwhile, there was an additional layer of red pepper on the retro-hale.

Midway through the first third, some coffee notes surfaced. The coffee notes along with the natural tobacco moved into the forefront joining the creamy earth notes. These notes each had a varying degree of intensity in the forefront. Concurrently the pepper and floral notes remained in the background.

As the Diesel Hair of the Dog moved into the second half, the creamy earth, natural tobacco, and coffee notes continued to alternate in intensity levels in the forefront. There was also a gradual increase in the pepper notes while the floral notes remained in the distant background.

Toward the last third of the cigar experience, the natural tobacco subsided into the background leaving the coffee and earth notes in the background. The pepper notes closed in on the forefront, but never overpowered the flavor profile – and the floral notes remained distant. This is the way the Diesel Hair of the Dog came to a close. The resulting nub was firm to the touch and cool in temperature.

The Diesel Hair of the Dog had no problem of maintaining a straight burn path. While there was a slight amount of jaggedness on the burn line, this didn’t prove to be problem-some and really didn’t warrant any additional touch-ups. The resulting ash was firm with a mostly silver-gray color. The burn rate and burn temperature were both ideal. 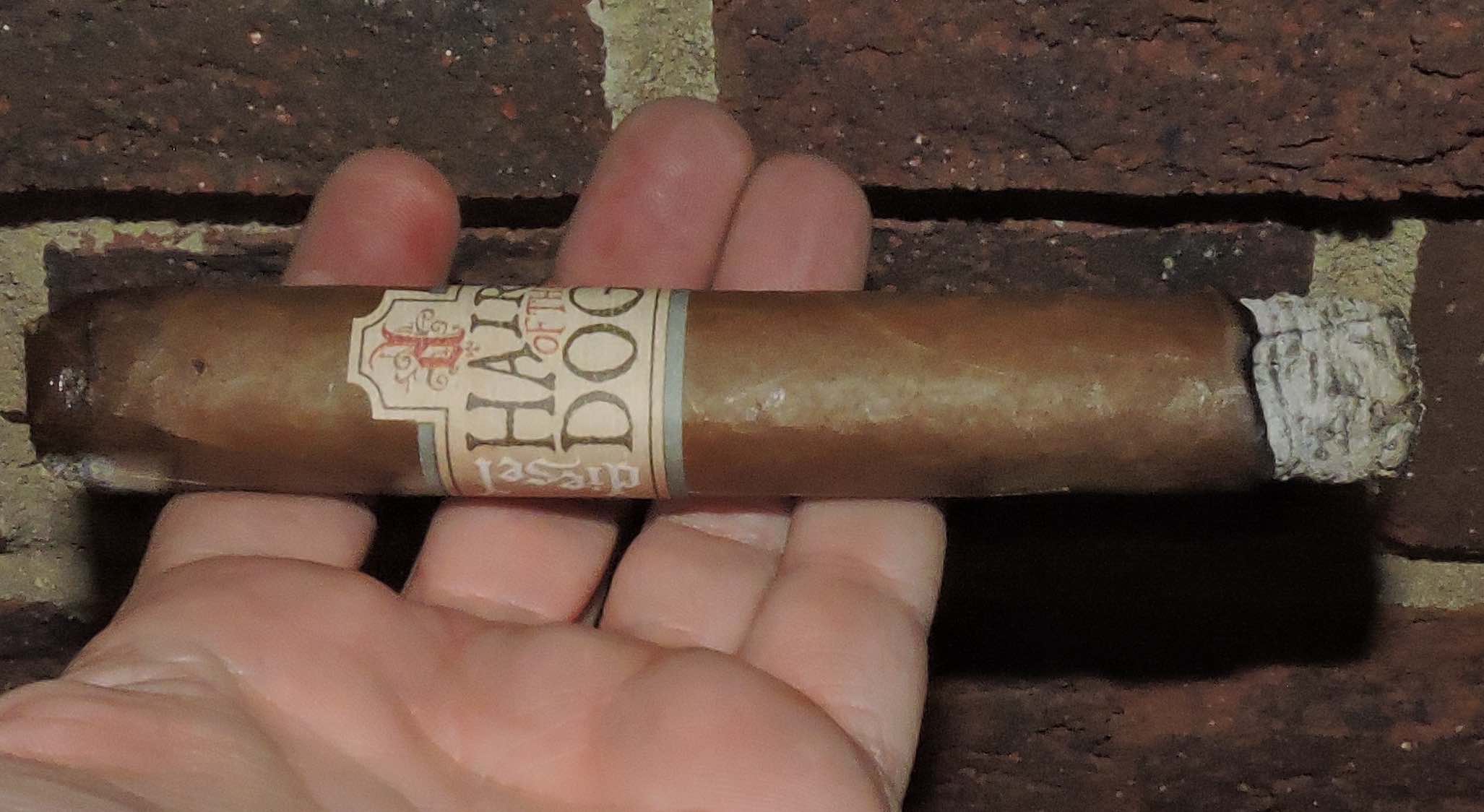 Burn of the Diesel Hair of the Dog

The draw to the Diesel Hair of the Dog performed quite well. It had a nice balance of openness and resistance – which I think is very important on a box-pressed cigar. This was a cigar the produced an ample amount of smoke.

For the most part, I found the Diesel Hair of the Dog to have a medium strength, medium-bodied profile from start to finish. There was a slight increase in the intensity of both attributes in the second half, but I didn’t find the increase enough to push the cigar into medium to full territory. In terms of strength versus body, I found both attributes balanced each other very nicely with neither attribute overshadowing the other.

One thing that I found interesting is when the Diesel Hair of the Dog was released was that General Cigar mentioned this was a cigar that was meant to complement the original Diesel Whiskey Row. I concur that there are some definite parallels with the flavor profiles. At the same time, there are plenty of differences as well. Diesel Hair of the Dog is one of those cigars that each time I smoked it, I was able to pick up something else from. It brings flavor, complexity, and excellent construction into one nice package. It’s a cigar I could recommend to the novice or experienced cigar enthusiast. As for myself, it’s one I would smoke again – and it garners box worthy consideration.