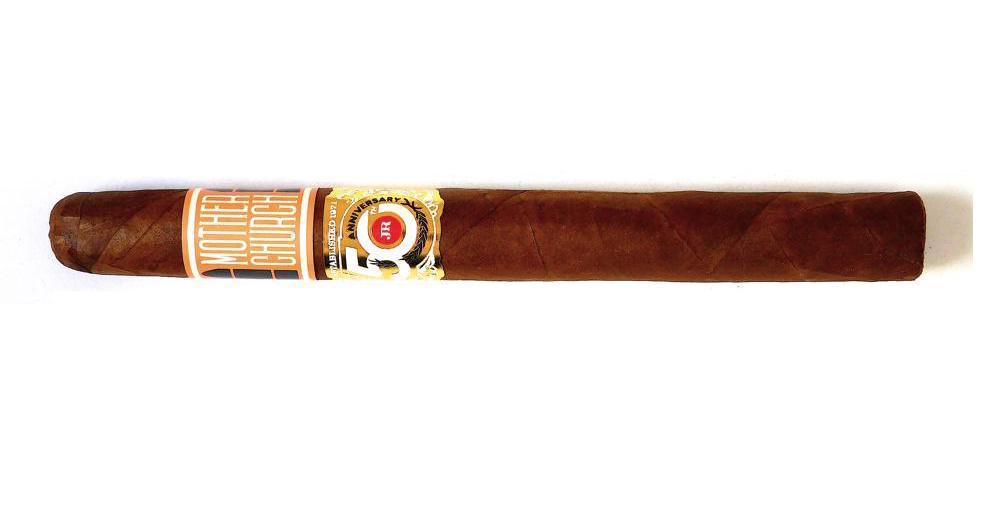 The year 2021 marks the 50th anniversary of JR Cigar. Technically the start of JR Cigar goes back to 1970 when Jack Rothman (thus the name JR) opened his first cigar store in New York City. It was a year later when Jack’s son Lew Rothman was approached by a customer asking if he could have cigars mailed back to his home state, thus the famous JR Cigar mail-order business was born. Today JR Cigar is a part of the Tabacalera USA family and maintains both a brick and mortar and a mail-order business. Over the years JR Cigar has built many important partnerships with its suppliers. To commemorate the 50th anniversary, rather than commission one manufacturer to produce a special cigar, JR Cigar has teamed with a series of manufacturers. Today we take a look at the second installment of the series, which comes from Crowned Heads and is called Mother Church JR 50th..

At press time, there have been six releases in the JR 50th series. Some of these have come directly from the Tabacalera USA family (Romeo y Julieta, Montecristo and Aging Room). Others have come from companies outside of Tabacalera USA. It is anticipated there will be more JR 50th releases throughout 2021.

When it comes to Crowned Heads Cigars, there always is a story and theme. In the case of Mother Church, it pays homage to the city of Nashville where Crowned Heads is based. Specifically, the cigar gets its name from Ryman Auditorium in Nashville, formerly known as the Grand Ole Opry House. Due to its origins as The Union Gospel Tabernacle in 1892, the Ryman has long been known as Mother Church by Nashville natives. 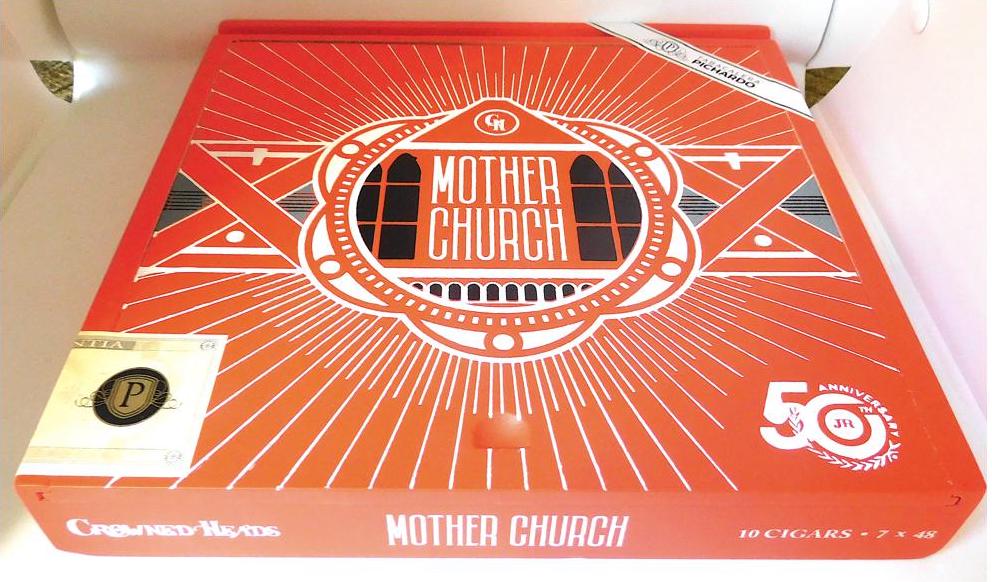 Without further ado, let’s break down the Crowned Heads Mother Church JR 50th and see what this cigar brings to the table.

Mother Church features an Ecuadorian Corojo ’99 wrapper, a Connecticut Broadleaf binder, and aged tobacco from three of the main growing regions in Nicaragua. The cigar is produced out of Tabacalera Pichardo, the factory owned by Crowned Heads’ strategic alliance partner ACE Prime.

The Crowned Heads Mother Church JR 50th is available in one size – a 7 x 48 Churchill. The cigars are presented in 10-count boxes with a total production of 500 boxes. 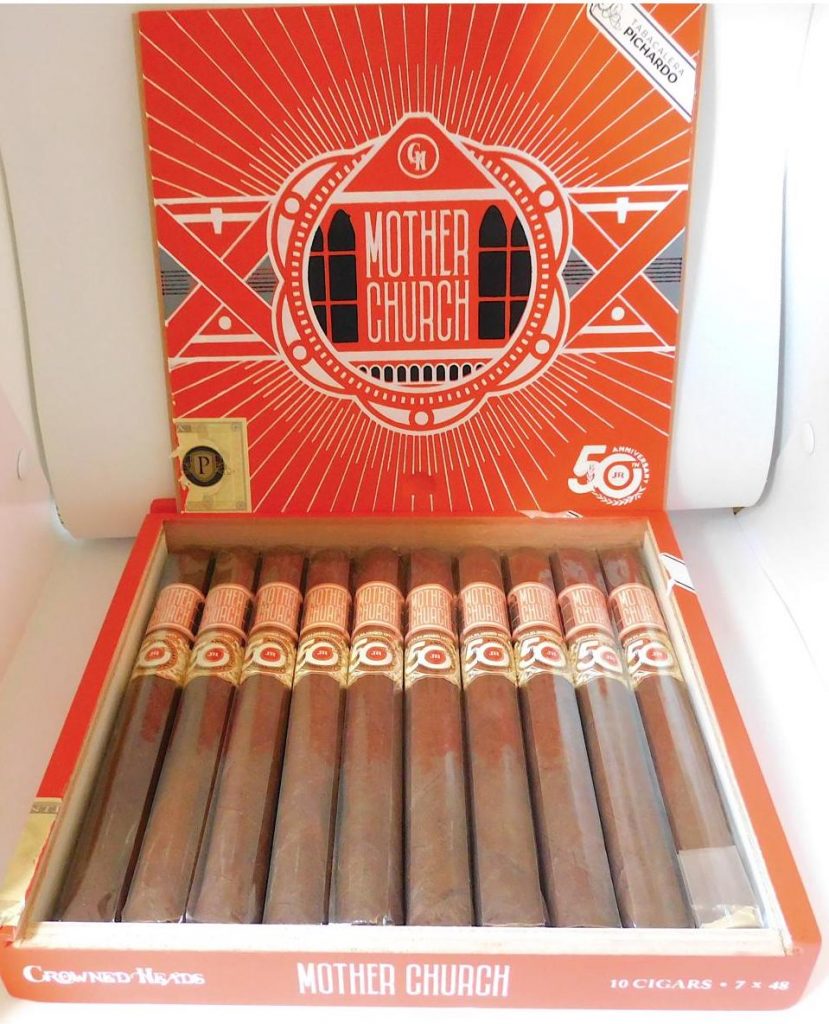 The Ecuadorian Corojo wrapper of the Mother Church JR 50th had a medium brown color with a slight rosado tint to it. This was a wrapper that had a slightly bumpy surface and didn’t have much in the way of oil on it. There also were some visible wrapper seams and visible veins.

There are two bands on the Mother Church JR 50th. The primary band is peach-colored with the text “MOTHER CHURCH” in large white font. The left and right sides of the band have imagery that resembles the stained glass windows and church-like features of the Ryman Auditorium.

The secondary band is one that is common to the JR 50th series. It is a gold band with the red, white, and black JR 50th Anniversary logo surrounded by white adornments. On top of the logo is the text “ESTABLISHED 1971” in white font.

A straight cut was used to commence the smoking experience of the Crowned Heads Mother Church JR 50th. Once the cap was removed, it was on to the pre-light draw. The cold draw delivered a mix of natural tobacco, floral, cedar, and cream notes and made for a satisfactory pre-light draw experience. At this point, it was time to toast the foot of the Mother Church JR 50th and see what the cigar experience would do.

The Crowned Heads Mother Church JR 50th started out with notes of natural tobacco, berry sweetness, earth, black, pepper and cream. Early on the natural tobacco and berry notes moved into the forefront with the earth, pepper, and cream notes settling in the background. Both the berry and natural tobacco imparted a nice, but not overpowering sweetness on the flavor profile. Concurrently, there was an additional layer of berry and black pepper on the retro-hale.

During the second third of the Mother Church JR 50th, the natural tobacco notes took control as the sole primary note. The berry sweetness diminished into the background. As the cigar progressed there also was a decrease in the creamy notes, and a slight increase in intensity of the black pepper notes on the tongue.

There wasn’t much change in the last third. The natural tobacco notes remained primary. The pepper notes remained in the background and no longer had a significant increase in intensity. There were still some notes of berry and earth rounding out the flavor profile. This is the way the smoking experience of the Mother Church JR 50th came to a close. The resulting nub was slightly soft to the touch and cool in temperature.

In terms of burn, the Mother Church JR 50th performed as flawlessly as any cigar I have had in 2021. This is a cigar that required almost no touch-ups to maintain a straight burn path and straight burn line. The resulting ash had a silver-gray color. This was an ash that was on the firmer side. As for the burn rate and burn temperature, both performed at ideal levels. 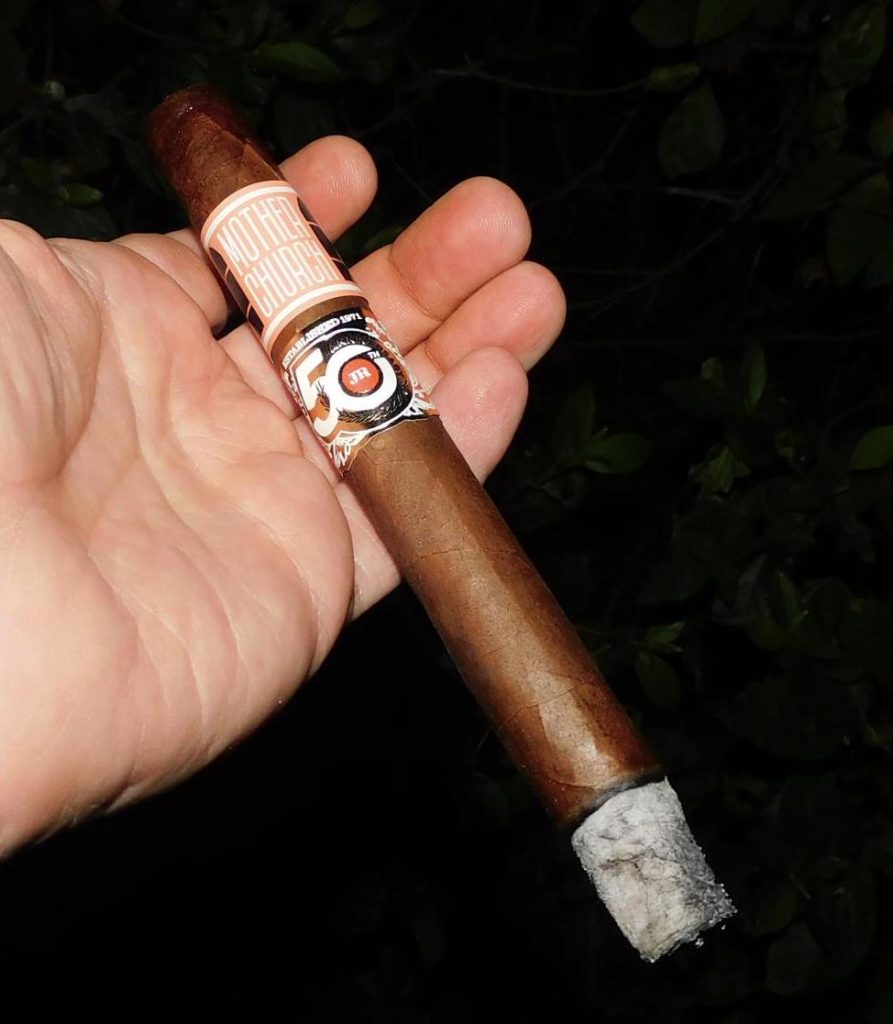 I have been quite impressed with the array of cigars JR has assembled as a part of the 50th-anniversary series. It’s also great to see an assortment of companies both large and small that are participating in the project. With the Mother Church, Crowned Heads delivers an excellent cigar. As mentioned this is a cigar that is on the refined side. Most importantly it delivers excellent flavor – and it’s a cigar unlike any that has been seen from Crowned Heads.