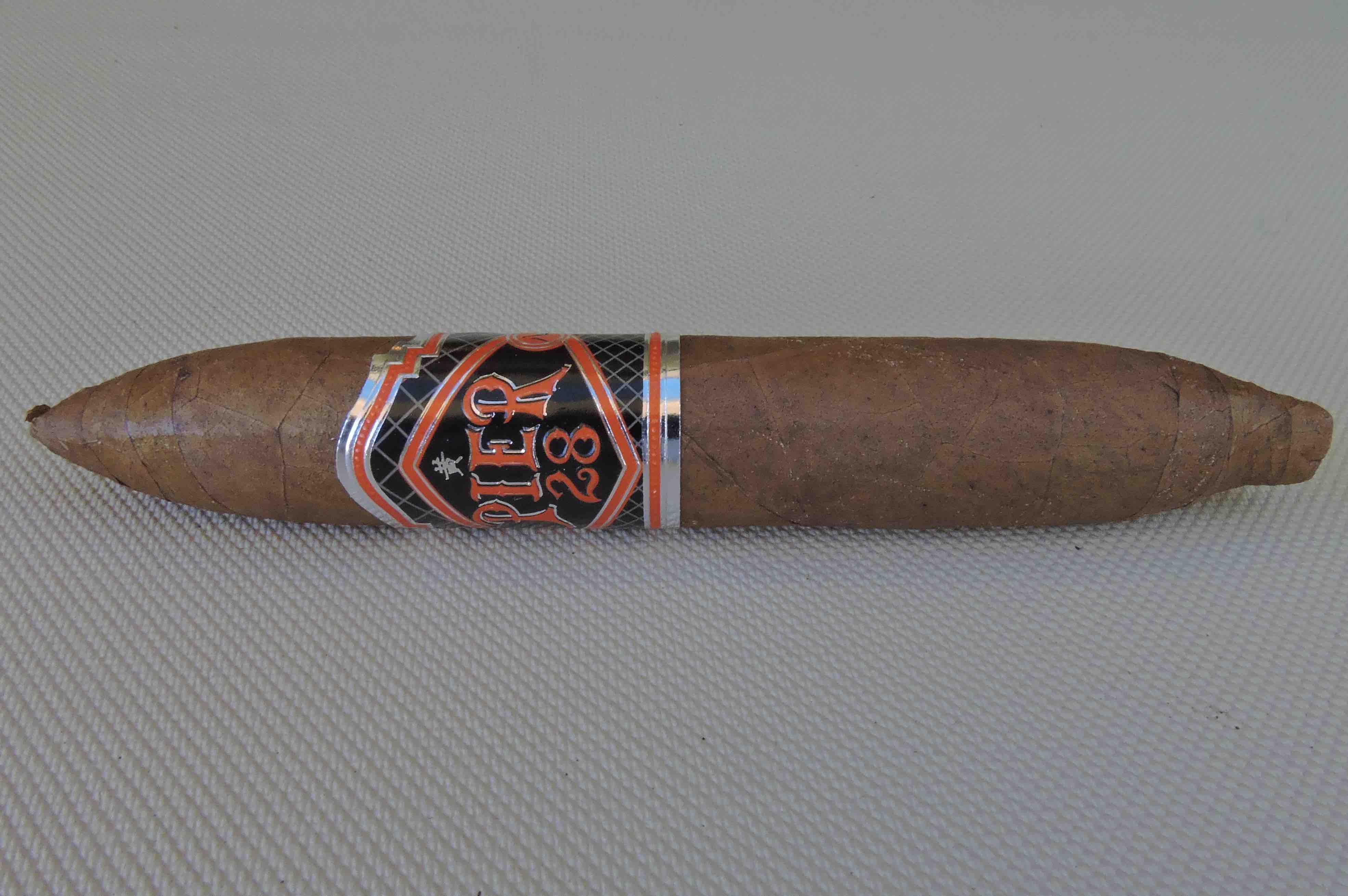 The Pier 28 Oscuro uses a dark Brazilian wrapper. Over the past few years, Espinosa Cigars has been incorporating more wrappers from Brazil. These were made popular by Espinosa’s Laranja Reserva release. As Wong explained to us on Prime Time Episode 79, some of the Brazilian wrapper was on the darker side and not appropriate to use on the Laranja. As a result, Wong was able to tap into some of this tobacco and made us of it. Oscuro means dark – and it’s because of this darker wrapper the cigar derived its name.

Without further ado, let’s break down the Pier 28 Oscuro Perfecto and see what this cigar brings to the table.

In addition to the Brazilian wrapper, the Pier 28 Oscuro features tobaccos used for the binder and filler from Nicaragua.

Wong mentioned on Prime Time Episode 79 that the vitola size for the perfecto was based on the 601 La Bomba Bunker Buster, but the difference is while the Bunker Buster was box-pressed, the Pier 28 Oscuro is rounded.

The Brazilian Oscuro wrapper of the Pier 28 Oscuro Perfecto had a medium brown color with a cinnamon tint to it. There was a light coat of oil on the surface of the wrapper. There were some visible wrapper seams and some prominently visible veins. The perfecto had a nozzle-like extension near the footer and a sharper taper toward the cap.

The band to the Pier 28 Oscuro has a black background with a gray chicken-wire pattern to it. The middle of the band has a chrome-colored baseball-diamond shape design. In the middle of the diamond is the text “PIER” in a large orange font with the text “28” in a slightly smaller chrome-colored font. At the top of the diamond is a chrome-colored Asian symbol etched on it. The left and right sides of the diamond have a circular design each with a symbol engraved on it. The band is surrounded by bright orange and chrome trim. The right of the band features an orange circular design that has a more vivid yellow color on the right side. There is also an Asian symbol etched on it.

A straight cut was used to commence the smoking experience of the Pier 28 Oscuro Perfecto. The Credo Special T cutter with the 36 ring gauge hole was used in order to get an ideal cut and take advantage of the tapering. From that point, it was on to the pre-light draw. The dry draw delivered a mix of natural tobacco, citrus, and floral notes. This was a satisfactory pre-light draw. At this point, it was time to light up the Pier 28 Oscuro Perfecto and see what the smoking experience would provide.

The Pier 28 Oscuro Perfecto started out with more notes of natural tobacco, earth, and citrus. The natural tobacco notes had a definite wood-like quality fused into it. Both the natural tobacco and citrus notes became primary. Meanwhile, the earth notes settled in the background. During the early phases as the cigar burned through the nozzle-footer, some red pepper notes emerged. Once the Pier 28 Oscuro Perfecto reached the base of the cigar, a creamy texture surfaced in the forefront. Meanwhile, there was an additional layer of red pepper on the retro-hale.

By the second third, the creaminess and citrus both subsided leaving the natural tobacco/wood combination in the forefront. As the Pier 28 Oscuro Perfecto moved through this stage, there was an increase in the earthy notes. The pepper notes had a very slight increase in intensity as well.

Once the Pier 28 Oscuro Perfecto reached the last third, the earth notes joined the natural tobacco/wood combination as primary notes. The red pepper notes had increased as well on the tongue, and some black pepper could also be detected in the equation. Meanwhile, the citrus notes were in the more distant background. This is the way the Pier 28 Oscuro Perfecto came to a close. The resulting nub was soft to the touch but cool in temperature.

The burn of the Pier 28 Oscuro Perfecto performed quite well. While at times there was a slight amount of curvature on the burn line, the Pier 28 Oscuro Perfecto was never in danger of meandering and did not require additional touch-ups. The resulting ash was mostly light gray with some darker streaks mixed in. For the most part, this was an ash that was on the firmer side. Meanwhile, the burn rate and burn temperature were ideal. 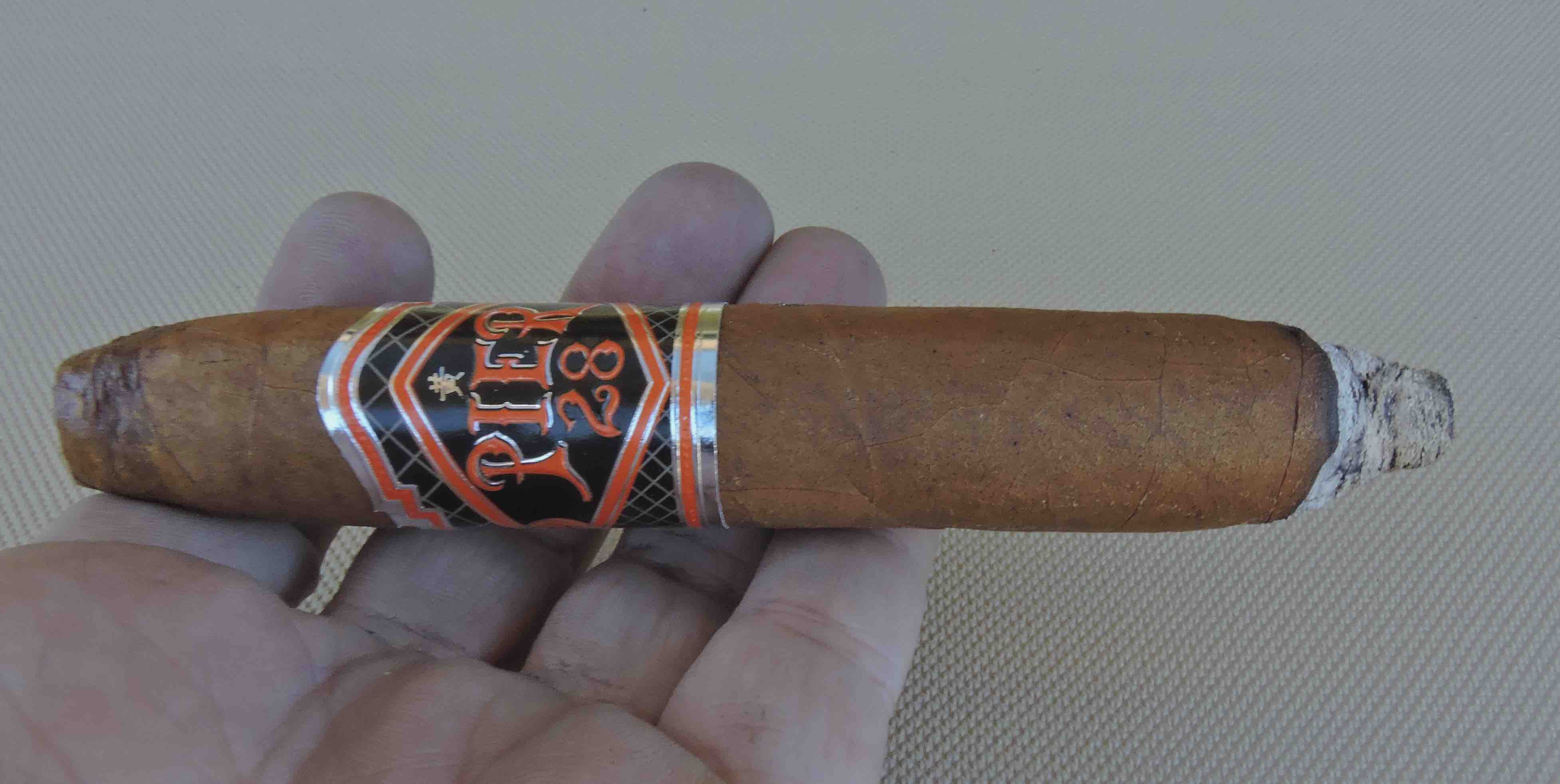 Burn of the Pier 28 Oscuro Perfecto

When it came to strength and body, the Pier 28 Oscuro Perfecto started out medium. Past the midway point,  there was a slight increase in intensity to both attributes, but in the end, the cigar didn’t get out of the medium range of the spectrum for both strength and body. In terms of strength versus body, both attributes balanced each other nicely with neither attribute overshadowing the other.

Now three blends into his career as a cigar brand owner, Tim Wong once again delivers another excellent offering. The creaminess that was present early on gave the Pier 28 Oscuro Perfecto a softer profile than the Pier 28 Habano and Maduro offerings, but as the cigar progresses and some of the spices build up, it demonstrates some of the “bite” that cigars out of La Zona are known for. This isn’t a cigar that’s going to deliver flashy nor exotic flavors, yet at the same time, it offers very good flavors and still smokes different from anything else I’ve had out of La Zona. This is a cigar I would recommend to either a novice or experienced cigar enthusiast. As for myself, this is a cigar I would smoke again – and buy multiples for my humidor.