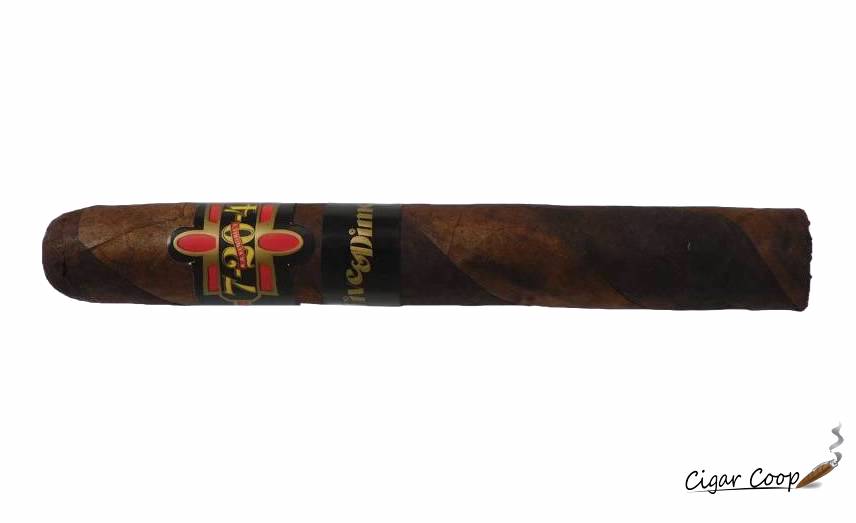 The 7-20-4 Hustler Five & Dime is a cigar that was made exclusive by 7-20-4 Cigars for retailers who placed orders at the Premium Cigar Association (PCA) Trade Show.  PCA Trade Show exclusive cigars are not a new concept, but in 2021, the PCA made an attempt to somewhat formalize these trade show releases into an exclusive series. The model was similar to what had been done for the exclusives to the Tobacconist Association of America (TAA). A total of 17 cigars were announced as a part of the 2021 PCA Exclusive Series. In the case of the 7-20-4 Hustler Five & Dime, it is an extension to the popular regular production 7-20-4 Hustler. Like the original Hustler, the Five & Dime is a barber pole. One difference is that it features a completely different blend. Visibly the Five & Dime features two darker wrappers intertwined into a barber-pole design. Today we turn our attention to the 7-20-4 Hustler and take a closer look at this cigar.

The following is the list of the 2021 PCA Exclusive Series. Some other companies may have offered PCA Exclusives, but these were the ones recognized and promoted by the PCA.

Without further ado, let’s break down the Asylum PCA Exclusive 2021 and see what this cigar brings to the table.

The 7-20-4 Hustler Five & Dime features a combination of dark Mexican San Andres and Brazilian Habano wrappers. The remainder of the blend consists of a Sumatra Binder, as well as Pennsylvania, Estelí, and Jalapa fillers. Production comes from the Jesus Fuego Factory in Estelí, Nicaragua. The Fuego factory is known for its use of Brazilian tobacco.

The 7-20-4 Hustler Five & Dime is available in one size – a 6 x 52 Toro. In addition to this being a limited release for PCA attendees, this was a limited production release with 1,000 ten-count boxes produced. 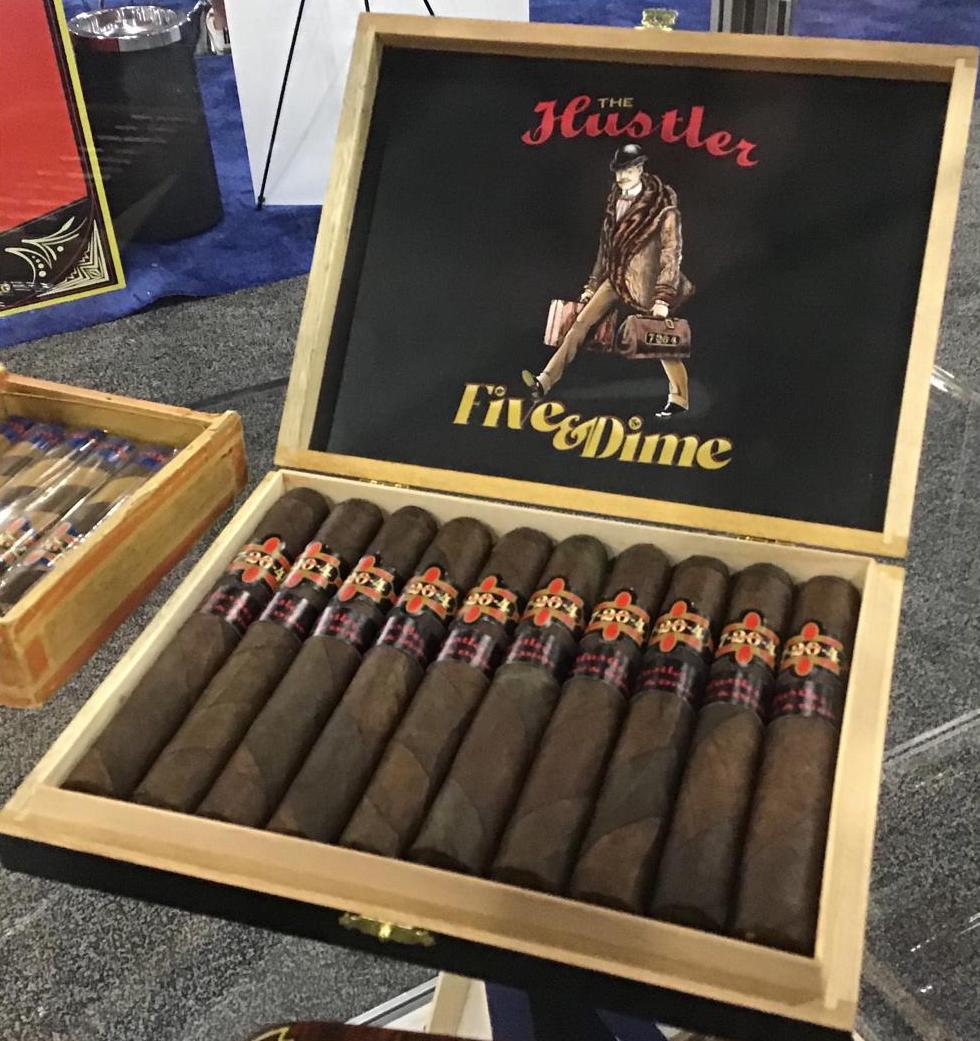 As we noted, the Mexican San Andres and Brazilian Habano wrappers of the 7-20-4 Hustler Five & Dime are on the darker side, making for an interesting contrast to the wrapper. Upon closer examination, some mottling on the wrapper can be detected. I noted some light oils on the wrapper. The barber pole had clean wrapper seams. There also were some thin visible wrapper seams.

The 7-20-4 Hustler Five & Dime picked up where the pre-light draw left off with notes of coffee, earth, and fruit surfacing in the forefront. In addition, there were some cedar and pepper notes that also surfaced in the background. As the cigar moved through the first third, the coffee notes got richer and eventually emerged as the dominant note. Meanwhile, the retro-hale had an additional layer of fruit sweetness and cedar.

During the second third of the 7-20-4 Hustler Five & Dime, the coffee notes remained primary, but there was an increase in the cedar and pepper notes. At the same time, the pepper also became more prominent on the retro-hale. In addition to the pepper and cedar, there were still notes of earth and to a lesser extent fruit in the background.

While the cedar notes leveled off in the final third, there was still a slight increase in the pepper. The coffee notes remained the dominant notes and essentially kept the 7-20-4 Hustler Five & Dime from becoming a spice bomb. Meanwhile, there still were notes of earth and fruit present. As the 7-20-4 Hustler Five & Dime came to a close, the resulting nub was soft to the touch and cool in temperature.

While there was a slight amount of curviness, overall the burn of the 7-20-4 Hustler Five & Dime performed very well. This was a cigar that maintained a straight burn path and straight burn line with minimal touch-ups needed. The ash was nearly white in color and skewed toward the firmer side. At the same time, there was some minor flaking. Meanwhile, the burn rate and burn temperature were both ideal. 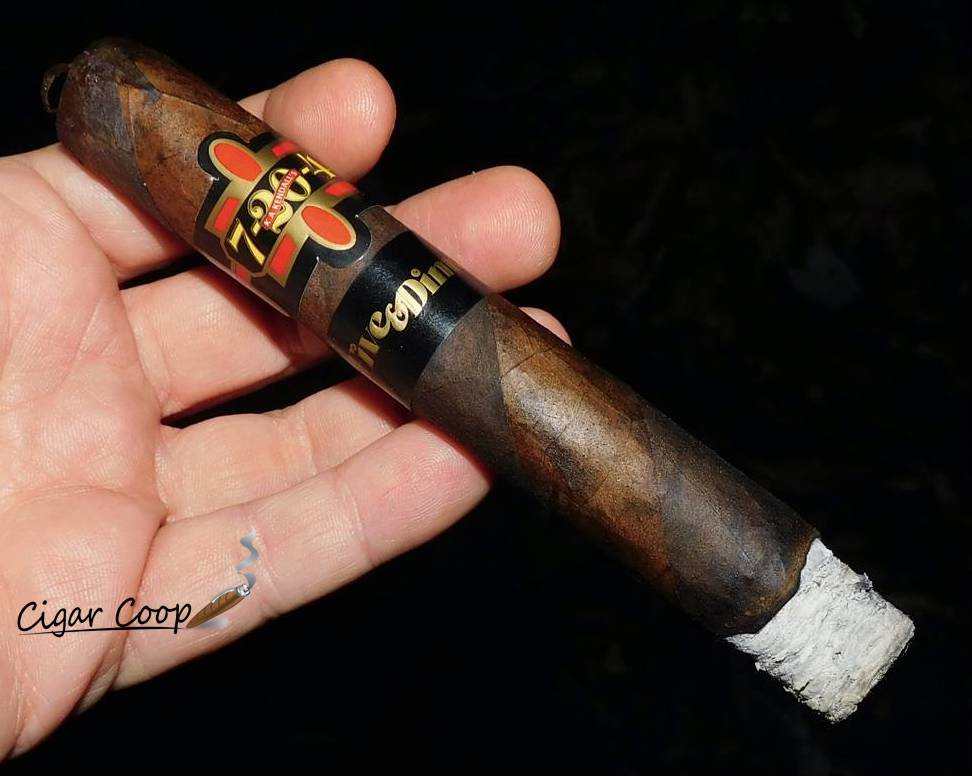 Normally I like a little resistance on the draw, but in the case of the 7-20-4 Hustler Five & Dime, there were times the resistance was a little more than I prefer. As a result, at times I had to work to derive flavor from these cigars.

For a dark barber-pole, I was expecting more in the way of strength, but the 7-20-4 Hustler Five & Dime started out mild to medium in strength before progressing to medium in the second half. The body remained medium, and didn’t have a huge amount of variance. In terms of strength versus body, the body maintained a slight edge.

Kurt Kendall’s vibe of nostalgia comes through loud and clear in his packaging. The band of the Five & Dime is a variation of the regular production 7-20-4 Hustler. The difference is that blue is replaced by black. While the blue had a better retro effect, I do think the black made for a better-looking band.

From its visual and packaging perspective, I do believe the 7-20-4 Hustler Five & Dime checks all of the boxes for what a PCA Exclusive cigar should have. You can definitely taste the San Andres and Brazilian wrappers in play as this was a coffee and earth-forward cigar with some spice. In the end, this is a cigar I can recommend to any cigar enthusiast. As for myself, this wasn’t a cigar that had had a lot of wow factor, but it was still a satisfactory smoke – and one I would buy and purchase again from time to time.