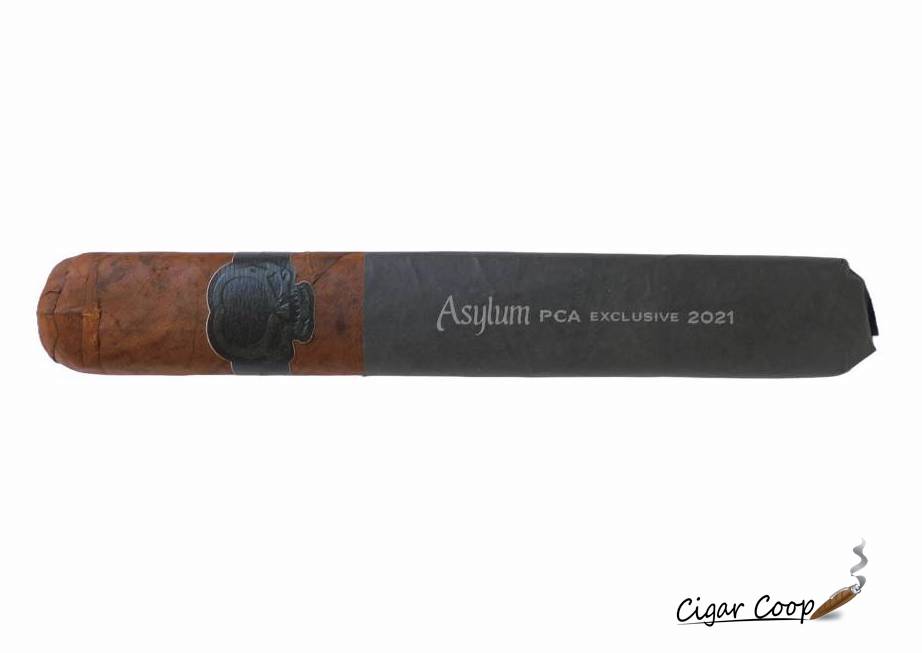 For several years, many companies have been offering exclusive cigars to those retailers that attend the annual IPCPR/PCA Trade Show and place an order. In 2021, the Premium Cigar Association (PCA) made an attempt to somewhat formalize these trade show releases into an exclusive series.  The model was similar to what had been done for the exclusives to the Tobacconist Association of America (TAA). A total of 17 cigars were announced as a part of the 2021 PCA Exclusive Series. CLE Cigar Company would be one of the companies to participate in offering exclusive cigars to attendees of the 2021 PCA Trade Show. They would offer the EIROA PCA Exclusive and Asylum PCA Exclusive at both the 2021 and 2022 PCA Trade Shows. Today we take a closer look at the Asylum PCA Exclusive 2021.

Following is the list of the 2021 PCA Exclusive Series. Some other companies may have offered PCA Exclusives, but these were the ones recognized and promoted by the PCA.

Without further ado, let’s break down the Asylum PCA Exclusive 2021 and see what this cigar brings to the table.

The Asylum PCA Exclusive 2021 is a 100% Honduran puro that is made in Honduras. The cigar is highlighted by a hybrid Habano wrapper. 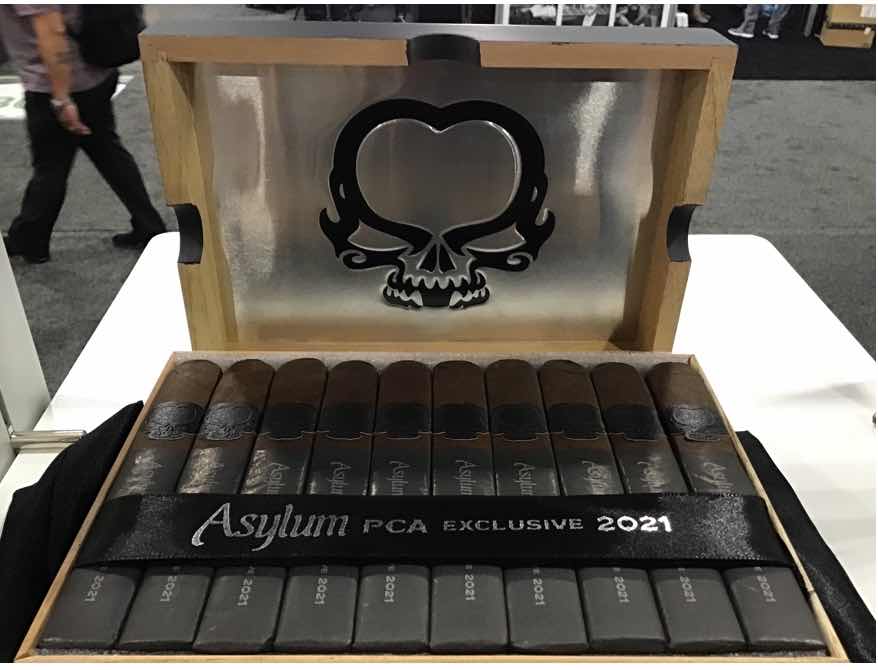 Packaging of the Asylum PCA Exclusive 2021

The 11/18 is a size introduced by Christian Eiroa during his Camacho days. The vitola is a shape that is cylindrical that has tapering from both ends, but is not tapered as narrow as a perfecto or salomon. In the case of the Asylum PCA Exclusive 11/18 it is a 60 ring gauge at its thickest point and a 52 ring gauge at its thinnest point. The one thing a little different with the Asylum PCA Exclusive 2021 is that the cigar is box pressed – something that hasn’t been done on a lot of cigars. The size is named for the birthday of Eiroa’s mother.

The Habano wrapper of the Asylum PCA Exclusive 2021 11/18 had a roasted coffee bean color to it. There was a light amount of oil on the surface of the wrapper. There also was some mottling present on the surface. There were some visible veins and visible wrapper seams.  The 11/18 shape is known for its “bulge” in the center of the cigar. In the case of the 11/18 vitola, the box-pressing minimizes the bulge, but it still can be noticed from certain angles. 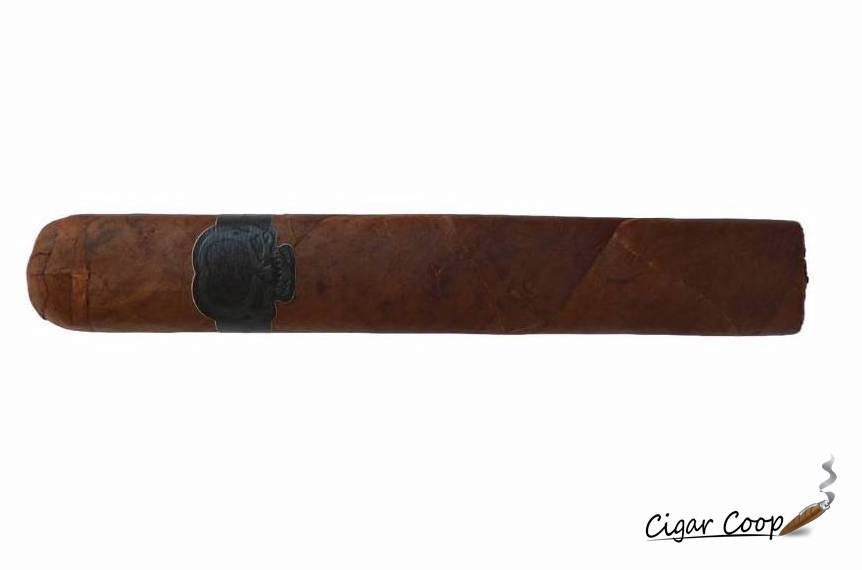 Prior to lighting up the Asylum PCA Exclusive 2021 11/18, the tissue sleeve that covered about 5/8 of the cigar from the footer was removed. A straight cut was then used to remove the cap. Once the cap was removed, it was on to the pre-light draw ritual. The dry draw delivered notes of natural tobacco, coffee, and some light spices. Overall this was a satisfactory pre-light draw. At this point, it was time to toast up the Asylum 13 PCA Exclusive 2021 11/18 and move on to the smoking phase.

The Asylum PCA Exclusive 2021 11/18 started with more notes of natural tobacco and coffee. These notes moved into the forefront. Meanwhile, there were also cedar, earth, and vegetal notes that emerged in the background. As the cigar progressed through the first third, some red pepper notes surfaced on the back of the tongue. Meanwhile, there was an additional layer of red pepper mixed with vegetal notes on the retro-hale.

During the second third of the Asylum PCA Exclusive 2021 11/18, the coffee and natural tobacco notes remained in the forefront. The vegetal, cedar, earth, and pepper notes started to inch closer toward the forefront. Toward the middle of the second third, the pepper and cedar notes began to increase at a more rapid pace. Meanwhile, the pepper component on the retro-hale increased. The retro-hale now had both red and black pepper components to it.

The final third of the Asylum PCA Exclusive 2021 11/18 saw the coffee and natural tobacco remain in the forefront. The pepper was now the most prominent of the secondary notes. Meanwhile, cedar, earth, and vegetal notes rounded out the flavor profile. As the cigar experience came to a close, the cigar finished with a cool and soft nub.

The Asylum PCA Exclusive 2021 11/18 required multiple touch-ups to maintain a straight burn path and straight burn line. While the touch-ups kept things on point, there were more touch-ups required than I prefer. The resulting ash was light gray. This was a slightly loose ash. As for the burn rate and burn temperature, both were ideal. 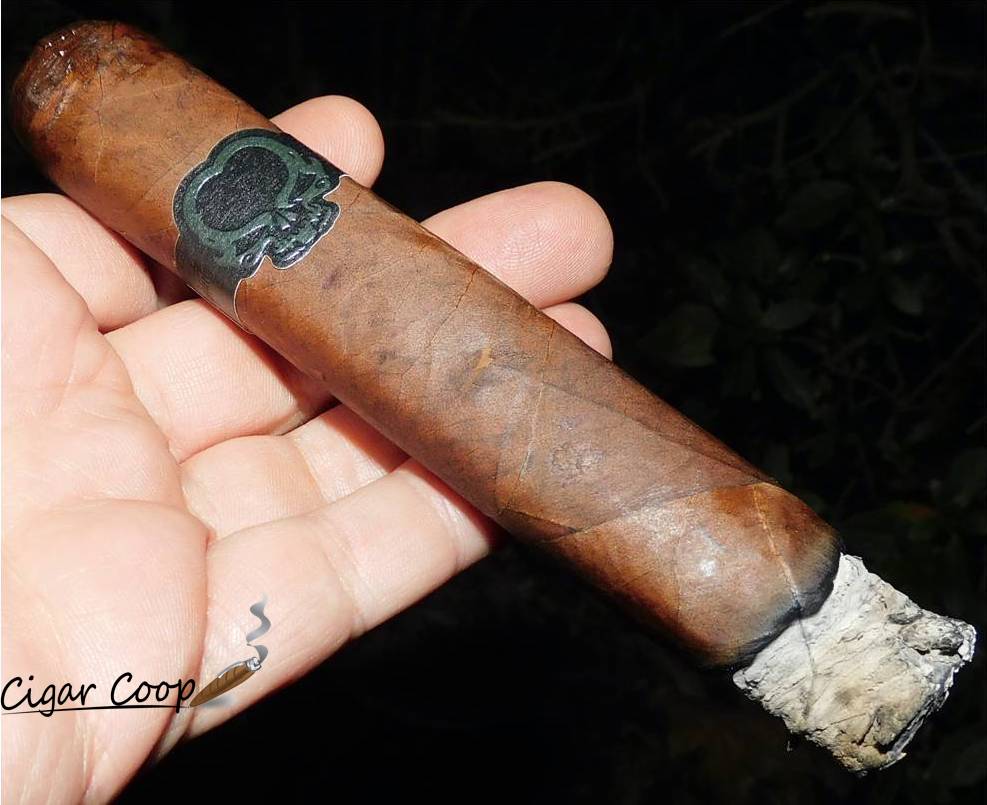 Overall the draw of the Asylum PCA Exclusive 2021 11/18 was a little more open than I prefer. I find that happens with many box-press vitolas. I wasn’t totally surprised this was the case given the unusual shape of the 11/18. There were no adverse effects other than my preference for a little more resistance on the draw.

The Asylum PCA Exclusive 2021 11/18 delivered a medium strength, medium to full-bodied smoking experience. There wasn’t a huge amount of variance in the intensity levels throughout the smoking experience. In terms of strength versus body, the body maintained the edge.

The Asylum 13 PCA Exclusive 2021 features a black matte-finished band with the Asylum logo on it along with a tissue sleeve that covers about 5/8 of the 11/18 cigar. I found the design to work quite well, and the black color contrasted with the wrapper nicely. The fact that the lid of the box can also be used as an ashtray is a nice touch as well.

One note – the bands on each of the Aganorsa Leaf Aniversario Maduro Short Churchill were difficult to remove. In almost every case, I had to tear the band to remove it.

The Asylum PCA Exclusive 2021 had its moments but overall this cigar didn’t have enough wow factor for me. Good flavor, but not great flavor. The problem is this cigar falls short of what I expect from a $17.00 cigar, and it’s a cigar that falls short of being a PCA Exclusive – and it isn’t going to have me running out to a Trade Show to make my orders. I do think the Hybrid Habano wrapper has promise, and I’m curious to try this cigar in the other sizes as well as the 2022 rounded format. This cigar comes in at an 87, but it’s definitely a cigar I’d recommend trying a sample of first before making a purchase.