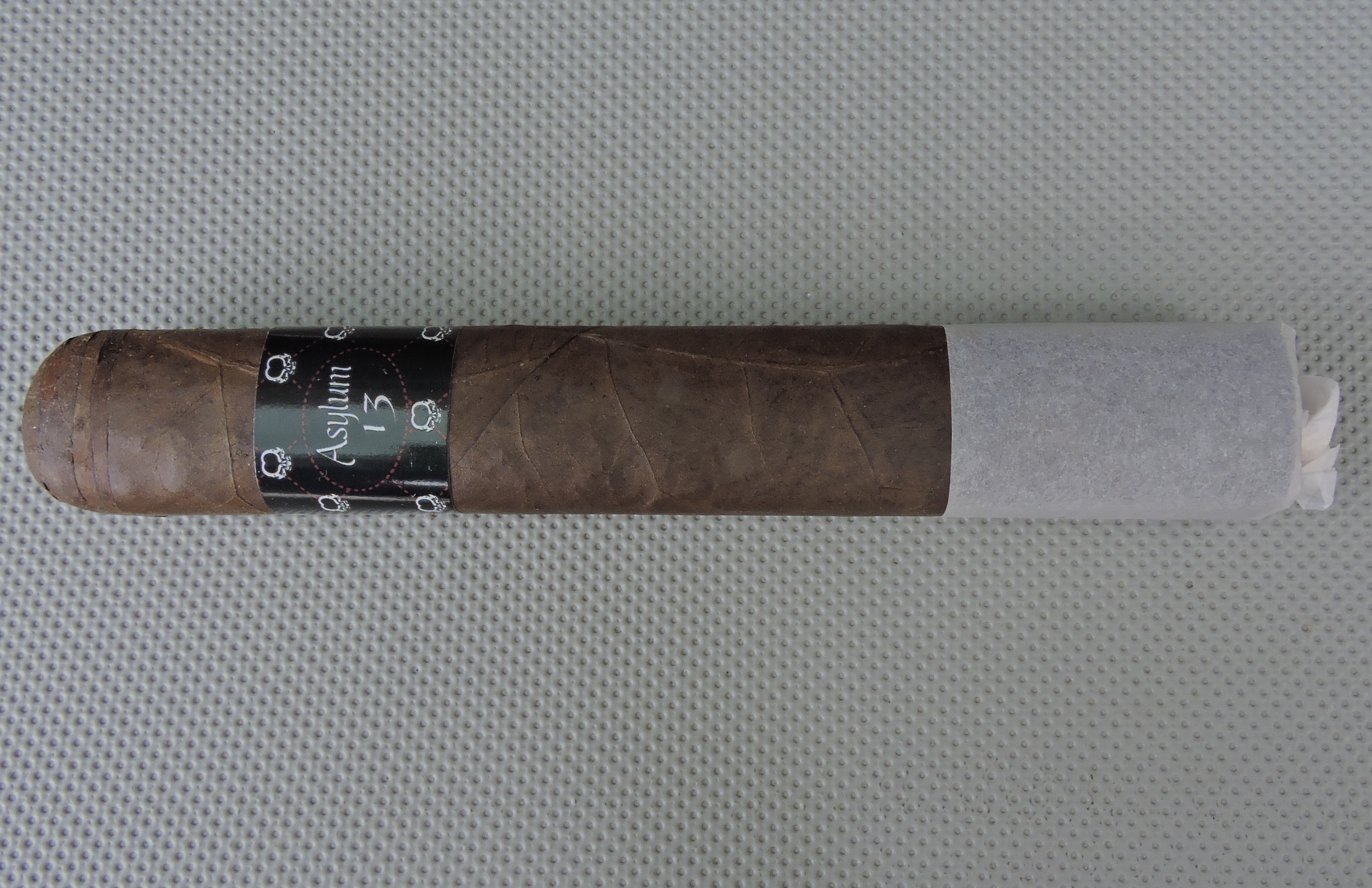 For the third consecutive year, C.L.E. Cigar Company is releasing an exclusive cigar for the Tobacconists Association of America (TAA). While the past two years have seen C.L.E. release new blends to the TAA, for its 2018 release, the company made a decision to create a line extension to one of its most popular lines, the Asylum 13. For this line extension, Asylum released its first box-pressed cigar in the form of a 70 x 7 vitola (later the year Asylum would release the Asylum 13 Oblongata – a box-pressed line featuring a different blend). Today, we take a deeper dive in the Asylum 13 Box Pressed 70 x 7 that was released as a 2017 TAA Exclusive.

As mentioned above, this is the third release from C.L.E. Cigar Company for the TAA. The previous two TAA releases were eventually incorporated into regular production by C.L.E. At press time, C.L.E. has not said whether the Box Pressed 70 x 7 will follow the same path. One other note on C.L.E.’s 2017 TAA release: unlike the previous two releases, which were multi-vitola offerings, the Asylum 13 Box Pressed 70 x 7 is a single-size line extension.

Without further ado, let’s break down the Asylum 13 Box Pressed 70 x 7 and see what this cigar brings to the table.

The Asylum 13 blend is an all-Nicaraguan puro produced in Nicaragua.

In addition to the Nicaraguan blend, Asylum 13 has several other blends under the line: Asylum 13 Authentic Corojo, Asylum 13 Medulla Oblongata, Asylum 13 Connecticut and the barber-pole Asylum 13 Ogre.

The Nicaraguan Asylum 13 blend has been used on the following vitolas:

The Nicaraguan wrapper of the Asylum 13 Box Pressed 70 x 7 had a chocolate brown color to it. Upon closer examination, there was some mottling on the surface. There was a light coating of oil on the surface. This was a smooth box press. There were some visible veins on the thin side. Any wrapper seams were well hidden by the dark color of the wrapper. As for the box-press, it had a slight soft press style to it.

The band to the Asylum 13 Box Pressed 70 x 7 features the same design found on the Nicaraguan Asylum 13 line. It is mostly black and white with some red accents. In white font is “Asylum 13” on a black background.  There is a thin red dotted design on the front of the band.  There are what I would categorize as white skull designs that adorn the band as well.

The footer of the cigar is covered with tissue paper.  Given that this is a large cigar, this helps protect the footer as it is more prone to cracking. I’ve heard C.L.E. Cigar Company founder Christian Eiroa say many times he does not like cellophane on his cigars.

After removing the tissue paper from the footer of the Asylum 13 Box Pressed 70 x 7, I used a straight cut to remove the cap. I used a cutter that specializes in cutting large ring gauge (60 to 70) sized cigars and it allowed me to get a clean cut. Once the cap was removed, I proceeded with the pre-light draw. The dry draw produced notes of earth, cedar, and a slight natural tobacco sweetness. Overall, I considered this to be a satisfactory pre-light draw. At this point, I lit up the Asylum 13 Box Pressed 70 x 7 and awaited what the smoking experience would have in store.

The Asylum 13 Box Pressed 70 x 7 produced a mix of chocolate, white pepper, earth, and what I term “maduro sweetness” – this is a combination of natural tobacco and dried fruit notes. Early on, the chocolate notes moved to the forefront, but by the midway point of the first third, the maduro sweetness joined the chocolate notes in the forefront. Meanwhile, there was an additional layer of white pepper on the retro-hale.

The last third of the Asylum 13 Box Pressed 70 x 7 saw an increase in the white pepper notes. The earth notes still remained a primary flavor. While the white pepper had increased in intensity, it never overpowered the blend, nor made it a spice bomb. There were still touches of maduro sweetness present as well. This is the way the Asylum 13 Box Pressed 70 x 7 came to a close. The resulting nub was firm to the touch and cool in temperature.

Burn-wise, I found the Asylum 13 Box Pressed 70 x 7 did need some touch-ups along the way. While the I wouldn’t consider the number of touch-ups to be excessive, this was still a burn that could not go on auto-pilot. The resulting ash had a salt and pepper color scheme to it. This wasn’t the firmest ash, but it wasn’t a loose or flaky ash either. As for the burn rate and burn temperature, both were ideal. 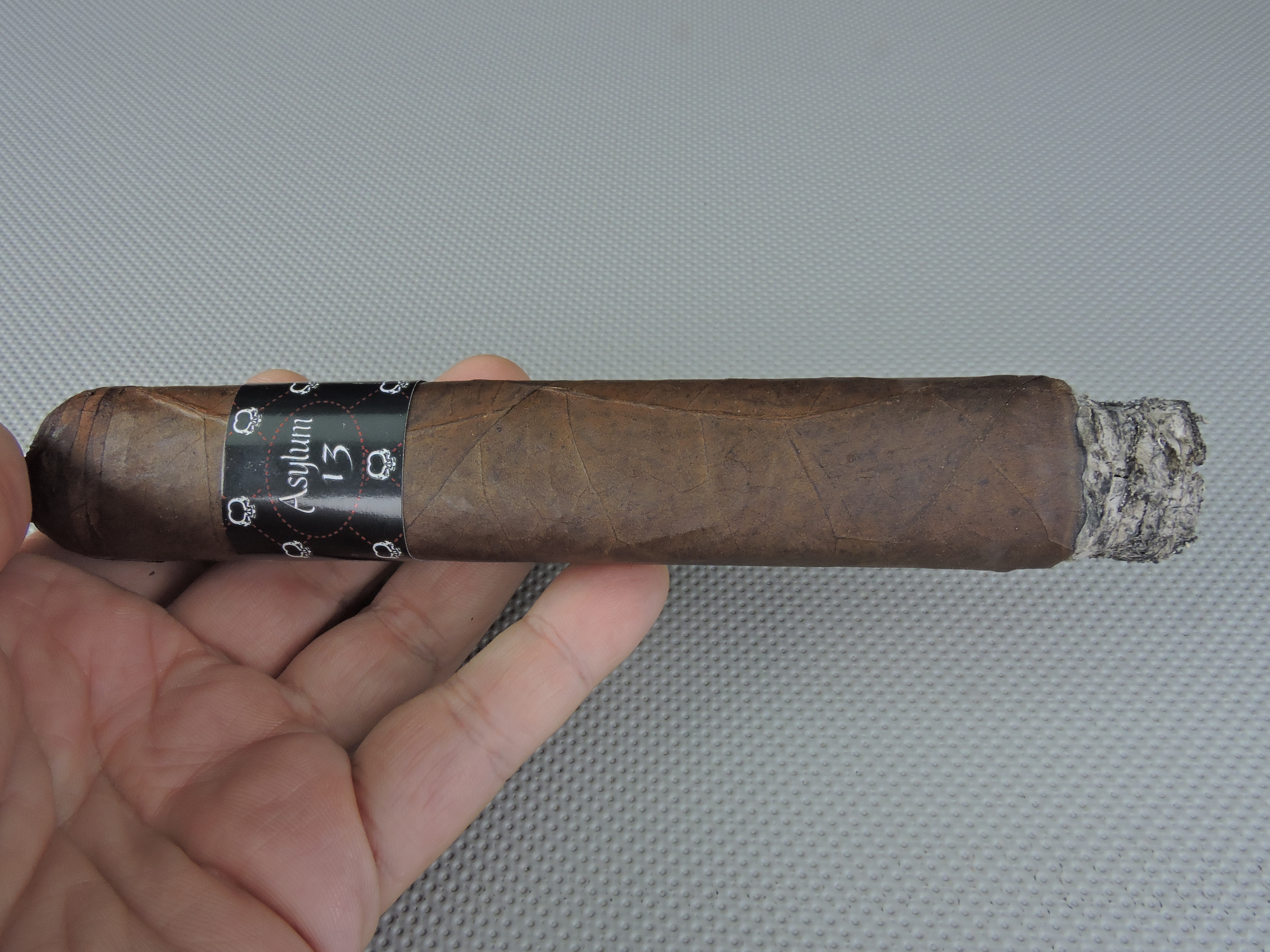 The draw to the Asylum 13 Box Pressed 70 x 7 performed quite well. In fact, this draw didn’t have the openness that most box-pressed cigars have. This cigar maintained an ideal amount of resistance throughout the smoking experience. It produced an ample amount of smoke. Like most box-pressed cigars, the surface area to puff on is a little bit less than a parejo. However make no bones about it, the Asylum 13 Box Pressed 70 x 7 is very much going to feel like a big ring gauge cigar.

In terms of strength and body, I found the Asylum 13 Box Pressed 70 x 7 to be in the medium range for both attributes. Along the way, I didn’t find any variance in the intensity levels of either the strength or body. This was also a cigar where the strength and body balanced each other nicely with neither attribute overshadowing the other.

I will say it again: the TAA needs to do a better job at marketing their exclusive cigars. Asylum has been a red hot brand for several years. This was the first Asylum box-pressed cigar, yet the TAA did little to nothing to help promote this cigar at the level it should have been promoted. That being said, if you are a fan of the Nicaraguan Asylum 13 brand – and you are a fan of the 70 and 80 ring gauge offerings in this blend, I think this is the cigar for you.  In my opinion, Asylum does some very good work on both the blend and construction of these large ring gauge cigars – and the Asylum 13 Box Pressed 70 x 7.

This cigar scores on par with how I have scored most of the Asylum 13 line. In my opinion, I still would want a little more out of a TAA cigar, but in the end, that didn’t impact my final assessment or score. This is a cigar I could recommend to any cigar enthusiast. Even if one doesn’t like big ring gauge cigars, I’d encourage them to try. As for myself, this is one that I would definitely buy and smoke again.