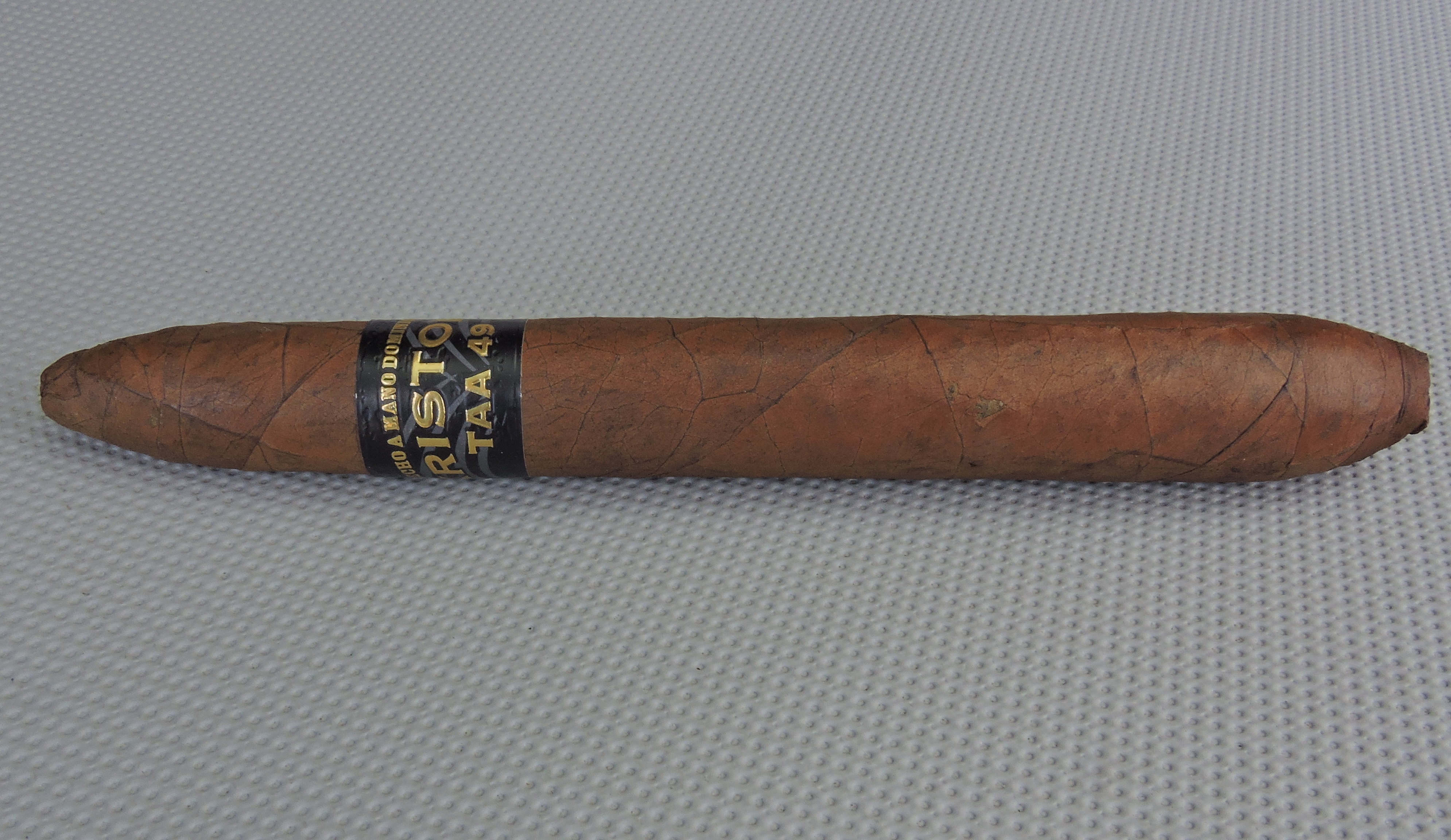 As mentioned above, the Kristoff TAA Exclusive 49 is officially the first Kristoff to be a part of a TAA Exclusive Series. According to the TAA’s website, this will be an on-going release for the TAA (as opposed to a one-time limited release). For reference, we include the list of the two other releases that were offered up to TAA retailers first.

Without further ado, let’s break down the Kristoff TAA Exclusive 49 and see what this cigar brings to the table.

The Kristoff TAA Exclusive 49 features tobaccos from the three major tobacco growing countries in Latin America outside of Cuba. The cigar is highlighted by a dark Honduran Criollo wrapper.

The Kristoff TAA Exclusive 49 is available in one size – a 7 1/2 x 56 Salomon. The cigars are presented in tten-countboxes.

The Honduran Criollo wrapper of the Kristoff TAA Exclusive 49 had a dark wood to it. There was some oil on the surface of the wrapper. While there were some visible veins and visible wrapper seams, I considered the TAA Exclusive 49 to have a smooth wrapper. As for the salomon, this vitola had a sharper taper toward the cap while the footer has a nozzle-like shape. There was a gentle taper with an open footer. This salomon had its widest point just above the nozzle.

The band to the Kristoff TAA Exclusive 49 was black in color with gold font. The wrapper is highlighted by the “KRISTOFF” in the brand’s signature curved font. Just above that text is the text “HECHO A MANO DOMINICANA”. The lower part of the band has the text “TAA 49”.

Prior to lighting up the Kristoff TAA Exclusive 49, I kicked things off with a straight cut. For this cigar, I used my Credo Special T cutter with the 36 ring gauge hole to get an ideal cut. This allowed me to get a smaller ring gauge cut and to take advantage of the tapering near the cap of the cigar. From that point, I moved on to the pre-light draw. The cold draw delivered a mix of sweet natural tobacco, floral, and cedar notes. I considered this to be a very good pre-light draw. At this point, I was ready to toast up my Kristoff TAA Exclusive 49 cigar and await what  the smoking phase would have in store.

The Kristoff TAA Exclusive 49 started out with notes of sweet natural tobacco, cream, wood, and some touches of black pepper. Early on, a fusion developed between the cream and wood notes, creating a nice smooth texture on the flavor profile. The natural tobacco, wood, and cream notes moved to the forefront early on. The black pepper became a secondary note, but could also be detected on the retro-hale.

During the second third of the Kristoff TAA Exclusive 49, I found the cream/wood combination took control as the main primary note. The natural tobacco notes settled in the background. It was also during this period that there was a gradual increase in the black pepper on both the retro-hale and the tongue.

By the last third, the natural tobacco sweetness seemed to kick up a little more. The cream/wood combination remained in the forefront. While there was more in the way of the pepper spice by this point, the cigar never became overpowering This is the way the Kristoff TAA Exclusivc 49 came to a close. The resulting nub was cool in temperature and slightly soft to the touch.

In terms of the burn, I did find the Kristoff TAA Exclusive 49 needed some touch-ups along the way to maintain a straight burn path and a relatively straight burn line. While some touch-ups were needed, I didn’t find the amount to be excessive. The resulting ash had a silver-gray color. This was an ash that wasn’t overly firm, but it wasn’t loose or flaky either. The burn rate and burn temperature were both ideal throughout the smoking experience. 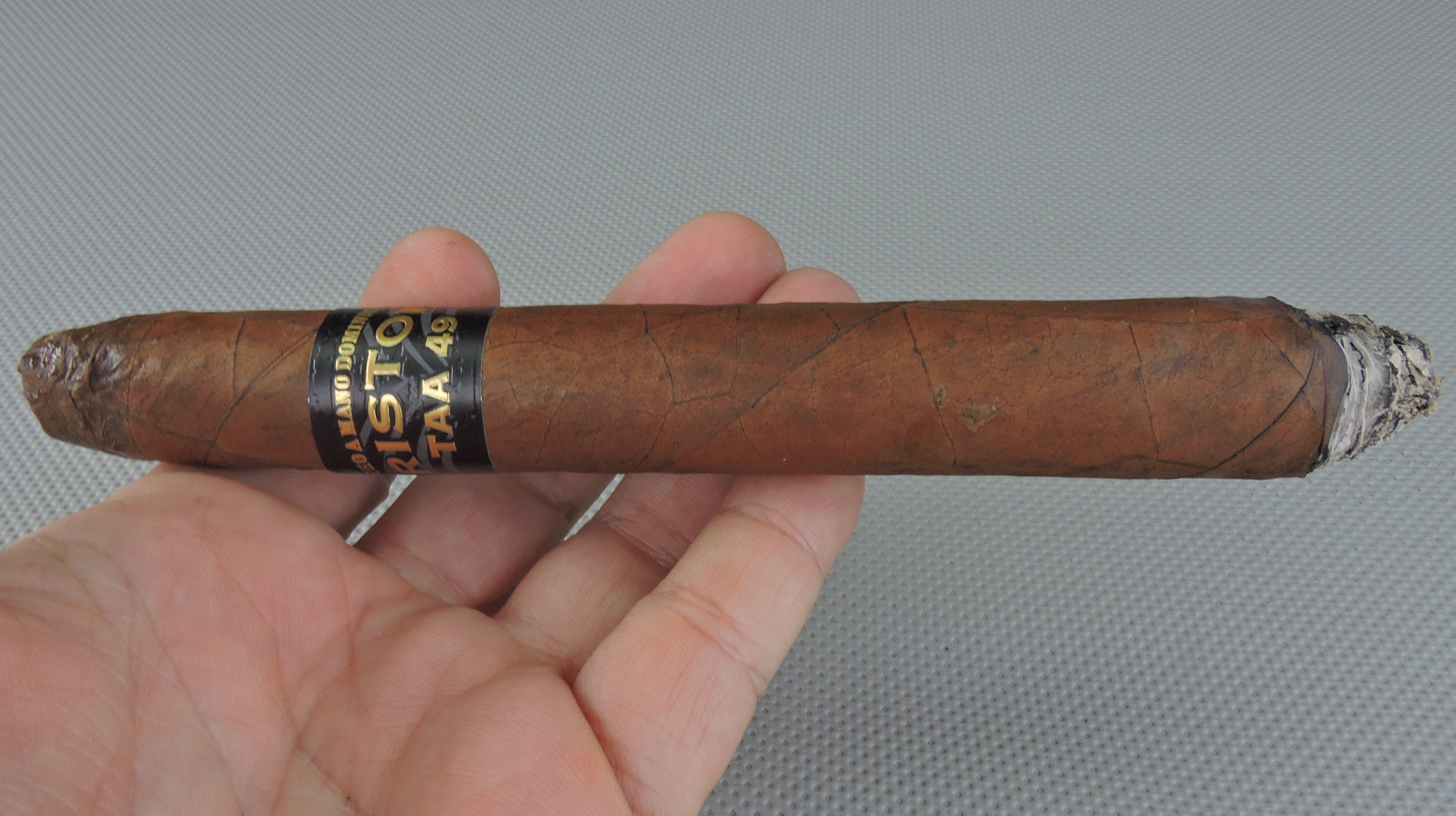 Burn of the Kristoff TAA Exclusive 49

For a salomon, I found the Kristoff TAA Exclusive 49  to have an excellent draw. The resistance level was at a sweet spot in that there was enough openness to derive flavors, and enough resistance to keep the cigar burning at an ideal level.

When I looked at the wrapper of this cigar, I was expecting the Kristoff TAA Exclusive 49 to be a pretty bold cigar, however, this was not the case. The Kristoff TAA Exclusive 49 delivered a medium strength, medium-bodied smoke from start to finish. While there was a slight increase in the intensity levels along the way, I still found the cigar remained in the medium range of the spectrum. The strength and body levels also seemed to mesh very well with the flavors produced

In terms of strength versus body, I found both attributes balanced each other nicely – with neither one overshadowing the other.

The Kristoff TAA Exclusive 49 went against the grain with me in a lot of ways – and in the end that was a good thing.

If you have followed many of the TAA cigar reviews I have done on Cigar Coop, there is a recurring theme – namely that many of the cigars being made available to the TAA by manufacturers fall quite short of expectations. With the Kristoff TAA Exclusive 49, this is not the case. While it isn’t the most complex of cigars I have had, it excels in the category that is the most important – flavor. While natural tobacco, cream, and wood are not always the most exciting flavor notes, somehow they came together nicely with this blend. In general, I’m also not the biggest fan of large salomon vitolas, but I found this format worked quite well with this blend.  This is a cigar that I could recommend to any cigar enthusiast any time of the day. While I normally wouldn’t recommend a salomon to a newbie, there is no reason why I wouldn’t recommend this particular one. This is an excellent cigar and even at $11.00 per cigar, it’s one that I can easily recommend a box purchase for a ten-count box.