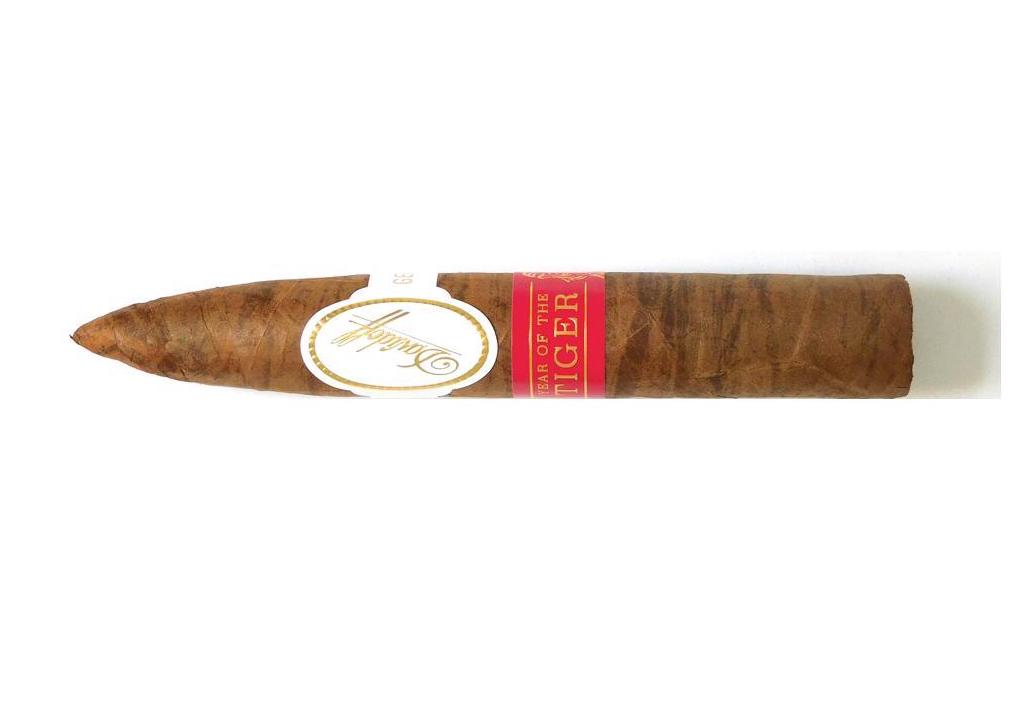 Davidoff Year of the Tiger

Late in 2021, Davidoff released the 11th installment of its Chinese Zodiac series, the Davidoff Year of the Dog Tiger. This annual ultra-premium series is one that is highly anticipated by Davidoff cigar enthusiasts. While the start of the Chinese New Year falls in between January 21st and February 20th, Davidoff typically puts out the Zodiac release around Thanksgiving in the prior calendar year. Each installment features a different blend, in a different size, with exquisite packaging reflecting the Zodiac theme. Perhaps one of the most eye-catching releases of the series has been the Davidoff Year of the Tiger.

While we normally go into appearance as one of the components of the assessment, it’s impossible to ignore this in the preamble.  The fur of the stripes of the tiger is represented on the cigar band and remarkably that is done by a natural process.

Assuming Davidoff continues to complete the cycle through the Chinese Zodiac, the next release, 2023’s Year of the Rabbit, would bring the cycle to a close. It’s not clear what Davidoff’s plans are following the Rabbit release.

While Davidoff is the first company to launch a Chinese New Year Series, several other companies have released their interpretations of the Chinese New Year. For the Year of the Tiger, there have been releases by not only Davidoff, but Maya Selva Cigars, Plasencia, General, Drew Estate, and VegaFina.

Without further ado, let’s break down the Davidoff Year of the Tiger and see what this cigar brings to the table.

The blend features an Ecuadorian Connecticut wrapper over a Dominican Hybrid 257 Seco binder, and a combination of Dominican tobaccos (Piloto, San Vincente, Hybrid 254, and Hybrid 259) for the filler.

The Davidoff Year of the Tiger is offered in one size – a 52 x 5 Piramide. It’s the first time a figurado is being used on a Davidoff Chinese New Year since 2015’s Davidoff Year of the Sheep. The cigars are packaged in ten-count boxes with a total production of 17,350 boxes worldwide.

The wrapper to the Davidoff Year of the Tiger is stunning. It has a light brown color with a darker brown color representing tiger fur. It has a very natural look to it, and it’s easy to see why Davidoff has a growing reputation for innovation. There are a few visible veins and the wrapper seams are well hidden. The Piramide shape has a long, gentle taper effect converging at the had of the cigar.

The second band is primarily red with gold font and gold adornments. On the center of the band is the text “YEAR OF THE TIGER” with “TIGER” in a larger font.

On the box, the tiger stripe pattern was also used: 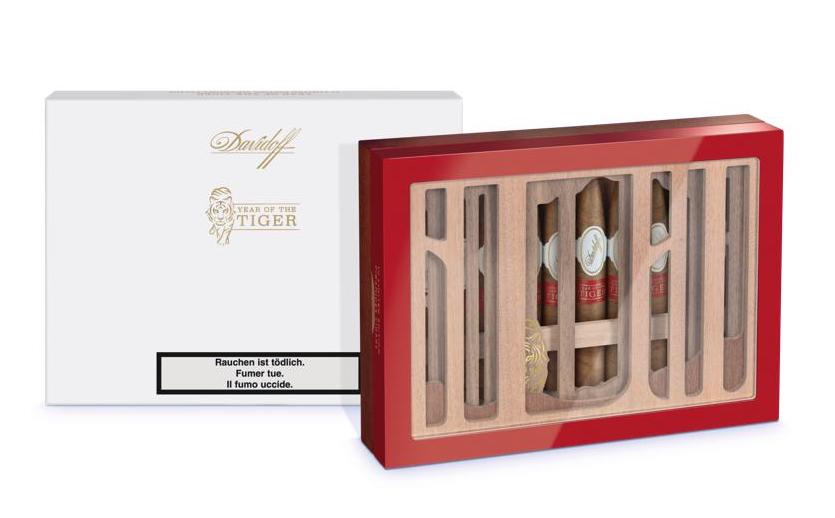 Packaging for the Davidoff Year of the Tiger; Photo Credit: Oettinger Davidoff AG

A straight cut was used to cut the tip of the Davidoff Year of the Tiger. I opted to go about 2/3 down the taper with the cut to try to maximize the area for the draw. The cold draw delivered notes of cream, wood, and a slight cedar note. this wasn’t the most exciting pre-light draw. Since the pre-light draw is not scored, there was no loss of points here. At this point, it was time to toast up the Davidoff Year of the Tiger and see what the smoking phase would have in store.

By the last third, the wood notes transitioned to cedar notes. The natural tobacco settled into the background with the mushroom and black pepper notes. The black pepper became the most prominent background note. The cream notes present early on had dissipated. The bitter component now bordered on delivering some harshness. This is the way the Davidoff Year of the Tiger came to a close. The resulting nub was soft to the touch and cool in temperature.

The Davidoff Year of the Tiger produced an excellent burn. It had no trouble maintaining a straight burn path and a relatively straight burn line. The resulting ash wasn’t overly firm, but it wasn’t loose or flaky either. Both the burn rate and burn temperature were ideal. 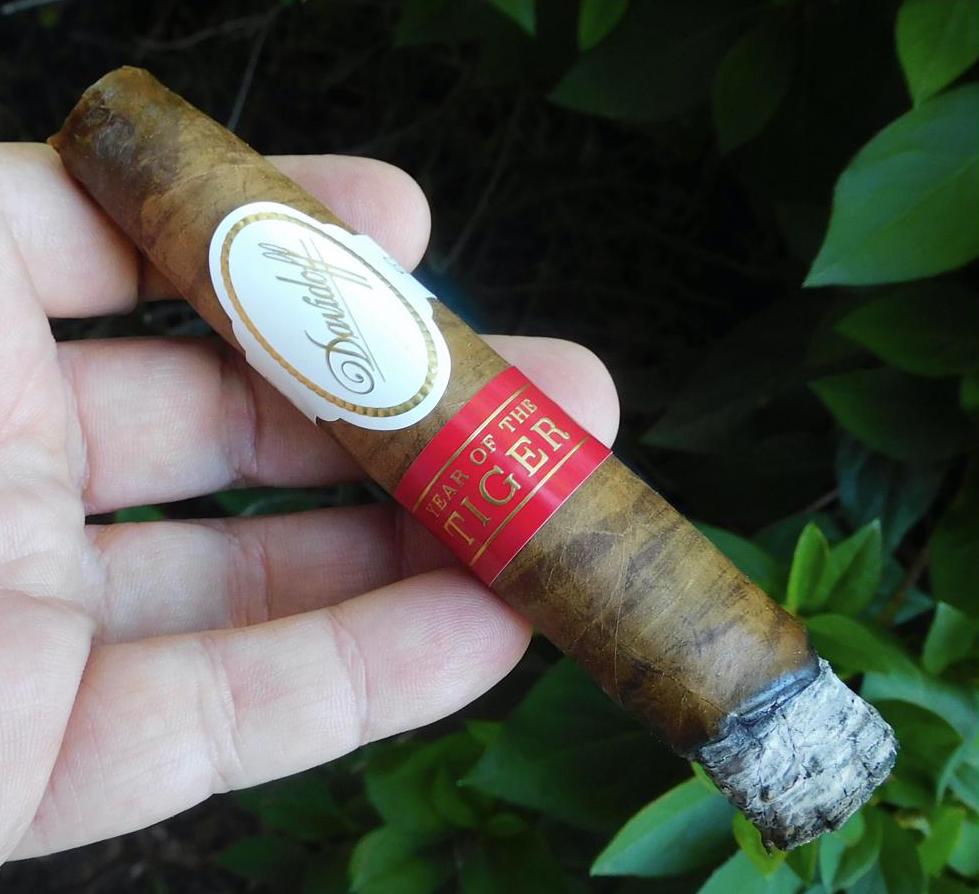 Burn of the Davidoff Year of the Tiger

The draw to the Davidoff Year of the Tiger was on the snug side. The cigar was very much smokeable. While I prefer a little more resistance, there was more on this cigar than I prefer.

As I mentioned, the Davidoff Year of the Tiger is as impressive looking a cigar as I have seen. However, much like we don’t score pre-light draw, appearance is not scored for a review. Over the years, the Davidoff Chinese Zodiac series has delivered some impressive cigars. Unfortunately, one cigar has to rank at the bottom of any series. In the case of the Davidoff Year of the Tiger, it is the cigar that ranks last in my book. I found this cigar to have flavors with no wow factor. While sometimes bitterness is good, in the case of the Year of the Tiger, it threw the balance of the cigar off. Add to the fact this is a $42.00 cigar, it leads me to conclude that I wouldn’t want to revisit this cigar again. On a side note, I would love to see Davidoff use the technique for creating the “tiger fur” on future cigars, but hopefully with a different blend.