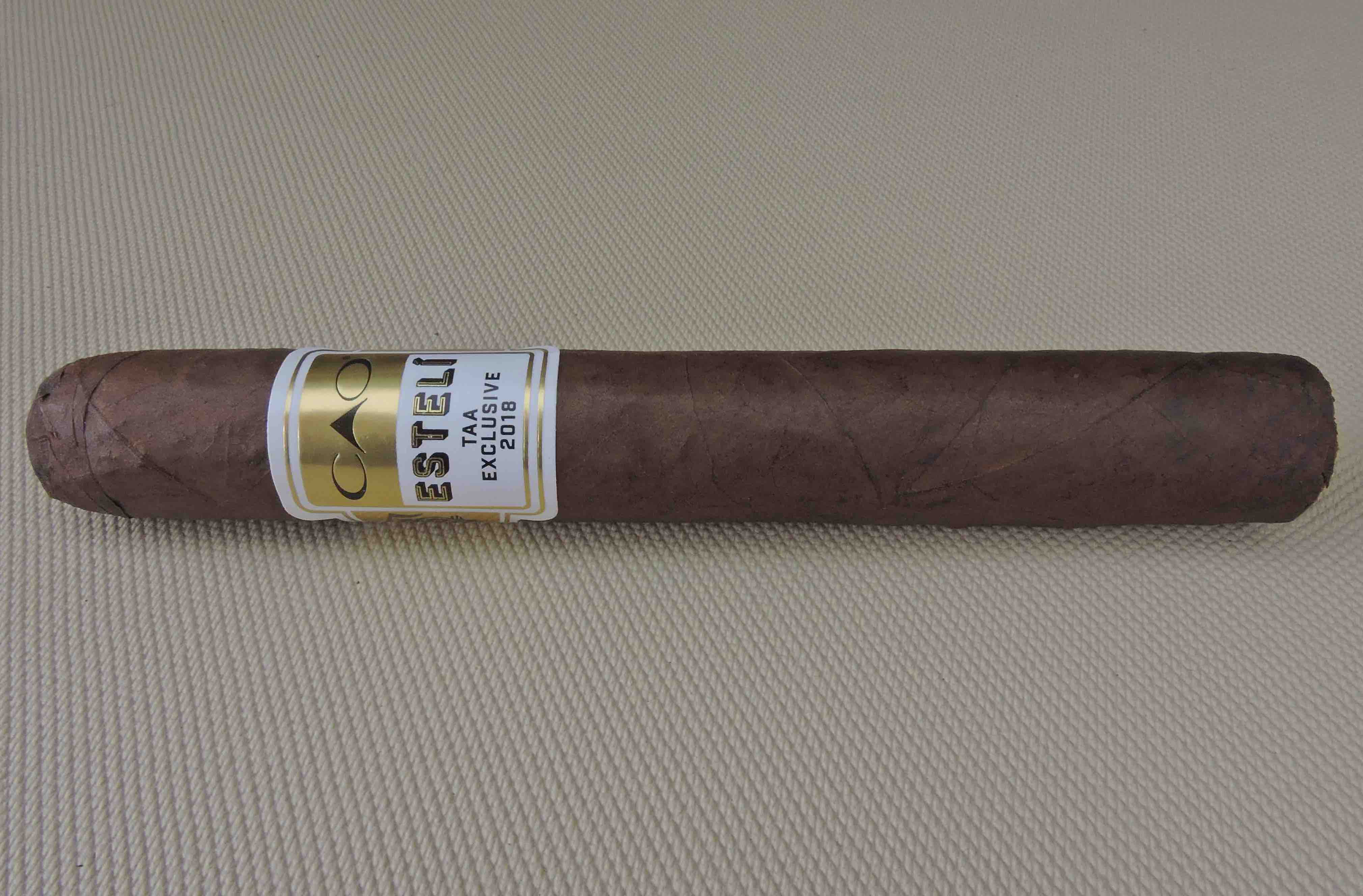 The CAO brand is one that has been around for well over two decades. While it is now a brand under General Cigar’s portfolio, it had never produced an exclusive cigar for the Tobacconist Association of America (TAA). That changed in 2018 with the release of the CAO Estelí as a part of the 2018 TAA Exclusive Series of Cigars. CAO Estelí was one of three cigars released as a part of CAO’s Pan American Tour promotional campaign. The other two cigars in the series included the limited edition CAO Zócalo (a nod to Mexico as it featured CAO’s first release with a Mexican wrapper) and the regular production CAO Nicaragua (which made its debut at the 2018 IPCPR Trade Show). Today, we take a closer look at the CAO Estelí).

While CAO Estelí was the first release by CAO for the TAA, General Cigar has already announced a second cigar that would be a part of the 2019 TAA Exclusive Series, the CAO Brazilia Select.

Without further ado, let’s break down the CAO Estelí and see what this cigar brings to the table.

The CAO Estelí was made available in one size – a 6 x 54 Toro. The cigars were presented in ten-count boxes with a total production of 1,500 boxes made available to TAA retailers.

The Jalapa grown wrapper of the CAO Estelí had a milk chocolate brown color to it. The wrapper itself had an oily complexion. This was a wrapper on the smoother side. There were some thin visible veins, but the wrapper seams were well hidden.

Prior to lighting up the CAO Estelí, a straight cut was used to remove the cap. After removing the cap, it was on to pre-light draw tasting. The cold draw delivered satisfying earth, berry, and a slight amount of spice. At this point, it was time to light up the CAO Estelí and see what the smoking phase would have in store.

The CAO Estelí kicked off with notes of chocolate, nut, berry, earth, and red pepper. There was no dominant note during the early phases. The chocolate, nut, and pepper eventually surfaced as the primary note with the earth and berry notes second. The pepper diminished into the background leaving the nut and chocolate notes primary. Meanwhile, the retro-hale produced a combination of mixed pepper with some berry sweetness mixed in.

During the second third of the CAO Estelí, the nut and chocolate notes remained primary. During this phase, there was a gradual increase in the pepper on the tongue. The red pepper notes present early on morphed into a black pepper varietal. In between the one third and midway point, the berry sweetness occasionally surfaced in the forefront. Just past the midway point, the berry notes grounded themselves in the background and the earth notes dissipated.

While the chocolate and nut remained primary during the last third, the pepper notes were now a close secondary note. By this point, the pepper notes leveled off and no longer increased in intensity. The berry notes now were more distant. This is the way the CAO Estelí finished up. The resulting nub was slightly soft to the touch but cool in temperature.

While the burn of the CAO Estelí started out relatively straight, as the cigar went on, this was a burn that became more jagged along the way. As a result, this was a cigar that needed touch-ups along the way. While the touch-ups did the trick, the cigar required more touch-ups than I would expect. The burn temperature remained ideal. In general I found the CAO Estelí  burn rate to be slow (one of the samples took 2 hours to smoke). 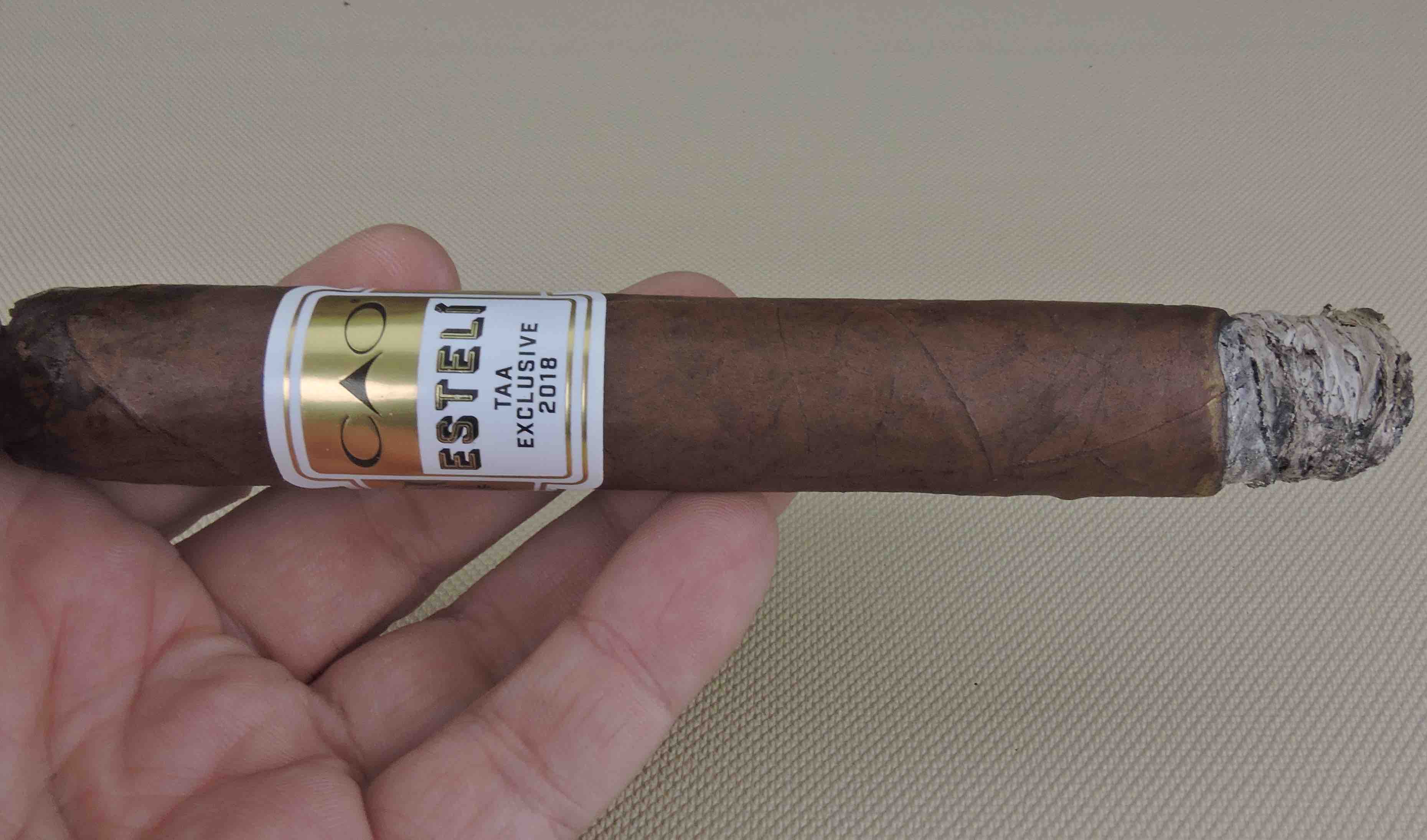 Burn of the CAO Estelí

The draw to the CAO Estelí proved to be a little snug. A couple of the samples did require a re-light along the way. It also could be the reason why the cigar had a slower burn rate.

The CAO Estelí started out as a medium strength, medium to full-bodied cigar. Both attributes had an increase in intensity in the second half and by the last third, this was a cigar that was medium to full in strength and full in body. The retro-hale played a key role in the depth of the flavors delivered.

With the CAO Estelí, the best part of this cigar was the first third. The remaining two-thirds still produced some very nice flavors. In terms of burn and draw, while they were satisfactory in terms of performance, they weren’t “excellent”, so there was a slight loss of points here. This is a cigar I would position to a more seasoned cigar enthusiast. As for myself, this is a cigar I would purchase again. However as I have said with the TAA Exclusive Cigars, I was still expecting more in the performance category for a TAA cigar.