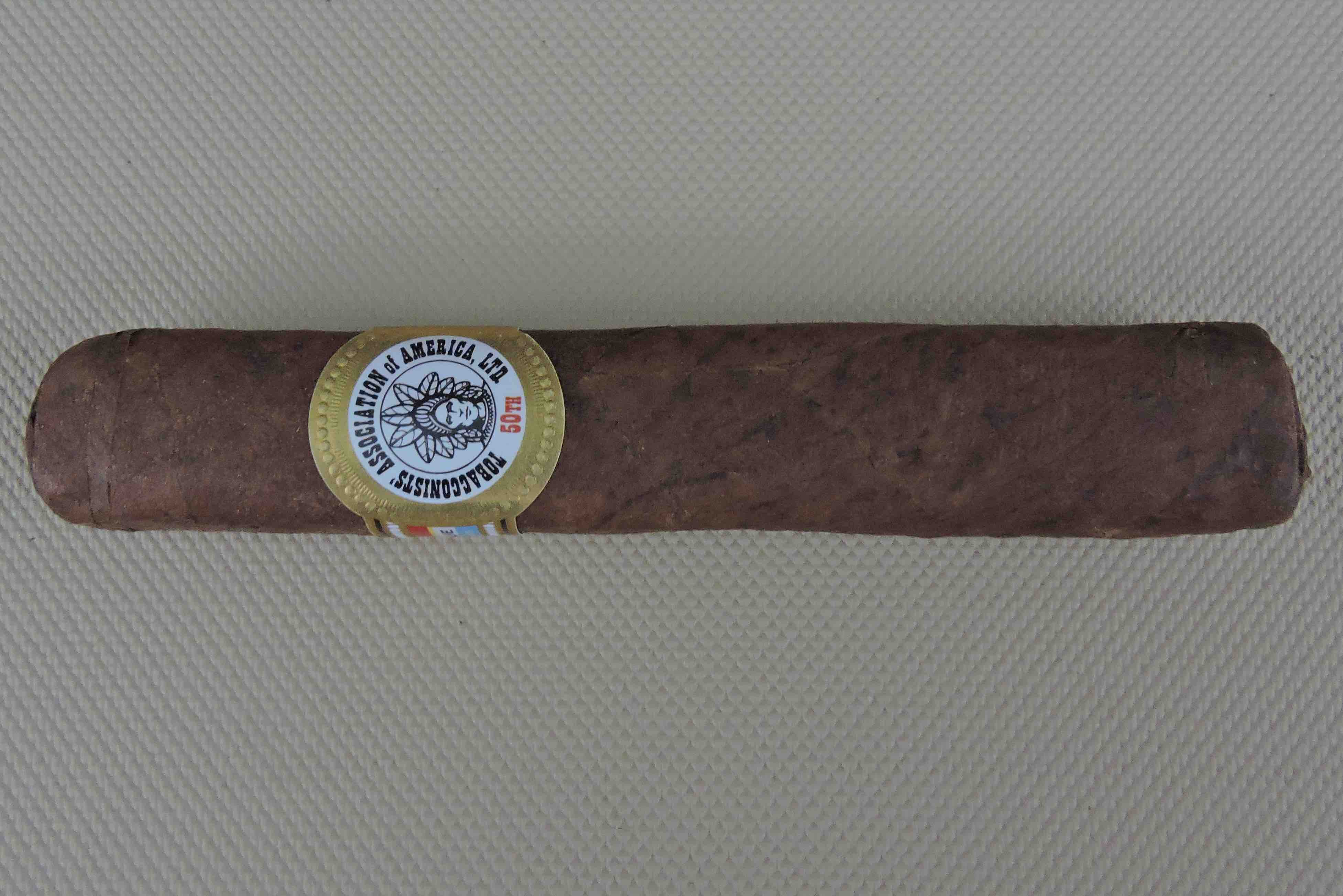 In 2018, Tatuaje Cigars released its eighth consecutive installment to the Tobacconist Association of America (TAA) Exclusive Series. The TAA Exclusive Series is a series of cigars produced by leading manufacturers that are exclusively sold at TAA retail establishments. It’s hard to believe that it was back in 2011 that Tatuaje released its first cigar to the TAA. Since then, it has been a mainstay of the series and has been credited to leading to the vast expansion of the series. In previous installments, the Tatuaje TAA release was named for the year of the release, but with 2018 being the 50th anniversary of the TAA, the release is being called the Tatuaje TAA 50th. It marks the first time a Tatuaje TAA release will come in 5 x 52 format. Today we take a closer look at this cigar.

Since 2018 was the 50th anniversary of the Tobacconist Association of America, there was a large number of releases as a part of the 2018 TAA Exclusive Series.

Without further ado, let’s break down the Tatuaje TAA 50th and see what this cigar brings to the table:

With the exception of the Tatuaje TAA 2013 and recently announced Tatuaje TAA 51st, all of the other installments have utilized a Connecticut Broadleaf wrapper over Nicaraguan binder and filler.

The Tatuaje TAA 50th was offered in one size – a 5 x 52 box-pressed Robusto. As mentioned, this is the first time Tatuaje has used this vitola size and shape in the TAA Exclusive Series. The cigars are sold in 20-count cabinet boxes. A total production of 2,500 boxes has been made – one of the largest allocations of a TAA release to date.

The Connecticut Broadleaf Rosado Oscuro wrapper of the Tatuaje TAA 50th lived up to its name. The roasted coffee bean color contributed to the “oscuro” portion with a slight dark rosado hue mixed in. There wasn’t much in the way of oil on the wrapper and there was a slight ruggedness to it. While there were some thin visible veins, the darker color of the wrapper did a good job at hiding the wrapper seams. The box press had a slight soft Cuban-press style. As with the other Tatuaje TAA Broadleaf releases, the TAA 50th featured a covered footer.

The band itself is a variation of the bands that Tatuaje uses for many of its “Exclusive Series” (i.e. limited, retailer-exclusive) releases. It features the red, white, and sky blue stripes found on those bands. There are also gold and black stripes across the top and bottom. On the white stripe, it says “TATUAJE” on both the left and right side in black font. On the blue stripe, it says “TAA EXCLUSIVE” in white font. On the front of the band is the TAA Indian logo in black. Around the logo, it says “TOBACCONISTS’ ASSOCIATION of AMERICA, LTD” in black font arranged in a circular fashion. Below the logo is the text “50th” in red font. A gold ring surrounds the logo and text on the front.

The cigar experience of the Tatuaje TAA 50th commenced with a straight cut. After removing the cap, it was time to proceed with the pre-light draw. The dry draw delivered a mix of earth and some natural tobacco sweetness. I’d say the pre-light draw was satisfactory. At this point, it was time to light up the Tatuaje TAA 50th and move on to the smoking phase.

The Tatuaje TAA 50th started out with a mix of coffee, sweet natural tobacco, earth, and red pepper notes. During the early stages of the smoking experience, coffee and natural tobacco notes developed a fusion. The pepper and earth notes moved into the background. During the first half, while I wouldn’t say there was a creamy texture to the smoking experience, there was somewhat of an underlying smoothness. Meanwhile, the retro-hale delivers a mix of additional red pepper notes and cedar.

Toward the end of the first third, the coffee and natural tobacco maintained its fusion, but some of the sweetness that had been present early on dissipated. The earth and red pepper notes remained in the background. Toward the halfway point a mineral note also surfaced in the background.

Later in the second third of the Tatuaje TAA 50th, the fusion of the coffee and natural tobacco broke apart. The coffee notes remained in the forefront. The earth notes also progressed into the forefront while the natural tobacco receded into the background with the pepper and mineral notes. By this point, the smoothness that was present early on had dissipated.

The final third of the Tatuaje TAA 50th saw the coffee notes develop more richness. The earth notes also remained in the forefront with the pepper, mineral, and natural tobacco in the background. This is the way the Tatuaje TAA 50th came to a close. The resulting nub was firm to the touch and cool in temperature.

While the Tatuaje TAA 50th had a slightly wavy-burn line, the Tatuaje TAA 50th maintained a straight burn path and didn’t require much more in the way of additional touch-ups. The resulting ash was a silvery-gray. This was an ash that was skewed toward the firmer side. Meanwhile, the burn rate and burn temperature were ideal. 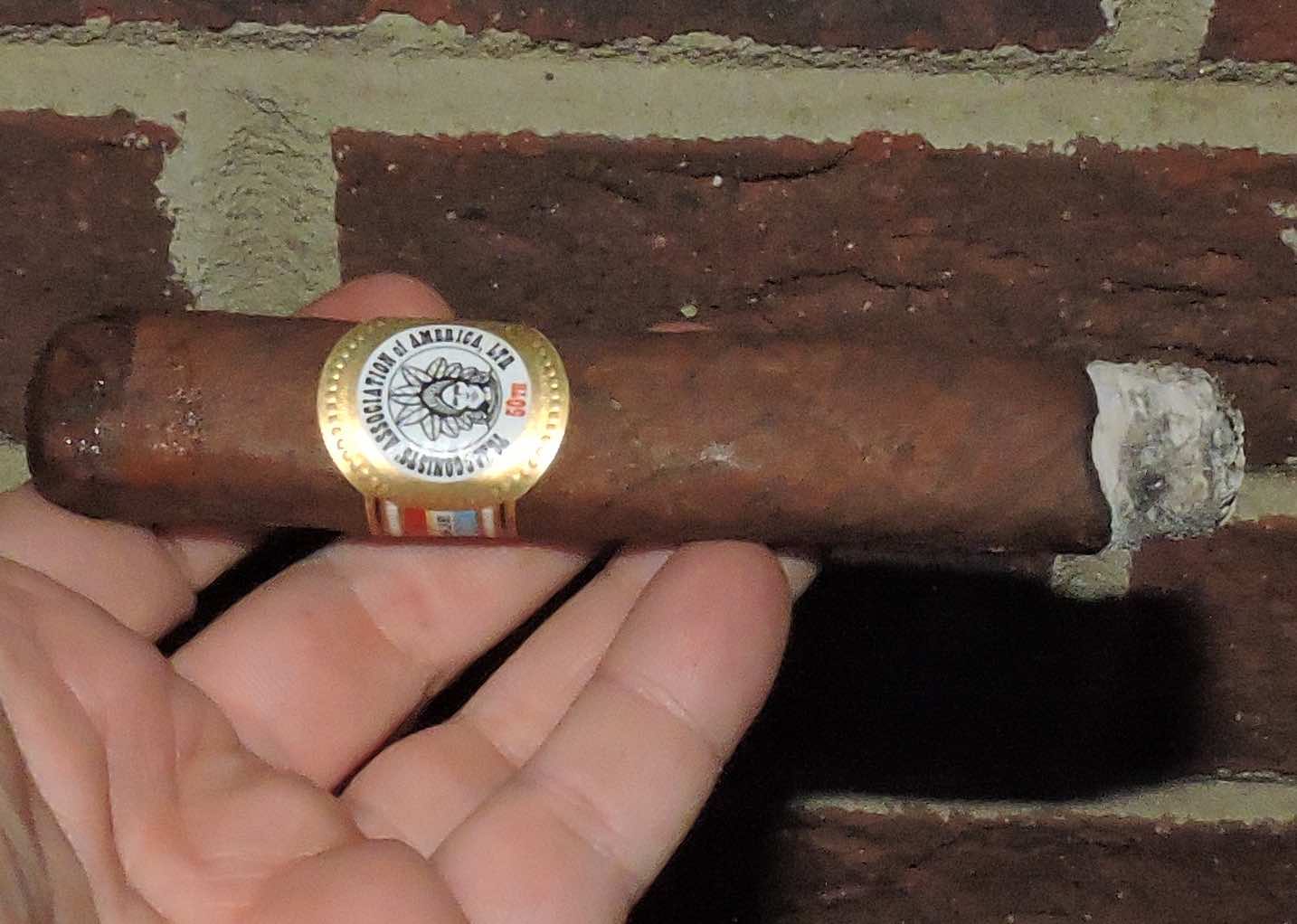 Burn of the Tatuaje TAA 50th

In terms of a draw, the Tatuaje TAA 50th had as good of a draw as I have had on any box-press cigar. This cigar had the a touch of resistance at just the perfect level for me. Overall this draw earned our highest assessment level – exceptional.

In terms of strength and body, the Tatuaje TAA 50th is not going to be a powerhouse, but will have enough depth to satisfy most cigar enthusiasts. This cigar delivered a medium strength and medium to full-bodied smoking experience from start to finish. There was a slight increase in intensity levels for both attributes, but overall there wasn’t a lot of variance of the levels.

When it came to strength versus body, the body had the edge throughout the smoking experience.