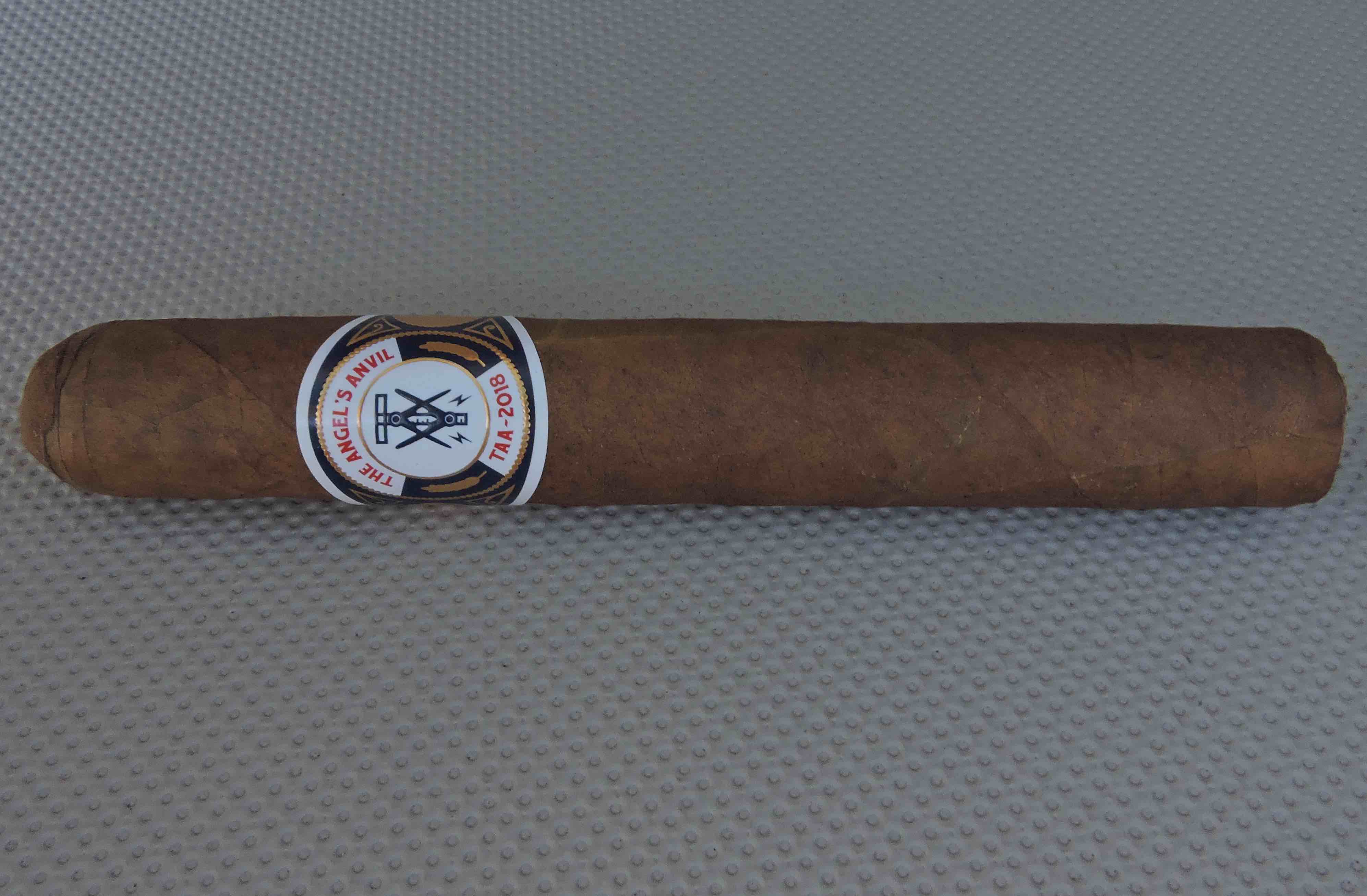 The Angel’s Anvil 2018 marks the fifth consecutive year that Crowned Heads Cigars has provided an exclusive release for the Tobacconist Association of America (TAA) retailers. One can make the argument that over the past five years, Crowned Heads along with La Flor Dominicana and Tatuaje have been the most consistent and popular TAA releases. As it has done for the previous four installments, Crowned Heads teams up with long-time partner Ernesto Perez-Carrillo Jr. at Tabacalera La Alianza to produce The Angel’s Anvil 2018. Today we take a closer look at this 2018 installment.

For 2018, the following are new installments for the 2018 TAA Exclusive Series:

As mentioned above, this is the fifth consecutive year (and fifth time overall) that Crowned Heads has released a TAA Exclusive cigar. At press time, there have been no announcements of a 2019 edition.

Without further ado, let’s break down the Crowned Heads The Angel’s Anvil 2018 and see what this cigar brings to the table.

For the first time in The Angel’s Anvil series, the wrapper used is an Ecuadorian Sumatra wrapper. This is a wrapper that often associated with Ernesto Perez-Carrillo Jr.  The remainder of the blend consists of all Nicaraguan tobaccos.

The Ecuadorian Sumatra wrapper of The Angel’s Anvil 2018 had a medium brown color with a caramel tint to it. There was a light amount of mottling on the wrapper. The surface of the wrapper was on the smoother side and did not have much oil on it. There were some visible veins on the thin side, and the wrapper seams were minimally visible.

The band to the Crowned Heads Angel’s Anvil 2018 is similar to previous editions, but with a different color scheme. The band itself has a white and blue background. At the center of the band is the blue Angel’s Anvil logo consisting of a blue “T” along with two interlocking letter A’s sitting on a white background inside a gold circle. There is an outer ring surrounding that circle in gold with some arc-shaped segments. The first segment is on the upper part of the ring and says “THE ANGEL’S ANVIL” in red font – arranged in a curved fashion on a white background. Going clockwise is a blue colored segment with a gold adornment; toward the bottom is the text “TAA-2018” arranged in a curved fashion in red font on a white background, and finally, there is another blue colored segment with a gold adornment. To the left and right of the circular pattern are gold medallions and gold adornments on a blue background.

A straight cut was used to remove the cap of The Angel’s Anvil 2018. Once the cap was removed, it was time to commence with the pre-light draw. The dry draw delivered a mix of natural tobacco balanced out nicely with both sweet and slightly bitter notes. There was also a subtle woody note and a touch of spice. I deemed this to be a satisfactory pre-light draw. At this point, it was time to light up The Angel’s Anvil 2018 and see what this cigar would bring to the table.

The Angel’s Anvil 2018 started out with notes of classic wood, cedar, black pepper, and natural tobacco. The initial stages saw the pepper and cedar spice more prominent. This would give way to the wood and natural tobacco notes. The pepper and cedar settled in the background and were joined by a subtle dried fruit note. Meanwhile the black pepper, wood, and cedar were all prominent in the background.

As The Angel’s Anvil 2018 reached the latter part of the first third, the dried fruit note increased in intensity. By the second third, while the wood and natural tobacco remained in the forefront, there were times the dried fruit would make an appearance there.

Later in the second half, the natural tobacco notes took over as the primary note. The wood, dried fruit, pepper, and cedar still remained in the background. The flavor profile of The Angel’s Anvil 2018 remained like this until the close of the smoking experience. At the end of the cigar experience, the nub was slightly lukewarm in temperature and soft to the touch.

For the most part, The Angel’s Anvil 2018 maintained a straight burn path and a straight burn line. There were some touch-ups needed along the way. While this wasn’t a “set it and forget it” burn, it didn’t prove to be problemsome either. The resulting ash was skewed toward the firmer side. The ash had a salt and pepper color complexion. As for the burn rate, this was pretty much ideal. The burn temperature remained ideal, but in the final stages, it got slightly warmer than I prefer. 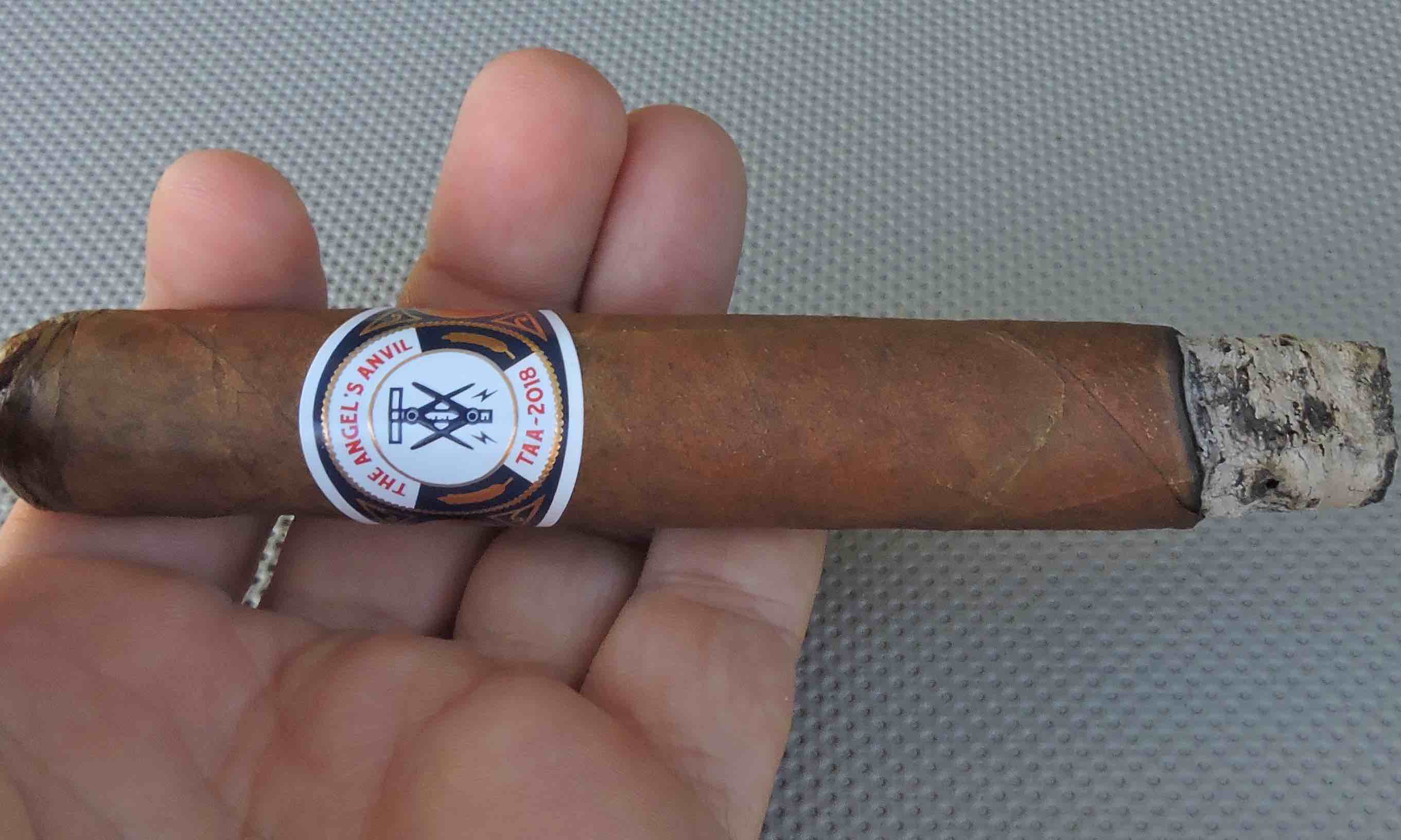 There was a slight amount of resistance on the draw of The Angel’s Anvil 2018. This is something that I considered ideal and made for a better smoking experience. At the same time, this was a draw that was low maintenance to derive flavor from.

As mentioned above, I consider three companies to have stood above the others when it comes to the TAA Exclusive releases: Tatuaje, La Flor Dominicana, and Crowned Heads. In particular, I have found The Angel’s Anvil 2015, 2016, and 2017 releases have shined. I think The Angel’s Anvil 2018 fell a notch below these releases. This shouldn’t be considered a total negative. On its own, The Angel’s Anvil 2018 edition is a very good cigar, but it’s just up against some stiff competition with those other releases. It’s certainly a cigar I could recommend to a novice or experienced cigar enthusiast. As for myself, it’s certainly a cigar I buy one and smoke again.