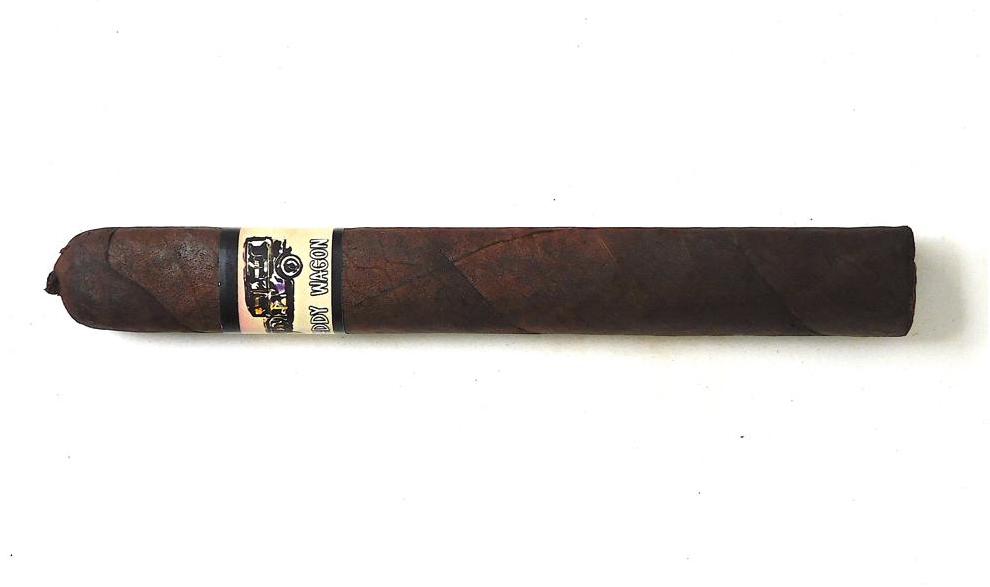 When the Protocol Paddy Wagon was initially announced, company co-founder Juan Cancel gave some background on the connection of Paddy Wagon to Caravan Cigar Company: “When we do projects with shops we try our best to personalize that project to that specific shop. We do this to totally immerse the shop and its spirit into the project. Here the Shop is called Caravan Cigar Company because the company started doing mobile cigar events at fairs out of the back of the family Caravan. We looked at the concept of a Caravan and tried to see how we could relate it to the law enforcement world. That’s how The Paddy Wagon was born.” 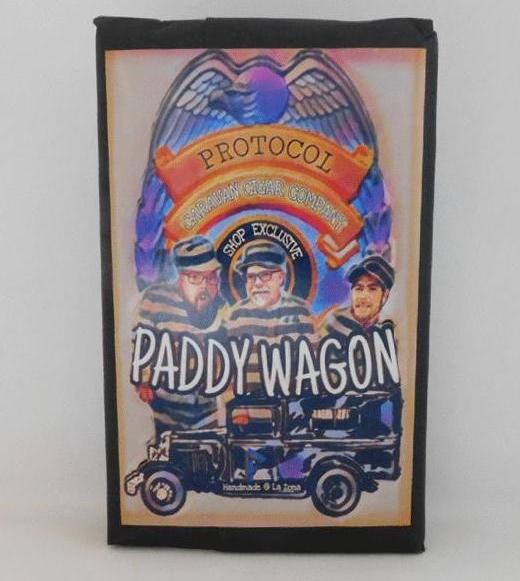 Packaging of the Protocol Paddy Wagon

Over the past couple of years, Protocol Cigars has definitely ramped up on its limited editions – whether single-store one-time releases, single-store ongoing releases, or event cigars. At press time, there have been 15 of these releases, including three in 2021 and a fourth one announced for this summer

Without further ado, let’s break down the Protocol Paddy Wagon and see what this cigar brings to the table.

The Protocol Paddy Wagon consists of a Mexican San Andres Maduro wrapper over Nicaraguan binder and filler. As with all Protocol Cigars, production is handled at the La Zona and blended by Hector Alfonso Sr.

The Mexican San Andres wrapper of the Protocol Paddy Wagon had a dark espresso color to it. There wasn’t much in the way of oil on the surface. In addition, the wrapper had a slight amount of mottling on the surface. This was a wrapper that had some thin visible veins and visible wrapper seams. There was a slight Cuban press style of this box-pressed cigar. As mentioned, the Paddy Wagon features a small tail affixed to the cap of the cigar.

The Paddy Wagon’s band has a 1970s vibe to it. It features a pewter color background with some tinted accents. On the center of the band is an image of a paddy wagon with subtle multi-colored accents. The lower part of the band has the text “PADDY WAGON” in white font with black trim. The upper and lower portions of the band also have black trim.

As opposed to pulling the pig-tail off the Protocol Paddy Wagon, a straight cut was used to remove both the tail and the cap simultaneously. From that point, it was on to the pre-light experience. The pre-light draw delivered a mix of coffee, earth, and cedar. I thought this was a satisfactory pre-light draw. At this point, it was time to light up the Protocol Paddy Wagon and see what the smoking phase would have in store.

The Protocol Paddy Wagon opened up with notes of mocha, earth, black pepper, and cedar. I use the term mocha to describe a fusion between chocolate and coffee notes. During the early phases, the mocha notes moved into the forefront. Both the chocolate and coffee components of the mocha were noticeable. Meanwhile, the earth, black pepper, and cedar settled into the background. On the retro-hale, there was an additional layer of black pepper.

The second third of the Paddy Wagon saw the mocha notes transition to a straightforward black coffee note. There was an increase in the pepper notes. Concurrently the chocolate sweetness that was present in the first third was now replaced by a dried fruit note in the second third. In the more distant background were notes of earth and cedar.

The last third saw the coffee notes remained grounded in the forefront. The pepper notes were now the most prominent of the secondary notes. In addition, there were notes of earth, fruit, and cedar rounding out the flavor profile. This is the way the Protocol Paddy Wagon came to a close. The resulting nub was soft to a touch and cool in temperature.

The Protocol Paddy Wagon is a well-constructed cigar and this reflected in the score of the burn and draw. I found the burn had no problem maintaining a straight burn path. While there was a slight curve on the burn line from time to time, the burn line still remained relatively straight. The Paddy Wagon is a cigar that did not require multiple touch-ups. The resulting ash was skewed toward the firmer side. This was an ash that had a silvery-gray color. As for the burn rate and burn temperature, both were ideal. 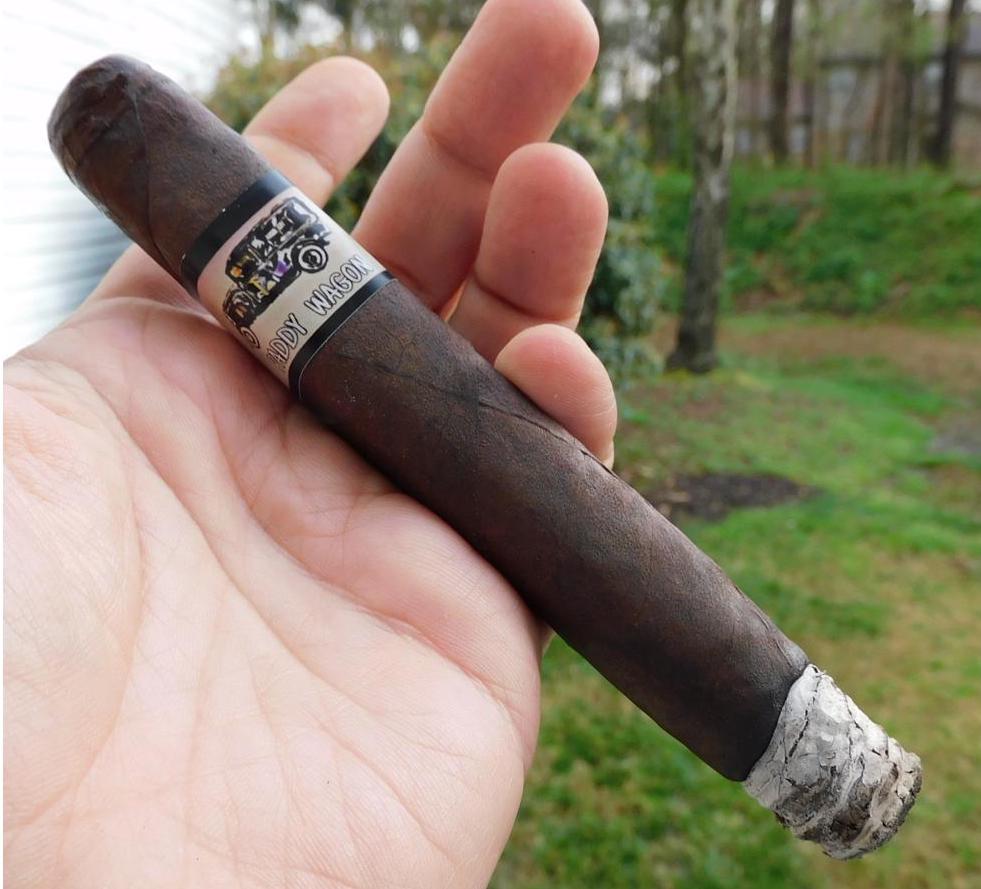 Burn of the Protocol Paddy Wagon

The draw to the Protocol Paddy Wagon also performed very well. There was enough resistance on this box press that put the draw in the sweet-spot. At the same time, this is a cigar that was low maintenance to derive flavor from.

In terms of strength, the Protocol Paddy Wagon falls into the medium range. When it came to the flavors delivered, they fall into the medium to full range. Along the way, there wasn’t much in the way of variance of strength and body. Throughout the smoking experience, the body maintained an edge over the strength.

I’ve said it many times, when it comes to a regular production portfolio of its core cigar offerings, Protocol Cigars has one of the strongest lineups. The Protocol Paddy Wagon is perhaps the best shop exclusive the company has done to date. While it is a well-constructed cigar, the Paddy Wagon scores better in a more significant category – flavor. This is a cigar I would recommend to an experienced cigar enthusiast, but I certainly would not discourage a novice from trying. As for myself, this is a cigar I would smoke again. It’s certainly one that garners box (bundle) worthy consideration. Finally, at 90 points, the Protocol Paddy Wagon reaches the threshold for the Cigar Coop Standard of Excellence.