Features of the Week

Diana Silvius, a long-time popular Chicago tobacconist who was considered a pioneer for women on the retail-side passed away last week.

Phil Zanghi and Debonaire House has entered into an agreement where Drew Estate Tobacco will distribute his Debonaire and Indian Motorcycle brands.

For Episode 172 we welcomed Abe Dababneh from Smoke Inn and Kiss My Ash Radio. We also welcomed Charles Rutherford from Boveda. Our Debonaire Ideal segment was on “Touching Up Cigars” and we had our Smokes of the Week which included:

We apologize for the production delays with Episodes 170 and 171. 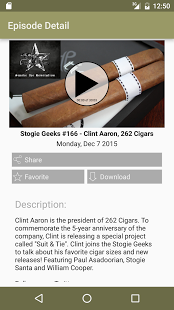 We now have our first Stogie Geeks App for the Android. Visit the Google Play store for the Video version or the Audio Version.

On this date January 30th…