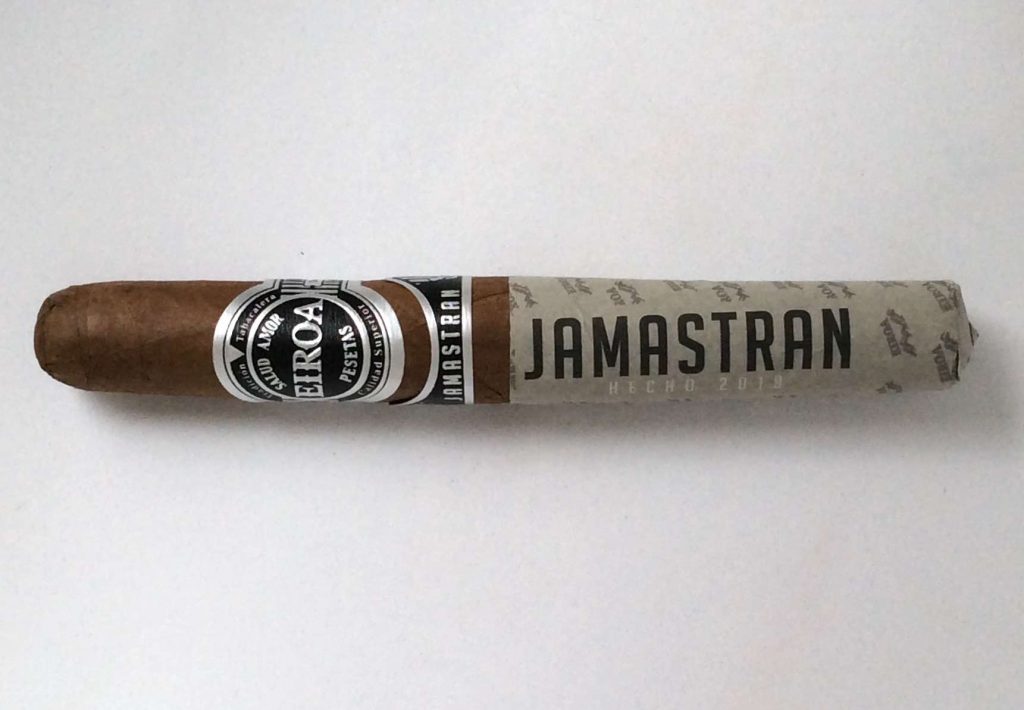 This is the fifth year C.L.E. and its brands has been a part of the TAA Exclusive Series. Each of the previous four installments has eventually become regular offerings from C.L.E. Christian Eiroa has recently said the blend is being modified for the 11/18, so its not clear what the long-term future of the Eiroa Jamastran line will be in terms of the TAA release becoming a regular production one.

Other releases have included:

Without further ado, let’s break down the Eiroa Jamastran 11/18 and see what this cigar brings to the table.

The Eiroa Jamastran is available in two sizes. The 11/18 size for the TAA. The 11/18 is a size introduced by Eiroa during his Camacho days. The vitola is a shape that is cylindrical that has tapering from both ends, but is not tapered as narrow as a perfecto or salomon. In the case of the Eiroa Jamastran 11/18 it is a 60 ring gauge at its thickest point and a 52 ring gauge at its thinnest point. The size is named for the birthday of Eiroa’s mother.

Both sizes are packaged in a trapezoid-shaped box – something that is also a throwback to the Camacho days. 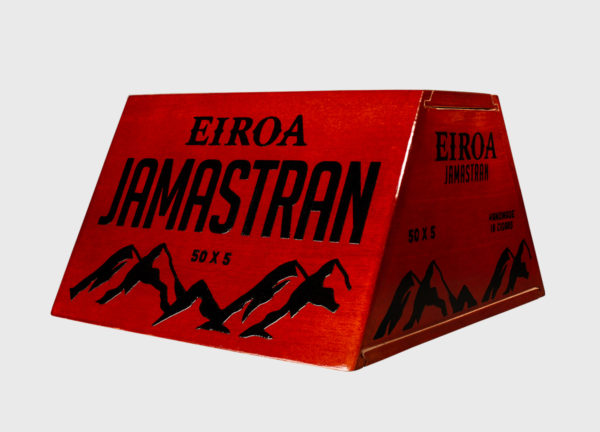 The Honduran wrapper of the Eiroa Jamastran 11/18 had a medium brown – almost woody look to it. There was a light coating of oil on the wrapper. The wrapper itself was smooth and any visible veins and wrapper seams were on the thinner side. The 11/18 size had its thickest ring toward the center of the band. 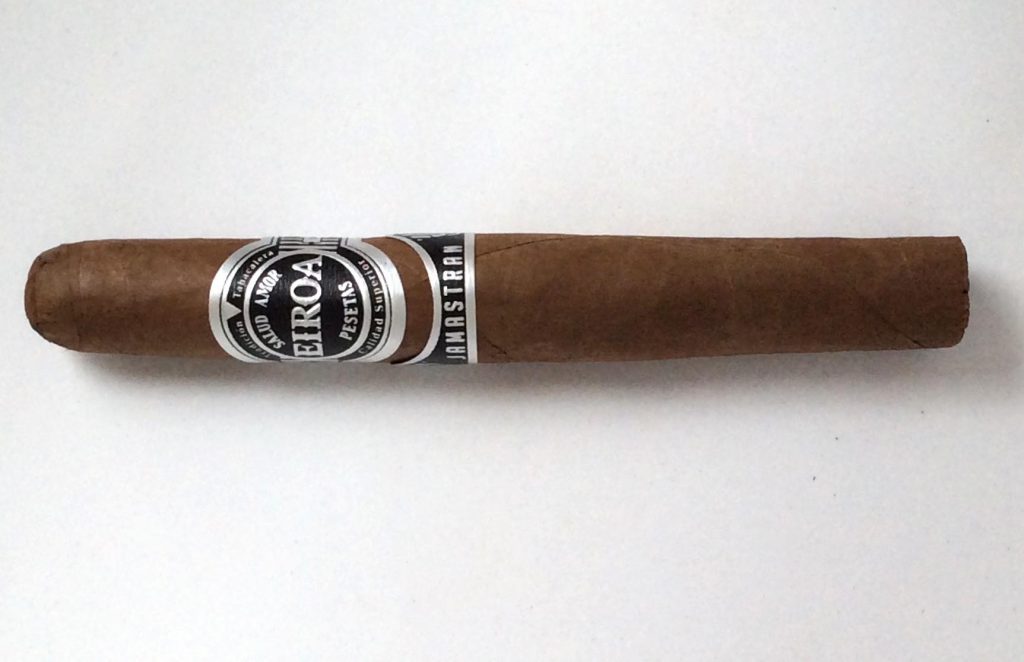 The Eiroa Dark features two bands. The primary band is a variation of the original EIROA band with a black and silver scheme. The upper part of the band has a black circle with silver trim at the center of the band. On the center of that circle is the text “EIROA” in large silver font. Surrounding the “EIROA” name are the words “SALUD,” “AMOR”, and “PESATAS” in a smaller silver font. Sitting on that background above the circle is the text “Tradicion Tabacalera” in a light font. Below it is the text “Calidad Superior” – also in light font. The left and right side of the band has silver and black vertical striping. Sitting on the left side is a silver nameplate design with the text “HECHO 2019” in black font. On the right side is another silver nameplate design with the text “DESDE 1916” etched on copper.

There is a secondary band resting just below the primary band. The secondary band has a circular wedge on the upper portion that is almost meant to interlock with the primary band. This band has a black background on the center with the text “JAMASTRAN” in silver font. There is silver and black vertical striping on the left and right side of this band. On the left side of the band is a silver nameplate design with the text “HONDURAS” in black font.

After removing the paper sleeve, a straight cut was used to commence the cigar experience of the Eiroa Jamastran 11/18. Once the cap was removed, it was on to the pre-light draw phase. The cold draw of the cigar delivered a mix of natural tobacco with both sweet and to a lesser extent bitter components. There were also black pepper notes and a touch of woody notes. I considered this to be a satisfactory pre-light draw. At this point, it was time to light up the Eiroa Jamastran 11/18 and await what the smoking phase would have in store.

The Eiroa Jamastran 11/18 started out with notes of natural tobacco, black pepper, and roasted nuts. Right out the gate, the retro-hale delivered a unique combination of black pepper and herbal notes. It didn’t take long for the natural tobacco notes to go primary. The black pepper and roasted nuts settled in the background where they were joined by some notes of sweetened molasses. While the pepper was a secondary note, it gave the Eiroa Jamastran 11/18 a nice “bite” on the tongue.

The second third started out with the natural tobacco notes still in control. Both the molasses and roasted nut flavors increased in intensity and by the midway point displaced the natural tobacco in the forefront. A woody note emerged in the background. The black pepper note remained at a constant level during the first third before increasing in intensity past the midway point.

The last third saw the roasted nut flavor still in the forefront. The molasses notes morphed into a citrus note and diminished into the background joining the natural tobacco, black pepper, and wood notes. This is the way the Eiroa Jamastran 11/18 came to a close. The resulting nub was soft to the touch and cool in temperature.

Except for a slight amount of waviness on the burn line, the Eiroa Jamastran 11/18 performed quite well on the burn. The cigar had no problems maintaining a straight burn path. The resulting ash was firm with a near-white color to it. The burn rate and burn temperature were both ideal. 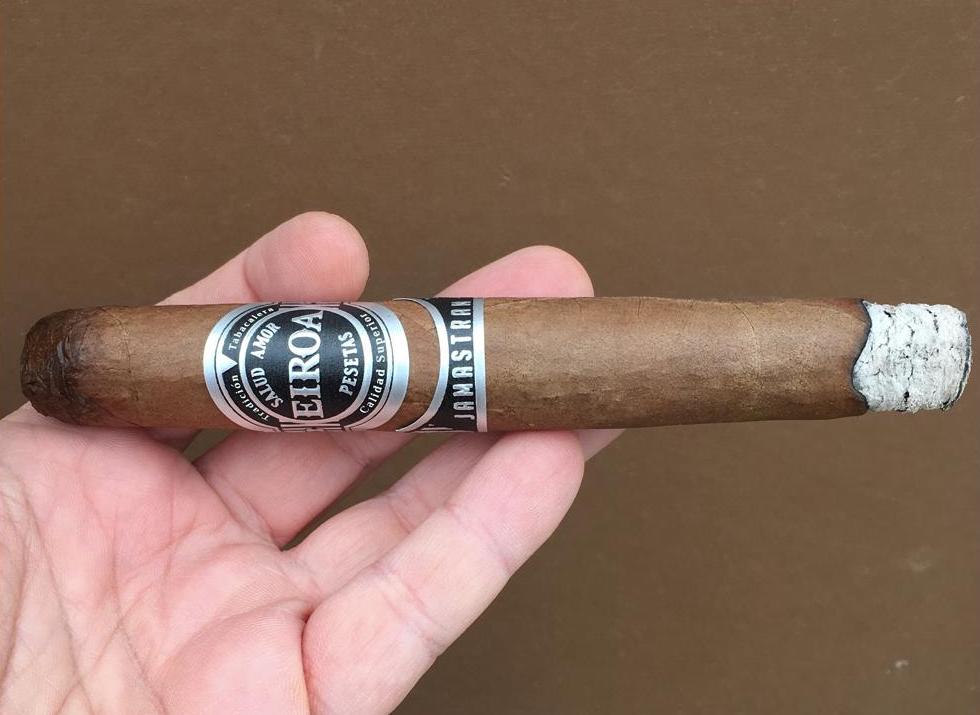 In terms of strength versus body, the body maintained an edge throughout the smoking experience.

Back when the Eiroa Jamastran was first released in 2019, my first experience with it was a bit underwhelming. However, time has been very kind to this cigar and as it underwent some aging in the Cigar Coop humidor, it got better flavorwise. In the end, I found the Eiroa Jamastran 11/18 to be a flavorful and complex cigar – and it lives up to being a bolder offering. Many times when it comes to making a specific size available to the TAA Exclusive Series, it usually is the best size in the line. With the Eiroa Jamastran, I did find the 11/18 cigar outperformed the regularly available Robusto. In the end, this is a cigar I’d steer toward the more seasoned cigar enthusiast. At $16.50, this is not an inexpensive cigar, but it’s still one I would definitely smoke again and it’s worthy of having multiples in the humidor. It’s also worthy of being a TAA Exclusive.