Agile Cigar Reviews are cigar assessments where we use a lightweight, shorter format. These will never take the place of our comprehensive reviews. They are only used on blends we have previously assessed. This might be a blend we are rescoring or giving a score for the first time. It might be a blend we are looking at in a different size. Today we look at the My Father The Judge TAA Exclusive. The Judge is a line we previously assessed in the Toro size back in May 2017. 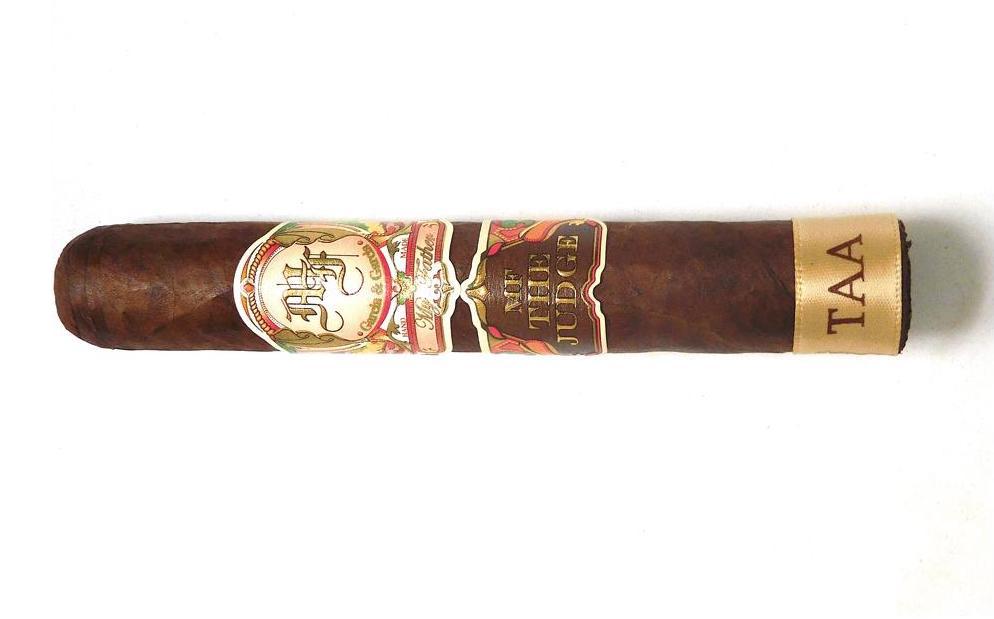 For the 2020 TAA Exclusive Series, My Father Cigars’ contribution to the collection was a 5 1/2 x 52 Robusto-sized line extension to The Judge line. The Judge is a line under the My Father brand that features an Ecuadorian Sumatra wrapper. The name The Judge was given to this cigar in honor of a family friend of the García family who happened to be a judge. The line was released in 2016 and up until this point, the line did not have a traditional Robusto offering (although there is a 5 x 60 Grand Robusto). Like most of the My Father TAA offerings, the contribution to The TAA Exclusive Series has been a special size.

The Sumatra wrapper of The Judge originates from Ecuador. Given it is on the darker side, it has an “Oscuro” designation. The remainder of the blend includes tobaccos grown on the Garcia family farms in Nicaragua. The Judge is produced at the My Father Cigars factory in Estelí, Nicaragua. The TAA Exclusive  is packaged in 23-count boxes. The TAA has reported that 1,500 boxes will be released. The Robusto size has a soft Cuban-press.

The Judge TAA Exclusive started out with a blast of pepper that soon gave way to sweet natural tobacco, earth, cedar, wood, and a slight chocolate note. The sweet natural tobacco moved to primary early on and the pepper settled with the other notes. As the cigar experience moved through the second third, there was an increase in the wood and cedar notes with the natural tobacco diminishing and the chocolate dissipating. The last third saw the cedar in control and the pepper spices moving back to the forefront. The earth and natural tobacco notes were not much of a factor. This is the way The Judge TAA Exclusive came to a close. The resulting nub was slightly soft to the touch and cool in temperature.

The TAA Exclusive is one of the bolder sizes in the Judge line. The Judge started out medium in strength and medium to full in body. By the second half, the strength moved to medium to full territory and by the final third the body was in full territory. The draw was on the open side. The burn did require frequent touch-ups to keep a straight burn path and straight burn line.

Flavor-wise, the My Father The Judge TAA Exclusive started out promising, but as the cigar progressed it got more ordinary, and the final third was more unbalanced as it was more spice heavy. I found The Judge TAA Exclusive to be a bolder offering than the other sizes of the line I smoked. I had some hopes this cigar would the best offering of the line, but in the end, it was not the case. The Judge didn’t have anything in terms of wow power, and other than being bolder, it didn’t distinguish itself as being a special size. In the end, The Judge falls into a category that any TAA cigars fall into – solid, but not living up to the expectation of anything special. It’s a cigar I’d recommend trying first before chasing this down.