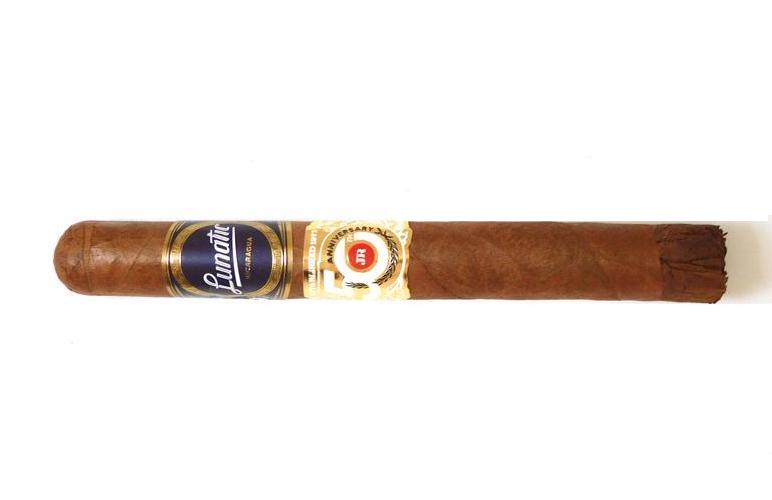 Back in 1971, Jack Rothman opened his first cigar store in New York City. That cigar store would grow and become JR Cigar. A year after opening his first store, Jack’s son Lew Rothman was approached by a customer asking if he could have cigars mailed back to his home state, leading to the creation of JR Cigar’s famous mail order business. Today JR Cigar is a part of the Tabacalera USA family and maintains both a brick and mortar and a mail-order business. This year is the 50th anniversary of JR Cigar and to mark the occasion, JR Cigar has teamed with several leading manufacturers and brands to create a collection of cigars. These cigars have been released throughout the 2021 calendar year. Today, we take a look at the fifth installment of the series – Aganorsa Leaf’s JFR Lunatic JR 50th cigar.

At press time, there have been nine releases in the JR 50th series. Some of these have come directly from the Tabacalera USA family (Romeo y Julieta, Montecristo and Aging Room). Others have come from companies outside of Tabacalera USA. It is anticipated there will be more JR 50th releases throughout 2021. 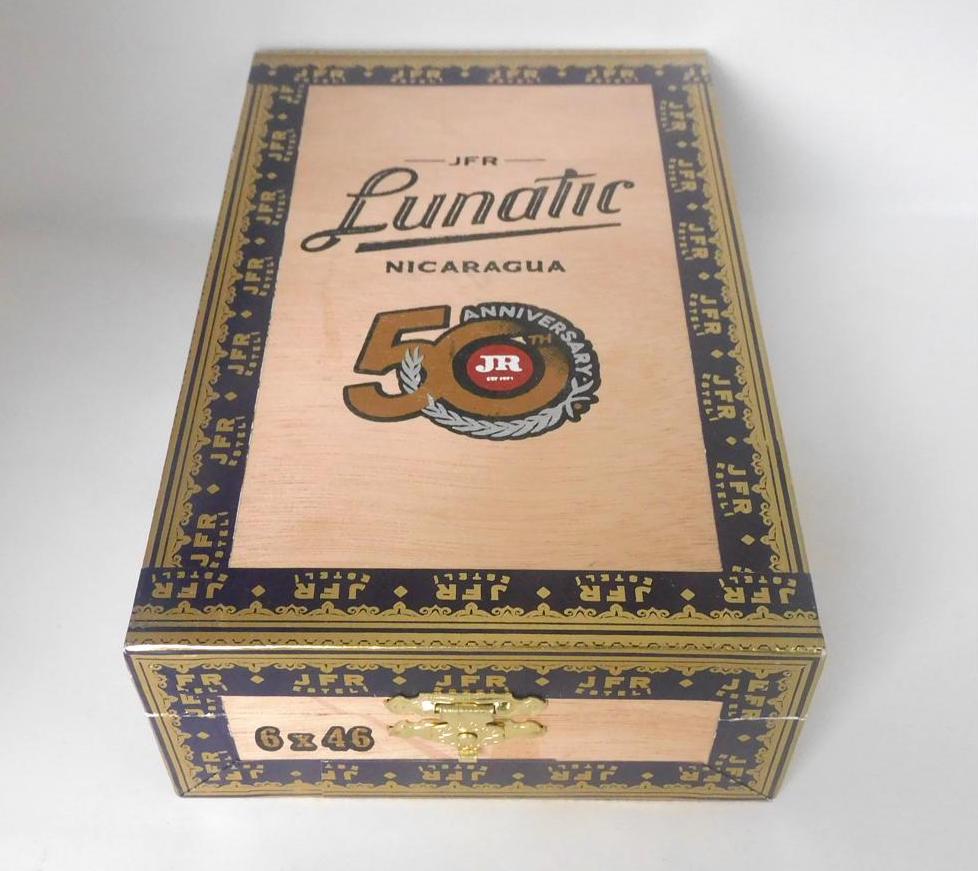 Without further ado, let’s break town the JFR Lunatic JR 50th cigar and see what it brings to the table:

The JFR Lunatic JR 50th was made available in one size – a 6 x 46 Corona Gorda. The cigars are presented in ten-count boxes. A total of 250 boxes were produced. 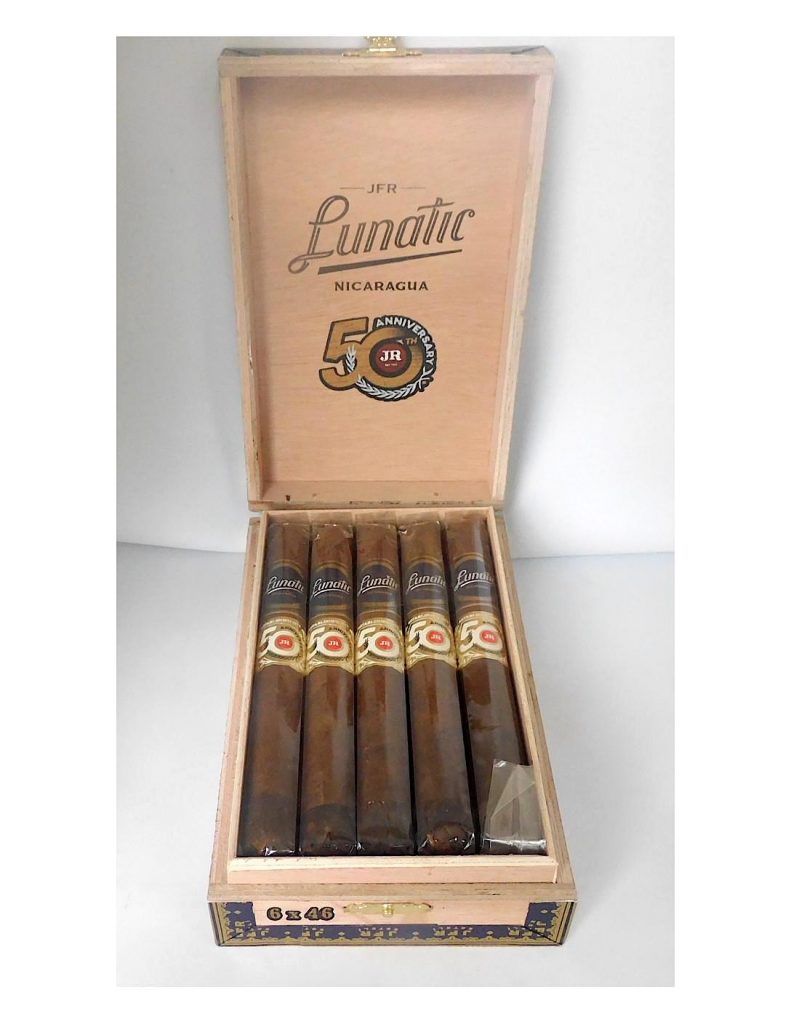 The Ecuadorian Habano wrapper of the JFR Lunatic JR 50th had medium brown color with a slight Colorado red tint to it. The wrapper had a light coating of oil and a silky complexion to it. There were some veins and some visible wrapper seams.

The JFR Lunatic line has been a home in the Aganorsa Leaf portfolio to some off-the-norm sizes and formats. In this case while the cigar is a 6 x 46 Corona Gorda, it does have 3/4 of an inch of a “rough cut” near the footer where there is no wrapper around the binder and filler. 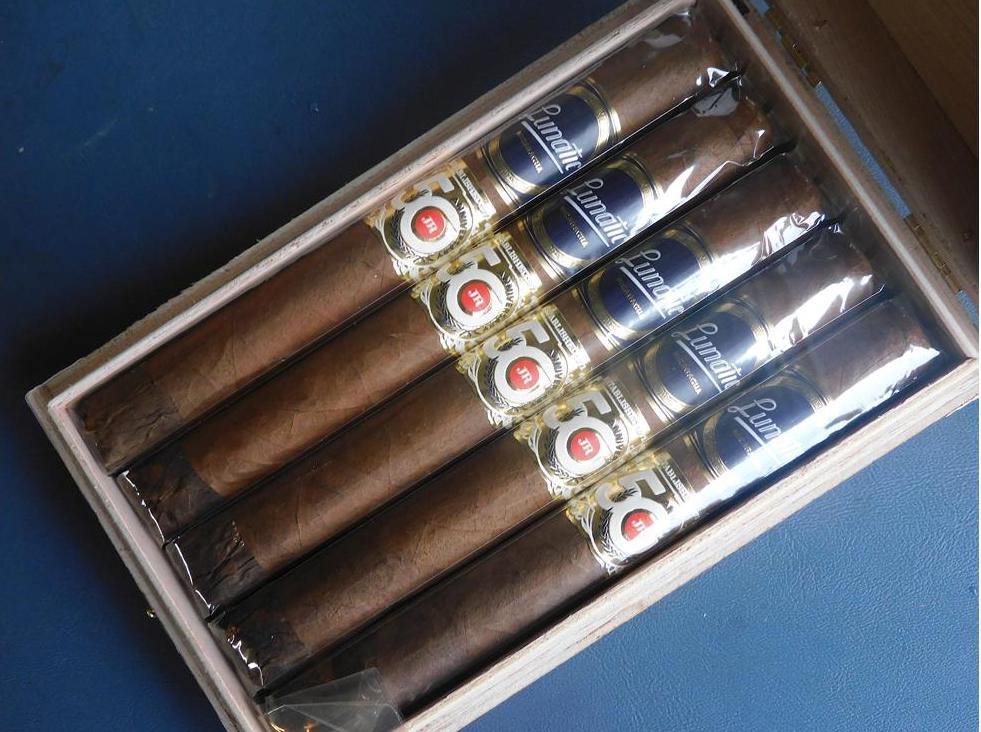 There are two bands on the JFR Lunatic JR 50th. The primary band has an indigo-colored circular field with the text “LUNATIC” in a white slightly cursive style font. Below the text is the text “NICARAGUA” in a smaller gold font. There is a gold ring surrounding the field with some indigo accents around it. To the left and right there are three gold and indigo crescent moon designs with leaf-like accents. The far left and right have gold and indigo wave designs. The band is finished with a thick gold trim.

The secondary band is one that is common to the JR 50th series. It is a gold band with the red, white, and black JR 50th Anniversary logo surrounded by white adornments. On top of the logo is the text “ESTABLISHED 1971” in white font.

Prior to lighting up the JFR Lunatic JR 50th, a straight cut was used to remove the cap. Once the cap was successfully detached it was on to the pre-light draw. The dry draw was quite simple – notes of earth and stone fruit. But that was all that was needed to provide a satisfactory pre-light draw. At this time it was time to toast up the footer of the JFR Lunatic JR 50th and await what the smoking experience would have in store.

As the JFR Lunatic JR 50th reached the midway point, the natural tobacco remained grounded as the primary note. The fruit note diminished in intensity and the graham cracker notes dissipated. There still were notes of earth, baker’s spice, and black pepper in the background. Once into the second half, the earth notes increased in intensity.

By the last third, the earth notes returned to the forefront and joined the natural tobacco notes. The pepper notes were a close secondary. Meanwhile, the stone fruit and baker’s spice were in the distant background. This is the way the JFR Lunatic JR 50th came to a close. The resulting nub was slightly soft to the touch and cool in temperature.

The JFR Lunatic JR 50th maintained a straight burn path and straight burn line from start to finish. Even during the rough-cut section, the burn remained quite clean. The resulting ash was nearly white in color. This wasn’t a firm ash, but it was not loose nor flaky either. As for the burn rate and burn temperature, both were ideal. 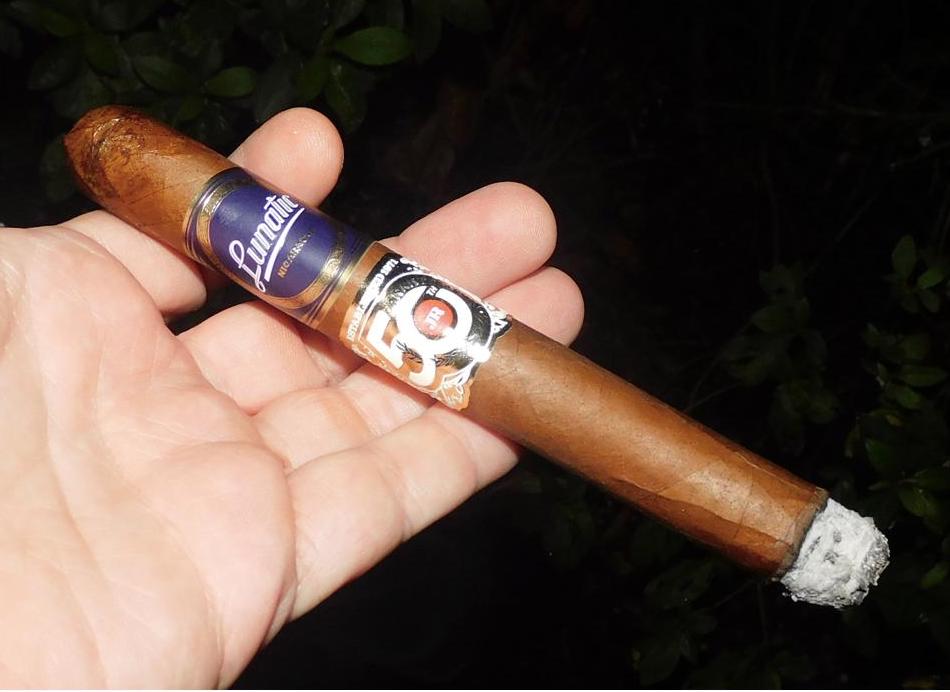 Burn of the JFR Lunatic JR 50th by Aganorsa Leaf

The draw of the JFR Lunatic JR 50th performed quite well. It had what Ben Lee has referred to as the “milkshake” draw – namely a draw with just enough resistance. I have always said a little resistance on the draw is ideal. At the same time it was a low maintenance to derive flavors from this cigar.

Overall I have been quite impressed with the JR 50th Anniversary releases. I’ve been intrigued with the concept of working with different manufacturers, and thus far I have been impressed with the releases. When it comes to Aganorsa Leaf, I usually gravitate more toward their Corojo or San Andres releases over their Habano releases.  But the JFR Lunatic JR 50th was definitely one of the more impressive Habano releases I have had out of Aganorsa Leaf. This is also one of the better installments of the JR 50th Anniversary series. This is a cigar that fires on all cylinders – flavor, complexity, and construction. In the end, this cigar is a winner. It’s a cigar I would steer toward a more seasoned cigar lover, but certainly wouldn’t discourage a novice from trying. As for myself, this is a cigar that I would easily smoke again – and make a box purchase of. At 91 points, this cigar exceeds the threshold for Cigar Coop Standard of Excellence.