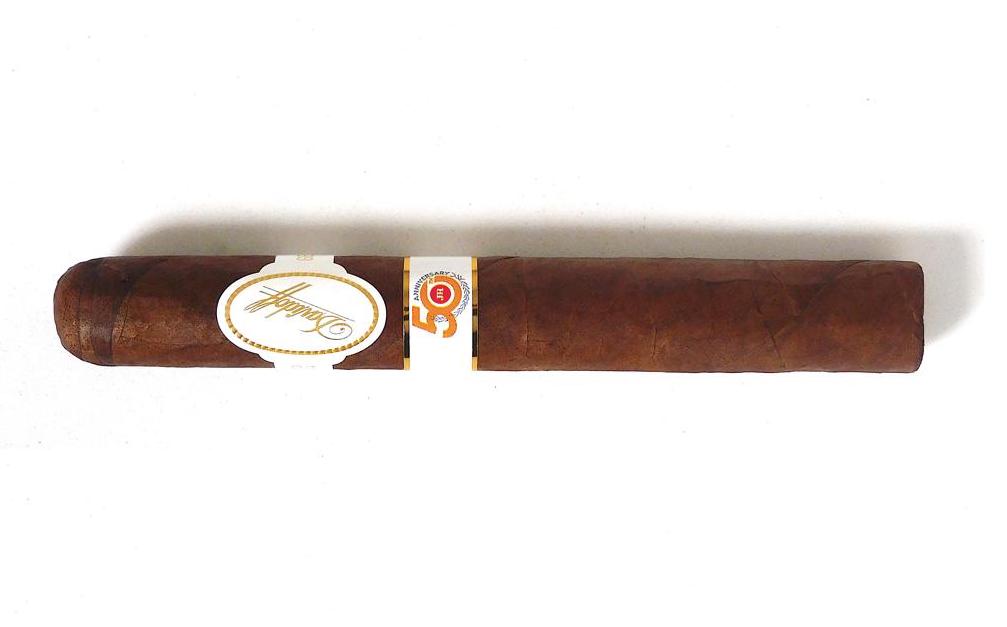 In 2021, JR Cigar celebrated its 50th anniversary in business. To commemorate the occasion, the company decided to work with its many partners and suppliers to create a series of limited edition 50th anniversary cigars. A total of 12 cigars were produced during the golden jubilee year, working out to approximately one cigar per month. The fifth installment of the series was announced back in May and it comes from Davidoff. Dubbed the Davidoff JR 50th, it is the cigar we now take a closer look at.

The start of JR Cigar goes back to 1970 when Jack Rothman (thus the name JR) opened his first cigar store in New York City. It was a year later when Jack’s son Lew Rothman was approached by a customer asking if he could have cigars mailed back to his home state, thus the famous JR Cigar mail-order business was born. Today JR Cigar is a part of the Tabacalera USA family and maintains both a brick and mortar and a mail-order business.

As for the 50th-anniversary series, there are four installments that come from the Tabacalera USA family (Romeo y Julieta, Montecristo, Aging Room, and the self-branded JR Ultimate line). For completeness, we list  all the cigars here.

For now, let’s turn our attention to the Davidoff JR 50th and see what this cigar brings to the table.

The Davidoff JR 50th consists of a four-country multi-national blend including an undisclosed Ecuadorian grown wrapper. A Mexican San Andres binder and a combination of Dominican and Nicaraguan filler. As with all Davidoff-branded cigars, production is handled out of Cigars Davidoff in the Dominican Republic

The Davidoff JR 50th is packaged in ten-count paper bundles. A total of 300 bundles were produced. 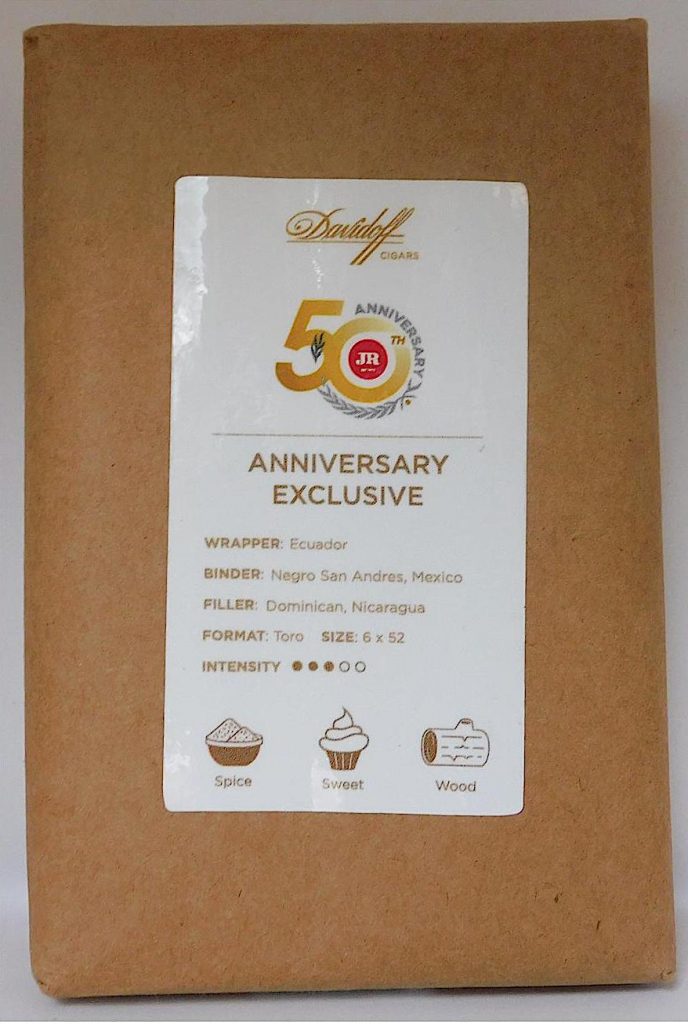 Packaging of the Davidoff JR 50th

There are two bands on the Davidoff JR 50th. The primary band uses the design of the Davidoff White label band. It features the name “Davidoff” in classic cursive gold font on an oval field of white. There are small gold circles going around the perimeter of the oval. The word “GENEVE” (in gold font) flanks to the right of the oval field. To the left of the oval is the text “LIMITED EDITION.”

The secondary band is one that is common to the JR 50th series. It is a white band with gold trim on the upper and lower part. The center of the band is the red, white, and black JR 50th Anniversary logo surrounded by black adornments.

A straight cut was used to remove the cap of the Davidoff JR 50th. Once the cap was removed, it was on to the pre-light draw ritual. The dry draw delivered a mix of leather, earth, floral, and a slight natural tobacco note. Unfortunately, this was not a pre-light draw that had me doing handstands as it was not enjoyable. Since the pre-light draw is not scored, there is no loss of points, nor does this affect the value rating. At this point, it was time to light up the Davidoff JR 50th and see what the smoking phase would have in store.

The sticker on the bundle mentioned the types of flavors the Davidoff JR 50th would deliver “Spice – Sweet – Wood.” As the cigar experience commenced, there were definitely notes falling into those categories. The notes delivered were wood, hay, natural tobacco, black pepper, floral, and fruit notes. During the first third, the wood, fruit, and floral notes moved into the forefront with the other notes settling in the background. There was an additional layer of wood and fruit notes on the retro-hale.

By the second third of the Davidoff JR 50th, the wood notes emerged as the lone primary note. The floral notes were the most prominent of the secondary notes with the hay, natural tobacco, black pepper, and fruit notes rounding out the flavors in the background. Later in the second third, there was a slight increase in the pepper.

By the final third, the wood notes were primary. The pepper notes joined the floral notes as the most prominent secondary note. There were still touches of hay, fruit, and natural tobacco in the background. By the time the experience of the Davidoff JR 50th closed out, the flavors were on the muddled side. The resulting nub was soft to the touch and cool in temperature.

The burn of the Davidoff JR 50th required multiple touch-ups in order to maintain a straight burn path and straight burn line. The number of touch-ups needed was above the norm. The resulting ash wasn’t overly firm. It had some flaking and flowering along the way. This was an ash that was silver-gray in color. As for the burn rate and burn temperature, both were ideal. 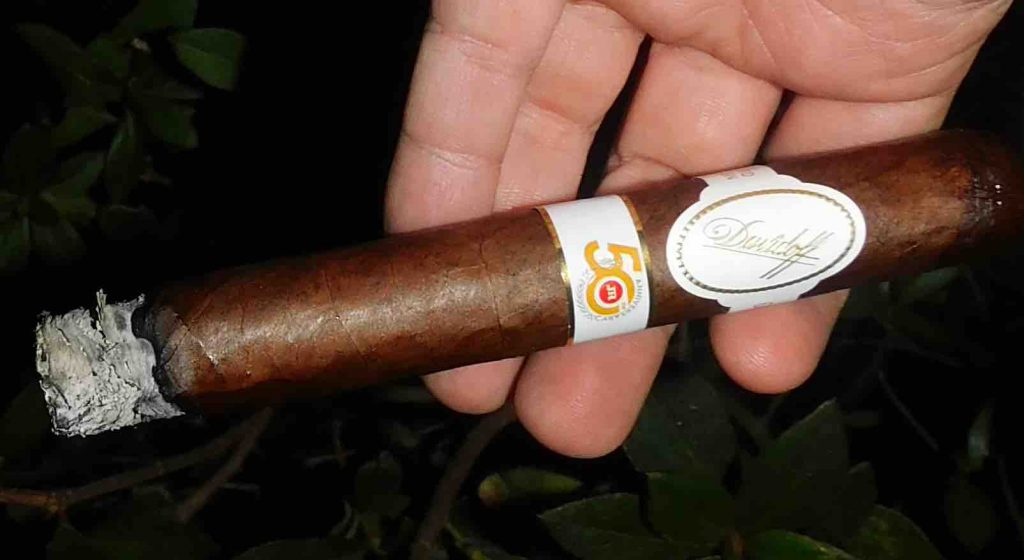 Burn of the Davidoff JR 50th

The draw to the Davidoff JR 50th was on the open side, but not overly loose. Normally I prefer a little more resistance on the draw. This had no adverse effects other than the draw was more open than I prefer. Meanwhile, the cigar produced ample layers of smoke.

The Davidoff JR 50th is a cigar that was bolder than most Davidoff White Label cigars that have been produced. This was a cigar that was medium in strength, but medium to full in body. In terms of strength versus body, the body held the edge from start to finish.

When it came to flavor, the Davidoff JR 50th was simply not in my wheelhouse. This was a cigar that was wood-forward with floral notes – and that is something that just tends to not connect with me. At the same time, I do recognize there are people who do enjoy cigars with that profile. Still it would not be fair to sugar coat this and say I wasn’t disappointed with the Davidoff JR 50th – because I was. It is also not an inexpensive cigar – coming at over $33.00.  If this wood-floral forward flavor profile is for you, you may want to try a sample first before investing in this bland.