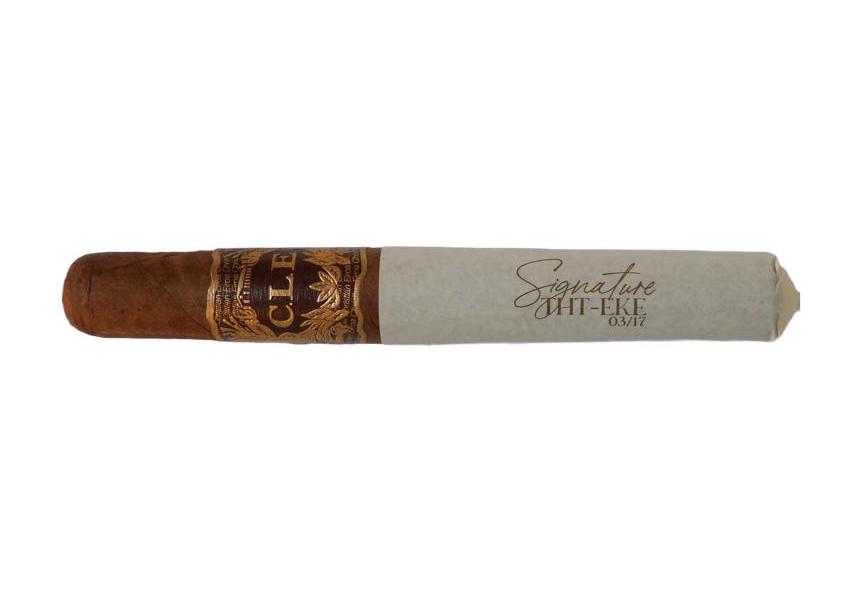 For its installment into the 2021 Tobacconists Association of America (TAA) Exclusive Series, CLE Cigar Company decided to drop an 11/18 version of its CLE Signature Series THT-EKE 03/17. The THT-EKE 03/17 made its debut at the 2021 Premium Cigar Association (PCA) Trade Show and its the latest blend to be installed under Christian Eiroa’s CLE Signature Series. The THT-EKE 03/17 uses a Cameroon seed wrapper grown in Honduras at the Eiroa Tobacco Farm. We’ve seen this wrapper used first on JRE Tobacco’s Aladino Cameroon line and also on CLE’s PCA Exclusive Cigars. 11/18 is a size introduced by Eiroa during his Camacho days. The name pays homage to the birthday of Christian Eiroa’s mother (November 18th). The vitola is a shape that is cylindrical that has tapering on both ends, but is not tapered as narrow as a perfecto or salomon. Eiroa has brought the 11/18 size into CLE Cigar Company and it has been used on several offerings. As for the name THT-EKE 03/17, not much is known about that. Today, we take a closer look at the CLE Signature THT-EKE 03/17 11/18 and see what this cigar brings to the table.

There have been a total of eight TAA Exclusive releases by CLE Cigar Company. The CLE Signature THT-EKE 03/17 11/18 was the seventh release of the series.

Without further ado, let’s break down the CLE Signature THT-EKE 03/17 11/1 and see what this brings to the table.

In addition to the Honduran-grown Cameroon wrapper, the remainder of the blend is undisclosed. Production is handled at the CLE Factory located in Honduras.

The Honduran-grown Cameroon wrapper on the CLE Signature THT-EKE 03/17 11/18 had a wood-like color to it. Upon closer examination, there was some subtle mottling present on the wrapper. The wrapper did not have much in the way of oil on it. There were some visible veins and visible wrapper seams. The 11/18 is tapered on both ends with its thickest ring toward the center of the band. 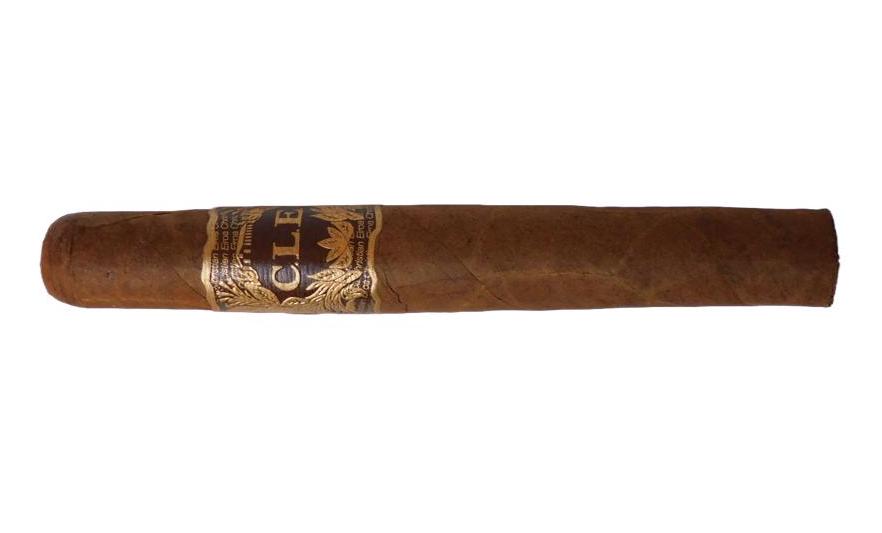 After removing the tissue sleeve of the CLE Signature THT-EKE 03/17 11/18, a straight cut was used to remove the cap of the cigar. From that point, it was on to the pre-light draw ritual. The cold draw delivered a combination of classic wood notes and natural tobacco sweetness. It was a simple, but satisfying pre-light draw. With the pre-light draw completed, it was time to toast up the CLE Signature THT-EKE 03/17 11/18 and see what the smoking experience would have in store.

The CLE Signature THT-EKE 03/17 11/18 started out with notes of sweet natural tobacco, white pepper, cedar, cream, and earth. Early on the natural tobacco, cream, and cedar notes moved into the forefront and the earth and pepper notes settled in the background. As the cigar moved through the first third, the sweetness split off from the natural tobacco and a lemon-citrus note emerged. The citrus, cream, natural tobacco, and cedar notes remained in the forefront. In addition, some tannic notes joined the earth and pepper in the background. Meanwhile, the retro-hale started out with notes of white pepper and was joined by some lemon notes.

During the second third of the CLE Signature THT-EKE 03/17 11/18, the lemon citrus and cream moved into a secondary note. The earth notes increased in intensity. Before the midway point, the earth joined the natural tobacco in the forefront, then took over as the sole primary note as the second half commenced. The tannic notes also increased in the second third. In the latter part of the second third, the earth notes were primary with the natural tobacco, citrus, pepper, cedar, and tannic notes all rounding things out. The creaminess present earlier had subsided.

The final third saw some bread notes join the earth notes. This was rounded out by the tannic, natural tobacco, lemon, and cedar notes. There was more in the way of pepper than sweetness driving the flavor profile during this phase, but it was far from a pepper bomb. This is the way the CLE Signature THT-EKE 03/17 11/18 came to a close. The cigar closed with a soft and cool nub.

The CLE Signature THT-EKE 03/17 11/18 required several touch-ups to maintain a straight burn path and a straight burn line. The number of touch-ups needed was more frequent than I preferred. The resulting ash was silver-gray. This was a loose and flaky ash. As for the burn rate and burn temperature, both were ideal. 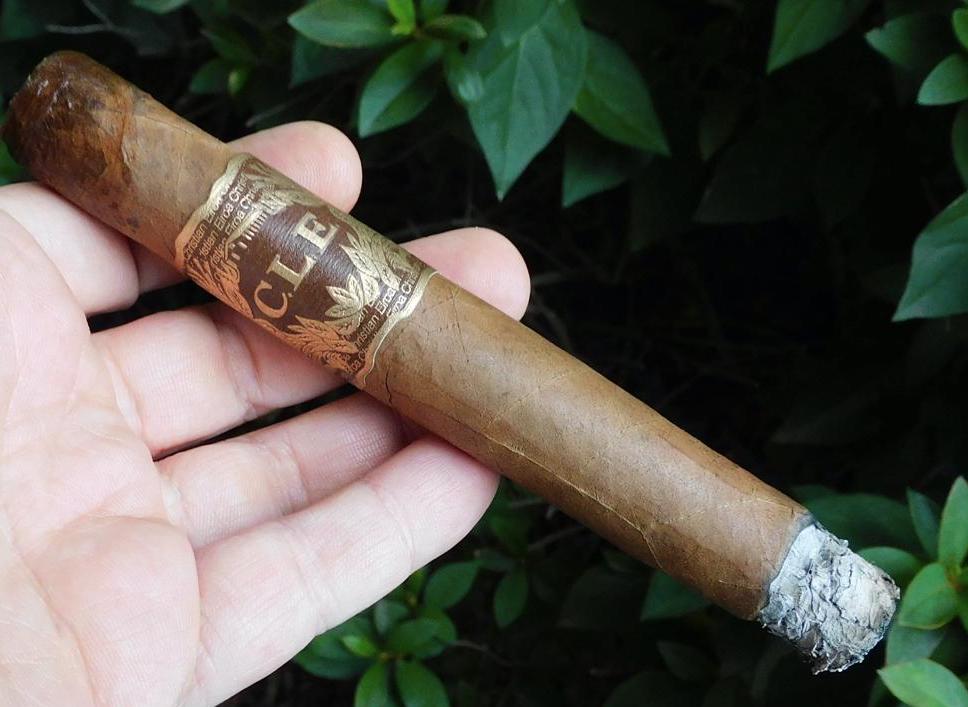 The draw to the CLE Signature THT-EKE 03/17 11/18 was on the open side. Normally I prefer a draw to have a little more resistance. Ultimately, the open draw didn’t have any adverse effects on the cigar experience.

Overall, the CLE Signature THT-EKE 03/17 11/18 started out as a medium-strength, medium-bodied cigar. For the most part, the strength level remained in the medium range of the spectrum. The body picked up in the second third and moved into medium to full territory where it remained for the duration of the smoking experience. For most of the smoking experience, the body maintained a significant edge over the strength.

The CLE Signature THT-EKE 03/17 11/18 started out quite promising as I really enjoyed the first third. As the cigar entered the second third, the experience began to deteriorate. The rise of the tannic notes simply did not help the experience. The last third was quite muddled and the wonderful flavors of the first third were simply not there. At $17.86, this is not an inexpensive blend. In the end, it’s a decent cigar that scores a respectable 88. However, with this cigar’s price point, the CLE Signature THT-EKE 03/17 11/18 is one for which I recommend trying a sample first. It’s certainly not a cigar I would say is TAA-worthy.