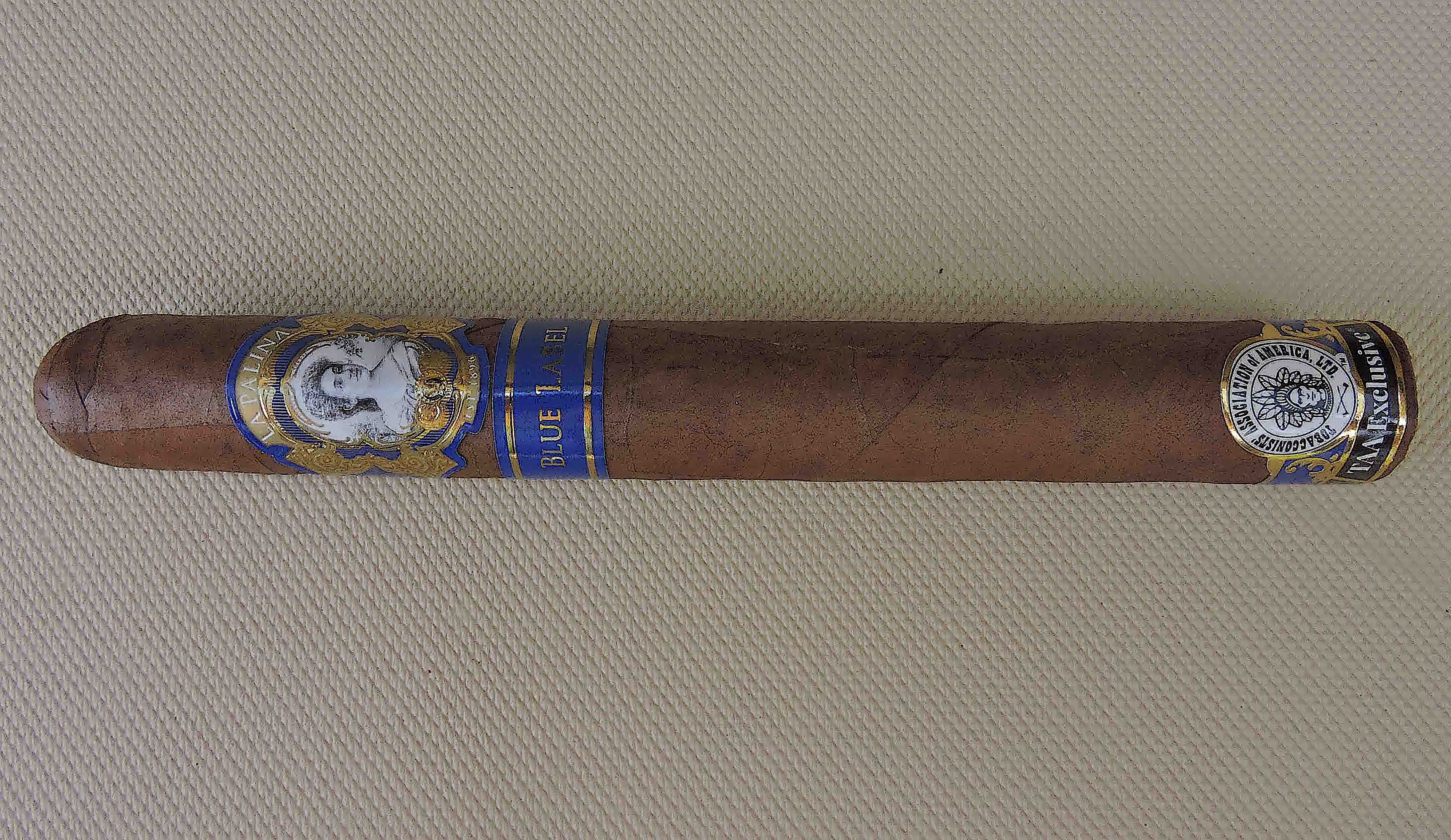 Without further ado, let’s break down the La Palina Blue Label Toro TAA Exclusive and see what this cigar brings to the table.

The La Palina Blue Label consists of a Habano wrapper over a Honduran binder and a combination of Honduran and Nicaraguan tobaccos. The cigar is produced at the Plasencia’s El Paraiso factory. This is a factory where La Palina has been doing production for several of its lines including La Palina Bronze Label, the soon to be released La Palina Silver Label, and the La Palina El Año 1896.

The past couple of years has seen La Palina move several of its lines to the Plasencia’s El Paraiso factory.

Following the release of the Toro for the TAA, the La Palina Blue Label is now regular production with the Robusto and Gordo sizes added. Each of the three sizes is presented in 20-count boxes.

The Honduran wrapper of the La Palina Blue Label TAA Exclusive had a medium to dark color with some Colorado mixed in. There was a slight amount of oil on the wrapper. While there were some thin visible veins and thin visible wrapper seams, this was a relatively smooth wrapper.

There are three bands on the La Palina Blue Label Toro TAA Exclusive. The primary band is a variation of the classic La Palina band found on several other La Palina lines. The band features the black and white image of Goldie Paley on the front-center on the band. The image is surrounded by blue-colored frame. The upper part of the band has the text “LA PALINA” in a thin white font on a gold background. Below the image is the text “EST 1896” in a smaller white font that is also on a gold background. There are also three medallions just below the image. There is a thick blue stripe to the left and right of the band with two gold colored pinstripes sitting on the upper and lower portions of it. On the blue stripe are a stream of gold colored fleur-de-lis images.

There is a secondary band resting just below the primary band. It is blue in color with the text “BLUE LABEL” in gold font resting on it. The band is finished with a gold pinstripe across the top and bottom.

Finally, there is a footer band on the La Palina Blue Label Toro TAA Exclusive. While the two upper bands have been carried over with the regular production offering of the La Palina Blue label, the footer band is unique to the TAA release. The upper portion of the band has a blue stripe with gold trim. Sitting on the blue stripe is a black and white TAA logo. The lower portion is black with gold trim with the text “TAA Exclusive” in white font.

The La Palina Blue Label Toro TAA Exclusive started out with a mix of black pepper, cedar, natural tobacco, citrus, and earth. Early on the natural tobacco and earth notes moved into the forefront. The cedar and pepper notes settled in the background. As for the citrus, there were times that during the first third it made its way into the forefront.

As the La Palina Blue Label Toro TAA Exclusive moved through the second third, the natural tobacco notes remained primary, however, there was more of a bitter component. The black pepper was the most prominent of the secondary notes with the citrus, cedar, and earth more distant.

The last third didn’t see much in the way of changes. The bitterness and spice certainly didn’t wow me, I wouldn’t translate this to harshness either. This profile continued until the end of the cigar experience of the La Palina Blue Label Toro TAA Exclusive. The cigar finished up with a cool nub that was slightly soft to the touch. 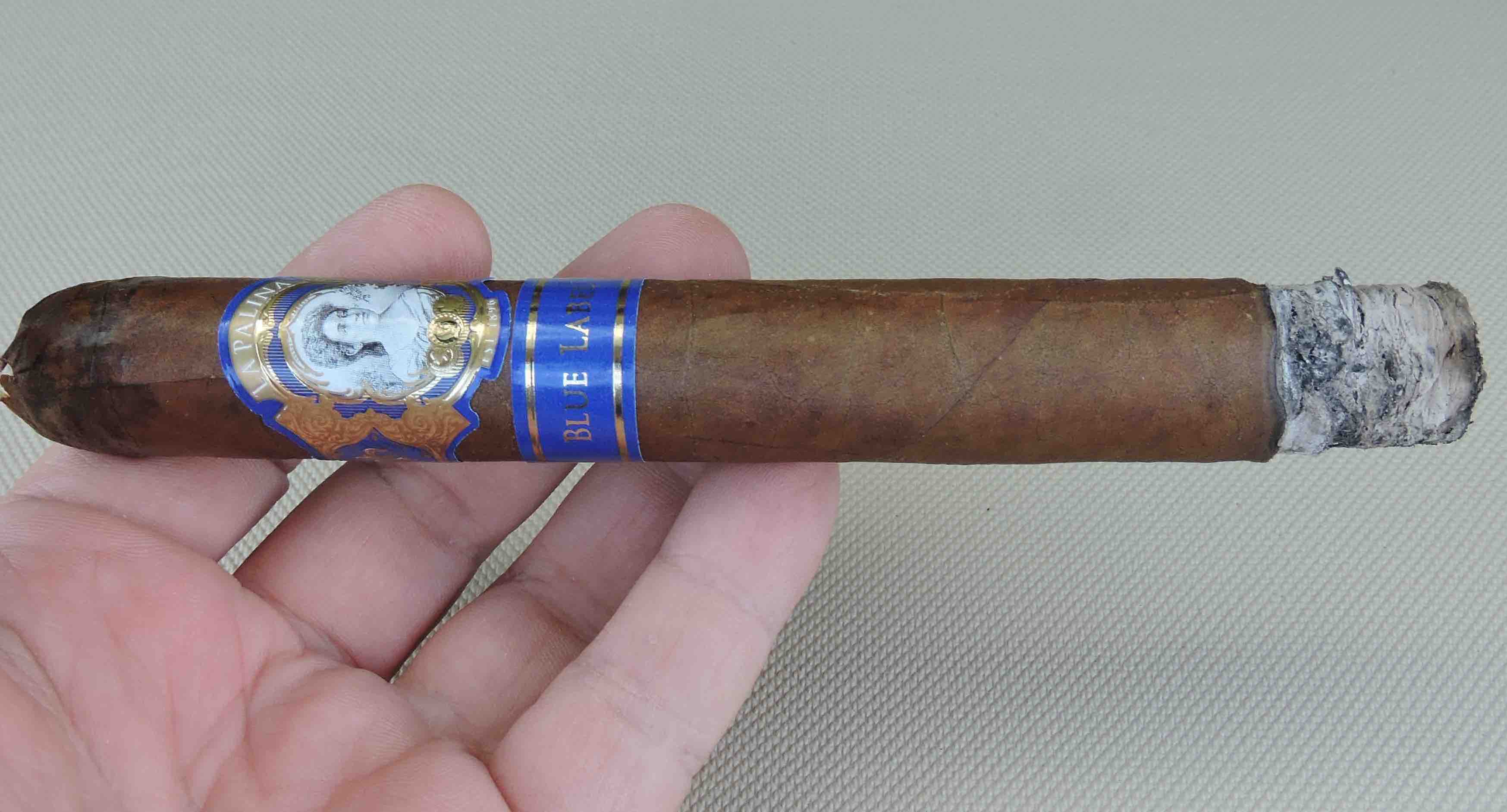 The draw to the La Palina Blue Label Toro TAA Exclusive also performed well. There was a touch of resistance on it – which is something that I consider to be ideal. This was a cigar that also produced a nice amount of smoke production.

My summation of the experience with the La Palina Blue Label Toro TAA Exclusive has been much like many of the other TAA releases I have smoked. It’s an average cigar, but it’s not one that I feel lives up to the TAA’s mantra of being a collection of the “best of the best”. This cigar certainly has excellent construction, but that’s not enough to call a cigar excellent. Flavorwise, the Blue Label Toro TAA Exclusive started out decent enough, however, some of the bitterness and spice present during the second half did throw the balance of this cigar off. While you can now get this cigar in regular production, I would recommend trying a sample first to see if the cigar is satisfying.