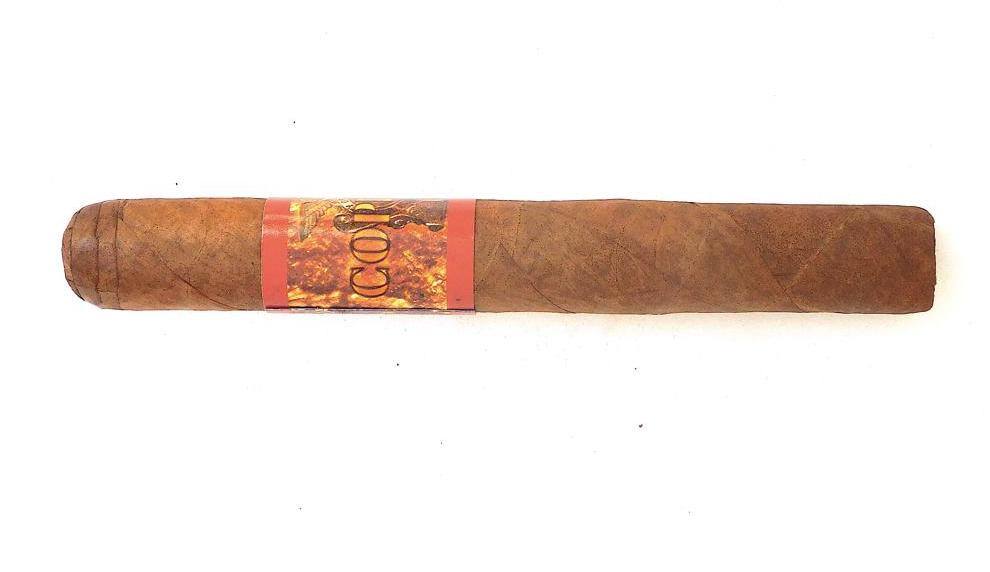 Protocol Cigars probably is the best example of the “Little Engine That Could” in the cigar industry. The company has been around for six years and has built up a portfolio (at press time) of nine core line blends and a very loyal fan base following. At the same time, the company has used that success and has launched a series of limited editions. These have taken on the form of one-time limited edition, single-store ongoing release, or event cigars. At press time there have been about 16 of these limited editions. One thing that is quite impressive is the passion and energy Protocol Cigars puts in these releases. Early in 2021, Protocol released its first cigar of the year – an ongoing single store release for Vintage Cigar Lounge in Westerly, Rhode Island known as the Protocol Coppers. It’s the cigar we are going to take a closer dive into today.

Below is a list of the Protocol limited releases

When we reported on the launch of Protocol Coppers, we covered the origins of the name, its connection to Vintage Cigar Lounge, and how the theme was incorporated into the packaging.

Protocol Coppers keeps to the law enforcement theme of Protocol Cigars. In the case of Vintage Cigar Lounge and Club, it is a retail establishment that is law enforcement owned and operated. “Coppers” is an old time word for police officers. The name was derived from the fact that roofing material was used to make police officer badges. In Britain, the police also received that name because of the shiny buttons on their uniforms. Given the origin of the name “Coppers” and that the cigar is for a place called “Vintage Cigar Lounge,” a vintage look was incorporated into the packaging.

Without further ado, let’s break down the Protocol Coppers and see what the cigar brings to the table.

Like all Protocol Cigars, Protocol Coppers is produced at Erik Espinosa’s La Zona factory in Estelí, Nicaragua. It consists of an Ecuadorian (Habano) Rosado wrapper over a Nicaraguan-forward blend. One thing that is noteworthy is the use of Dominican tobacco in this blend.

Protocol Coppers is offered in one size – a 5 5/8 x 46 Corona Gorda. The initial production run was 200 ten-count bundles, but the intention is to keep this as an ongoing production offering for Vintage Cigar Lounge. 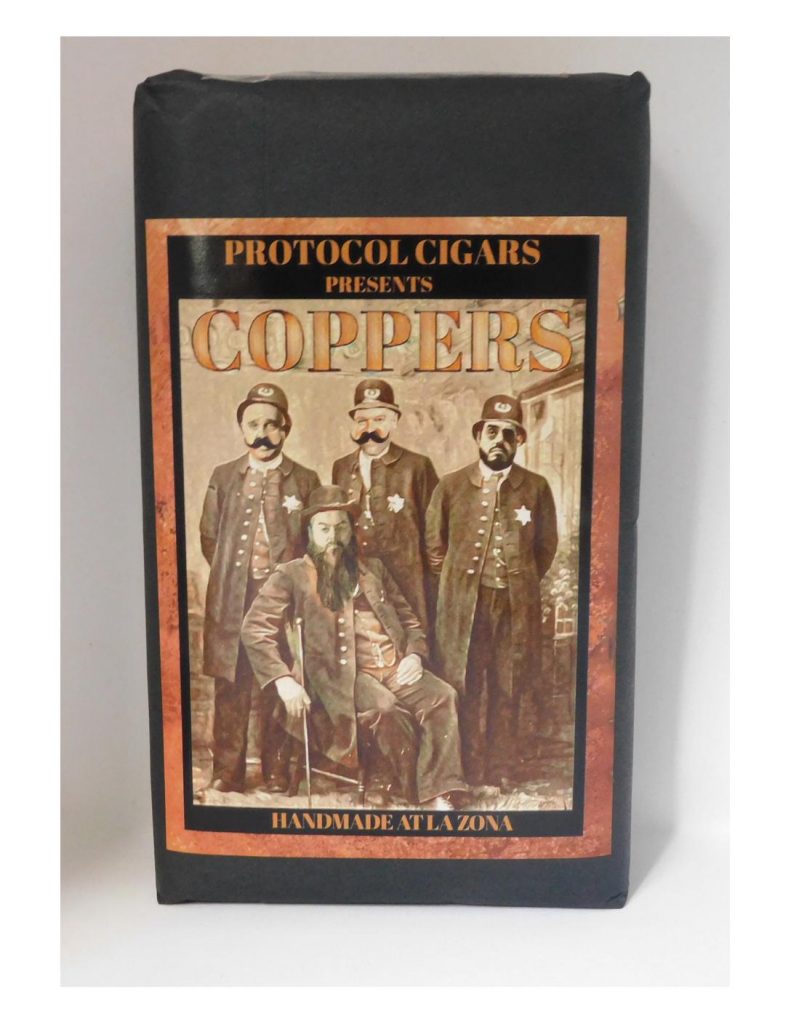 Packaging of the Protocol Coppers

The band to the Protocol Coppers is a band that had a bronze, brown, and earth tones color scheme. There is bronze colored trim on the top and bottom. On the center of the band is a police badge design. Draped across the badge is the text “COPPERS.”

A straight cut was used to commence the cigar experience of the Protocol Coppers. Once the cap was removed, it was on to the pre-light draw experience. The dry draw delivered notes of earth, cedar, and a slight fruit sweetness. This was a relatively straight-forward and satisfying pre-light draw experience. At this point, it was time to toast up the foot of the Protocol Coppers and see what the smoking experience would have in store.

At the start of the second third of the Protocol Coppers, the cedar notes became more prominent. There were times the earth notes floated into the background before reappearing in the forefront. During this phase the fruit notes diminished in intensity while the black pepper notes increased in intensity.

In the final third of the cigar experience, the cedar continued to be grounded in the forefront. Sometimes cedar can be overpowering, but I didn’t find this the case. The earth, pepper, and fruit notes all rounded out the flavor profile. The pepper was more prominent than at any time of the smoking experience, but still remained a background note. This is the way the Protocol Coppers came to a close. The resulting nub was soft to the touch and cool in temperature.

While there was an occasional bit of jaggedness on the burn line, the burn of the Protocol Coppers mainlined a straight burn path and it was a low maintenance burn in terms of touch-ups. The resulting ash was silvery gray and mostly skewed toward the firmer side. As for the burn rate and burn temperature both were ideal. 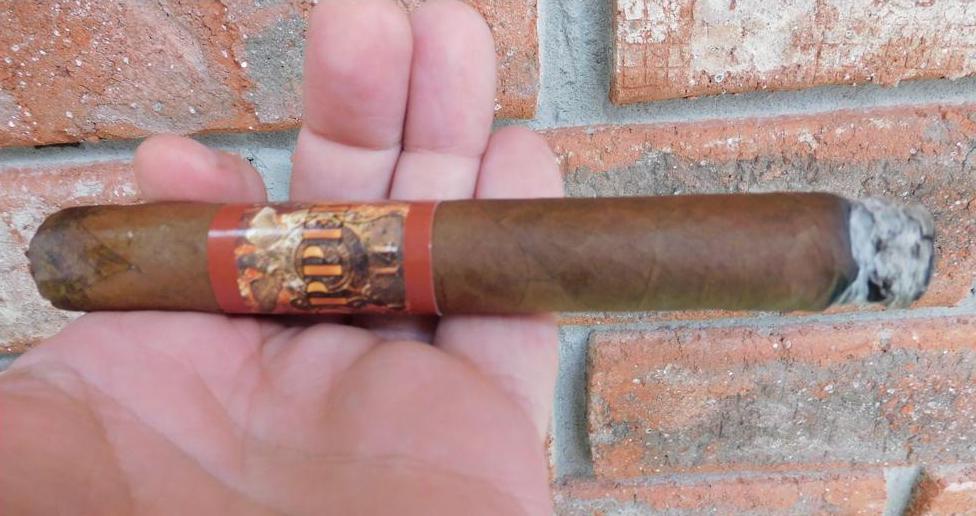 Burn of the Protocol Coppers

The draw of the Protocol Coppers was on the open side. While it didn’t affect the combustion or burn rate, it still was a burn that I felt was more open than I prefer.

A side note before my summarization of the overall smoking experience: While normally I am not a fan of packaging cigars in craft paper bundles, I must commend the packaging here. I love the artwork on both the bundle label and the band. There also was something with the band that really aligned with the wrapper of the cigar. The band had contemporary elements, but kept to a “vintage feel.”  Appearance and packaging are not factored into the score, but in this case, they deserve some praise.

In terms of the cigars experience, the Protocol Coppers is a relatively straightforward cigar. It’s not going to deliver a ton of flavor transitions or permutations of flavor nuances, but the flavors that were delivered were quite enjoyable. There was enough kick with this cigar to satisfy the most ardent La Zona fans. In the end, the Protocol Coppers is probably a cigar I’d steer to an experienced cigar enthusiast who doesn’t have an aversion to some spiciness. At the same time, it’s a cigar I could encourage most cigar enthusiasts to try. As for myself, this is a cigar I would buy and smoke again.