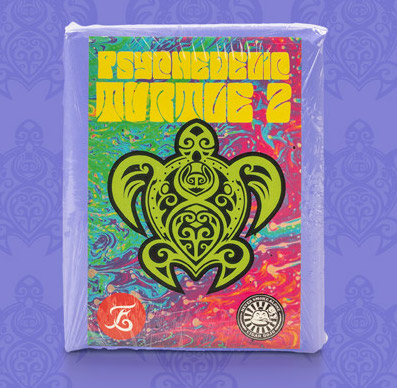 Cigar Dojo and Espinosa Premium Cigars have come together for a fifth collaboration, the Psychedelic Turtle II.

Psychedelic Turtle II follows up the previous collaboration, 2019’s Psychedelic Turtle, but features an all-new blend out of AJ Fernandez’s San Lotano factory in Ocotal, Nicaragua. This includes a Mexican San Andres wrapper, Jalapa binder, and fillers from the Condega, Jalapa, and Ometepe regions of Nicaragua. Psychedelic Turtle II is a 5 x 56 “turtle (box) pressed” Robusto Grande. The cigars will be sold in ten-count bundles at JR Cigar priced at $89.99 per bundle. A total of 500 bundles has been produced.

The cigars will feature different colored bundle wraps as well as different color ribbons on the footer. Ten bundles include a “Golden Ticket” prize which includes a free pass (excluding airfare and lodging) to Espinosa’s La Zona Palooza event in November. In 2019, the original Psychedelic Turtle contained three golden tickets. According to Espinosa Cigars, none of those original three golden tickets were claimed.

The cigars are scheduled to be released August 6th online at jrcigars.com

At a glance, here is a look at the Psychedelic Turtle II: